A detective in a super-powered world. 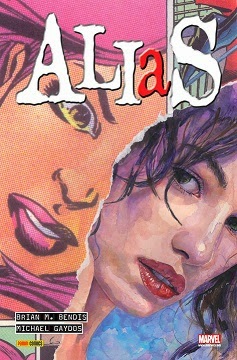 One of the benefits of working in a library is that your co-workers always have good reading suggestions!  After discussing comics one day my co-worker said he would let me borrow a comic he liked a lot.  It was the five collected volumes of Alias.
Alias tells the story of a private eye who used to be a superhero.  She still has powers but no longer fights crime in costume. It was one of the “mature” titles put out by Marvel a while back.
I like detective yarns, especially the more hard-boiled ones (like Andrew Vacchs) so the tone of this was right up my alley.  It is a well-written comic that, while it touches upon superheroes and such, actually concerns itself more with the lives affected by superheroes.  These things are rarely explained in regular comics.
The first volume is the best, with the story sucking you in quickly and the plot moving along at breakneck speed.  As the series progresses, more of the focus is on the protagonist’s personal life and internal monologues about herself, and less on the actual cases she is working on.  Because of this the latter volumes are less interesting.

The final volume explains how the protagonist got her powers originally, which is an old comic-book trope, and really doesn’t do anything to further the story as it was set up initially.  I wish Marvel had allowed Mr. Bendis to use more of Marvel’s superhero characters.  It would have made for a more interesting story overall.  Marvel, while trying to tap into mature readers, ended up handcuffing their writers and artists, causing the Marvel Max imprint to die off.  Overall, this comic had a great beginning, great potential, but it was limited too much in its scope, suffering because of this.  Marvel couldn’t have its cake and eat it too.
Posted by Rob Instigator