Is Mind inherent in all of Existence? How can it not be? 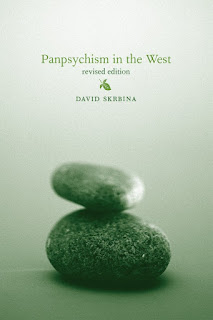 It has been almost 4 years since I first began posting reviews of the books I read on this blog, RXTT’s Intellectual Journey.  One of the most gratifying and unexpected outcomes of this project has been the ability to correspond with some of the authors of the books I read.  It always thrills me when they reply to my communications.  One of the many who I have had a chance to correspond with has been mathematician, educator, and cyberpunk O.G. Rudy Rucker.  I always make sure to ask these authors if they can suggest any reading recommendations, and Rudy Rucker told me that this book, Panpsychism in the West, was one to check out, as he had recently enjoyed it very much.  The name David Skrbina was familiar to me based on various references to him and his writing in other books I read.  It was awesome to have such a great recommendation, and greatly appreciated.

This book details the development, discussion, history, and possibilities of the philosophical idea called Panpsychism.  This idea suggests that the entity we call Mind is inherent in all of existence, and that this should affect everything about how we see ourselves, life, and the whole of existence.  Many of the Greek philosophers, who first pondered the reality of the world around us, our bodies, and our minds, came to the conclusion that Mind, consciousness itself, was an underlying part of everything that exists.  One of the arguments for this was that human beings feel they have a mind separate from the nuts-and-bolts physicality of their brain.  However, Humans are created from the very same stuff as everything else, and because of this our “Minds” cannot be a special occurrence.  Some form of “Mind” must exist in any and all life, and possibly into inanimate matter we deem to be not alive, perhaps even to the basic building blocks of matter.  They saw the human body as an aggregate of its many parts, and because of this, the parts themselves must have had some sort of “Mind”, just as the bigger systems around us, the atmosphere, the water cycle, the Earth itself, must also have a “Mind” constituent.

Later Greek philosophers would turn from this idea and head towards a mechanistic and non-spiritual perception of the Universe around us.  These ideas led to the Materialist universe in which modern humans exist.  We are told that the Mind is either purely a god-given trait solely found in Humans, or that the Mind sprang up only in Humans because we were the only ones to have a  complex enough nervous structure and brain to achieve this.  These human-centered objections to panpsychism have been put forth by philosophers and scientists throughout human history.  They only serve to point out the inherent bias among thinkers who ascribe all experience value based on their personal state, that of being a human on Earth.  They demean the experiences of animals, plants, and even rocks as purely mechanistic, even as they aggrandize the human experience.  This seems a contradiction to me.

Once the mechanistic worldview of Isaac Newton and classical physics began to influence the world, philosophers sought to discredit the idea of panpsychism by exclaiming that it was unscientific, in that there was no empirical way to test whether a rock or a tree has a Mind.  The blind-spot in their arguments is that, as of today, there is no way to empirically prove that a human has a Mind!  If it cannot be proven to exist in us, how can they be so sure it does not exist in the world around us?  Too many people run with this argument and fail to understand that panpsychism is not a scientific idea, but a philosophical one.  Empirical science can analyze a brain, the neurons and axions that make up the physical brain, and the various blood vessels that nourish and clean the brain, but they cannot in any way analyze the Mind.  Psychologists have tried, with varying degrees of failure, to analyze Mind as separate from the physical brain.  Psychiatrists try to utilize medicines and chemicals to force the physical brain into adjusting the process of the non-physical Mind.  It is a very confusing state of affairs.

David Skrbina has done a great job of compiling not only the various supporting ideas and players throughout human western culture to discuss panpsychism, but also of the many philosophers and scientists who sought to deny panpsychism.  He explains how they came to their negations, and the ways in which they misunderstood the basic concept of panpsychism.  Many philosophers would push these ideas only to negate them later on in life.  Yet others, people who decried the possibility of panpsychism, came around in their later years and admitted that there is no way to discount the idea.  How their ideas went on to influence those that followed, and how the possibilities inherent in panpsychism would change the entire world-view of the whole of humanity is a focus of the later part of this book.

Philosophy as a field of study for me is very frustrating.  I find it hard to read the conclusions and assertions of philosophers whose base assumptions are inherently opposed to how I see the world around me.  It is very hard to argue with a dead philosopher!  I love to know the history of human thought and the development of our ideas on ourselves, but so much of it is purely fantasy, conceptualized reactions to embedded presumptions.  I feel that, as a basis of thoughtful exploration, it is much more valuable and realistic to assume that, just as we are part of the Universe, and have a level of awareness we call Mind, that every other constituent part of the Universe, both smaller and bigger than the cellular aggregate we call a human being also shares in this noetic quality.  It is impossible to draw a line of demarcation where Mind exists and then where it does not.  For example, we can say humans have Minds.  Many of us feel that our pet dogs and cats have their own Minds and personalities, independent of their physical being.  Is that the end?  Why wouldn’t smaller animals, such as mice or beetles or even amoebas, also share in this feature of existence we label a Mind?  If a one-celled organism can have a Mind, what about the single-cells that make up all living beings’ body structures?  If a cell can have a sliver of consciousness then what about the component parts of that cell?  Digging lower, what about the individual molecules and atoms?  What about the constituents of atoms?  No one can provide a definitive answer to where the line should be drawn.  Going bigger than humans, are larger aggregates like cities, mountains, oceans, planets, galaxies all possessed of a higher level of mind that we humans just cannot comprehend?  This book has given me quite a lot to think about.  It is highly recommended.

(The 2017 Revised edition of this book is available for purchase here: PANPSYCHISM IN THE WEST  )
Posted by Rob Instigator