Alan Moore Took Swamp Thing Where It Needed To Go 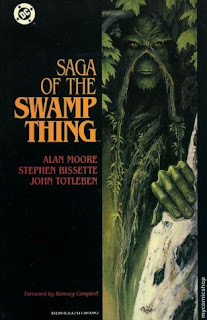 In my youth, I was always on the hunt for new and interesting comic books.  I was very fortunate, as the 1980’s were a great time for innovative storytelling and many comic book creators took the art form to new heights of intensity, storytelling, and beauty.  One of the premier writers in comic books at the time was Alan Moore.  His epic story, The Watchmen, is one of my all-time favorites.  An early work that Alan Moore devoted years to in the 1980’s was the comic book Swamp Thing.  After decades, I was finally able to sit and absorb the full run of Alan Moore penned Swamp Thing stories.  They were even better than I expected.

Swamp Thing has always been a “horror” comic book.  It sprung forth as a monster feature, and was not too popular with readers.  Headed for cancellation, Alan Moore was brought in to breathe new life into the book, and he did so full bore!  Alan Moore retconned the origin story of Swamp Thing.  Originally, Swamp Thing was a man who, after being doused with experimental fertilizer of some sort, found his way to a nearby swamp where he was turned into the Swamp Thing.  Alan Moore changed that up.  Instead of a man becoming Swamp Thing, an earth elemental spirit took on the human shape of the scientist.  Swamp Thing is tasked with protecting the Green, which is in fact, all plant life on the planet.  The horror comes in the many ways humans treat nature and the revenge that Swamp Thing enacts in the name of The Green.

Alan Moore never shied away from showing the ugly, evil sides of human nature in his work.  With Swamp Thing he was able to explore ideas and topics that in other mainstream or superhero comics of the time would have been taboo.  Alan Moore shows us true evil, true monsters who look human and nice and normal, but who are ugly and sick inside, as opposed to the Swamp Thing, who is a monstrosity that has a hero’s soul inside.  Seeing as how good “spirits” like Swamp Thing exist in this comic book world, it is evident that a lot of evil would exist for Swamp Thing to fight.

The horrors and monsters that Swamp Thing battles are just one aspect of the comic book.  Just as important is the internal life of Swamp Thing.  Alan Moore’s genius lies in exploring the true self of his characters.  Swamp Thing is conflicted.  He falls in love.  He feels deep sorrow and pain at the way humans treat Mother Nature.  He seeks to understand his place in the cosmos and why he’s tasked with protecting the Green.  The humans and monsters he fights are the opposite, seeking to either destroy nature or to corral it and wield it like a weapon.  I can see why many superhero comic fans did not appreciate this series.  It is too complex and disturbing for someone that just wishes to see didactic good and evil fighting.  What was more surprising to me was how sad, how deeply mournful Swamp Thing is as a book.  Alan Moore’s fears for what the modern world has done to our Mother Nature are evident.

While much of the Swamp Thing saga is grim and monumental, Alan Moore also finds joy and humor in Swamp Thing and his life.  One of the most interesting issues is a one-off that explores what happens when a tiny ship filled with cute alien beings lands in the Swamp.  They have travelled for centuries seeking a new, lush, green home after their home was destroyed.  Told in a light-hearted and humorous manner, this story nevertheless becomes one of deep sadness and pathos as the small aliens discover the damage that humans have done to the Earth, and decide to leave in search of another home, one that will not soon be damaged irreparably by its inhabitants.  Heavy stuff for a “comic book.”

I must mention the artwork of Stephen Bissette and John Totleben.  For a horror comic book, the artwork must not only be appropriately scary, but it should lend a specific visual language to the book.  The naturalistic drawing and minimal inking of the artwork used in these comics speak to the content within.  It is a perfect match.  The visuals of Swamp Thing are some of the best of the era, able to portray not only the physical battles that Swamp Thing engages in, but also the psychic and ethereal battles fought on the Astral Plane.  Comic Books are, when done right, a perfect combination of story, words, and images.  This is one of those successes.

I highly recommend finding and reading the run of Swamp Thing issues that Alan Moore wrote.  If you are already a fan of his, you will get to experience his early work.  If you are not yet a fan of Alan Moore then this is a good place to start as nearly all of the work he has produced since the 80’s contains many of the elements he first explored in Swamp Thing.  From explorations on the metaphysical and mythic nature of existence, to the re-introduction of nearly-forgotten characters from the history of comic books and much more, Swamp Thing is definitely an early Alan Moore triumph.