A Second Trip to Mars from Damien Larkin 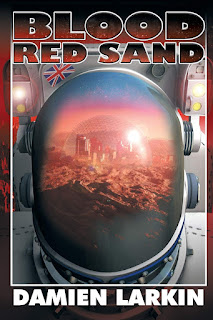 In 2019 I was introduced to a young science fiction writer named Damien Larkin after his publisher sent me a review copy of his debut novel Big Red.  Once I read the book and wrote up a review, I wondered when Mr. Larkin would transport me once again back to Mars to catch up on the doings of the Mars Expeditionary Force.  Upon receiving a shipment from the good people at Dancing Lemur Press I knew that time had come.  Inside was a review copy of Damien Larkin’s second novel Blood Red Sand for me to enjoy.

The world of science fiction is as wide and varied as any other “genre.”  Blood Red Sand like Big Red, is a work of militaristic, alternate-history science-fiction, akin to Heinlein or other well-known sci-fi giants. Every author brings something of themselves to the stories they tell and it is evident while reading Blood Red Sand that Mr. Larkin not only experienced combat, but he understood the true feelings and horrors experienced by soldiers of all types, in all times.  The way he captures this on the page is thrilling and repulsive at the same time.  Mr. Larkin does not ever aggrandize combat or the military for their own sake.  Instead, they are the vehicle for the very large story he is telling.

As with other novels, I do not wish to give away plot points, or anything that may take away from a reader’s enjoyment of Damien Larkin’s books.  I refuse to provide a synopsis.  Good science fiction needs an air of mystery going in, to let the mind be blown as it experiences the story.  What I can say is that this novel follows the events of Big Red at the same time that it precedes them.  Is that confusing?  Welcome to science fiction!

One of my favorite writing devices that Damien Larkin utilizes is the way he separates the various “scenes” and chapters.  As we go back and forth between our protagonists and antagonists we see what they think, how they act, and why they feel they are in the right.  This is something that applies to nearly all wars, the idea that both sides are adamant they fight for the “true cause.”  Our heroes, regular men placed in extraordinary circumstances, understand that all that matters is one’s survival and that of your fellow soldiers.  Too often I have read fiction works that portray the military men and women as mindless, as robots trained to kill, not feeling the effects of what they do and what happens around them.  Much science fiction focuses on the bigger picture, not the individual story.  Damien Larkin knows the truth.  He shows those of us who have fortunately never been in combat what it is really like, including the worries, doubts, fears, and most of all the chaos.  There were times when I would read 10-15 pages in a frenzy!  It is an exhilarating read.

The filmmaker Truffaut supposedly once said, “There is no such thing as an anti-war film.”  He meant that any film about a war, even one vehemently against war, inevitably will aggrandize and glorify combat, soldiers, and their camaraderie, even as it tries to decry war itself.  Some may say this applies to books as well.  I think Damien Larkin has succeeded in telling a militaristic tale without forgetting the trauma and horror caused by wars and battles, especially to the innocent people on the sidelines.  I look forward to more stories about Mars and to whatever else Mr. Larkin puts his mind to write!

(This novel is available for purchase here: AMAZON )