The Anomalies are Where the Real Work of Life Happens 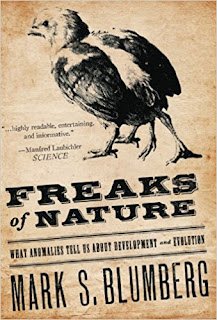 Freaks of Nature: What Anomalies Tell Us About Development and Evolution – Mark S. Blumberg (2009)

As I was browsing the selections in the M.D. Anderson Library at the University of Houston I came across this book.  Sometimes interesting books just fall in your lap.  The title, Freaks of Nature, seems sensationalist, but what is found inside is a deeply researched and well-written account of the wide processes by which nature creates the seemingly infinite variety of life and life-forms on our planet Earth.

The main subject of this book is exceedingly topical in today’s world where people are starting to understand the wide spectrum of human sexuality, human sexual development, and the evolution of sexual roles in the many species that display them.  Too often our human group-mind seeks to designate everything and anything into tidy examples of dichotomy.  For example, it is very easy to reduce the infinitely complex nature of human experience with chocolate as “some people like chocolate,” and, “some people do not like chocolate.”  Both of these statements, while true, do not speak to the actual reality of chocolate experience among humans.  Some humans adore chocolate, and it is the main object of their snack desires.  Others are allergic to cocoa, and eating it is a health risk.  Other people appreciate chocolate smells but cannot stand the taste.  Still others experience euphoria and altered states of consciousness upon ingesting chocolate.  Even with something as seemingly simple as a foodstuff, a dichotomous reduction fails.  This idea is what the author applies to the understanding of those life-forms that humans deem “freakish” or monstrous” or “misbegotten.”

One of the early chapters discusses birth defects which are similar throughout the animal kingdom.  Twinning, or congenital malformations, can be found in almost all plants and animals we research.  Sometimes one can crack a hen egg and two separate yolks come out.  Sometimes snakes are born with two heads, just like the humans that were displayed in freak shows and sideshows in our recent past.  These similarities, and the similarities between all vertebrate embryos that were discovered through the development of microscopy, helped us humans accept that there is a universal “code” for development.  This code is called DNA.  For a long time, humans seemed to accept that DNA was a hard-wired instruction manual, and that any deformation or defect was caused by a mutation in the genetic material.  This seemed to make sense in a world where everything was dictated by a supernatural and perfect entity.

However, this viewpoint fails to account for the equally important, and sometimes more important, aspects of development brought forth by environment.  In humans, for example, a normally developing baby can start to develop malformations or defects based on the mother’s exposure to a certain chemical.   These issues do not arise from DNA.  They come from outside the developing organism.  In many species of reptiles, such as crocodiles, the temperature of the soil in which the eggs are laid determines the sex of the animals.  In some, high temps mean male children, while in others high temps mean female children.  In yet other reptiles, extreme temps either low or high result in one sex of offspring, and median temps result in the other.  These factors are so varied and so complex that it has been very difficult to identify and determine exactly what shapes a life-form’s development.  The more we look the more non-dualistic nature seems to be.

Life is about change.  Life is endlessly adaptable.  If not the single organism then the entire species will adjust.  Understanding the near-infinite variety of forms and functions allowed in Nature helps us to better understand a current hot-button topic.  That is the idea of intersexuality.  Humans assign sex roles to their children as soon as they are born, sometimes to highly detrimental effect.  We assume males are males and females are female but this is not ever that clear.  There are humans born with XX, or “female” designating chromosomes, but who show outward male sexual characteristics.  There are humans born with XY chromosomes, but who lack certain enzymes that allow their body to process the testosterone it creates, leading to female physical traits.  There are humans born every day that have two separate gonads, or two separate sexual organs.  Humans are not alone in this.  There are examples from all of the animal kingdom of such births, creatures that do not fit our dichotomous male/female model.  In many children, reconstructive surgery is imposed on them by worried doctors and parents, parents who think, if I shape my child’s genitals to be male, he will then identify as male, and all will be great.  Studies show this is fraught with trauma, especially as the individuals in question have had no say in how they wish to live.

The way in which we treat each other depends a lot on the definitions we assign to the world around us.  Intersex organisms weird people out sometimes.  We have been taught that there is but one way to be, either male, or female, and that some sort of god decreed that this is how everything should be.  Everything else is either a mistake, or an abomination, or a punishment from this supposedly benevolent deity.  Humans still abandon or murder babies they see as malformed or cursed.  We still force our ideas of what life is supposed to be like on others.  I wish more people would read books like this, the better for them to understand that Life is a process, an ever-developing, and ever-expanding process, and that there is no one way to be.  Those we call freaks or monsters are just as developed and evolved as we are.  They deserve the same respect and dignity we shower upon the life we deem normal, and in many ways, may be pointing to what our future could be.

(This book can be purchased here:  FREAKS OF NATURE  )
Posted by Rob Instigator