The Butthole Surfers Regret Not Regretting Anything 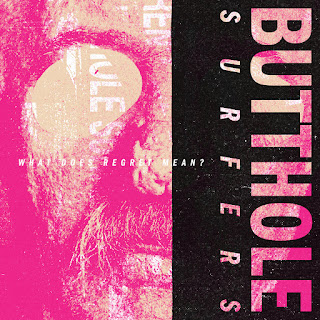 As a teenager, bored with hard rock and heavy metal for the most part, I sought out music that scared and excited and confused me because I was just so sick of the crap that MTV, radio, and the “norms” thought was good music.  I wanted the transgressive, the avant-garde, music that is so fresh and new and different that most people would hate it for years, until their feeble ears and brains could slowly catch up.  The first bands that sent me down this awesome spiral of skronk and freak-out were Jane’s Addiction and Sonic Youth.  Both were loud, rocking, and aggressive in completely different ways, and both sounded nothing like the formulaic heavy metal and thrash that had been rattling in my ears.  One band that was always mentioned alongside these two faves of mine was the Butthole Surfers.

My friends and I would drive into town in one of our parent’s cars on a Saturday and hit up the cool record stores.  At Sound Exchange, I would peruse the used cassette section, and every time I picked up one of the Butthole Surfers' albums, I would get a queasy feeling based purely on the visual aesthetic of their releases.  It was just SO WEIRD.  They did not list the band member’s names or song titles all that often, but what I did see is still burned into my mind.  I was too young and naïve to understand that an artist’s image is mostly a fabrication.  I was also too young and naïve to understand that the Butthole Surfer’s image was not in the least a fabrication, and that they were fully the weirdest single group of musicians I would ever have the fortune to listen to and love.

Sometime in my first year of study at the University of Houston, my friend Barnaby Struve kept playing Butthole Surfers vinyl for me.  At one point he made me a 120 minute compilation cassette (remember when you could record 60 minutes of music on each side of a Memorex cassette?) of what he described as “the choice cuts.”  It was a revelation.  Even without any of the art, liner notes, or bizarre imagery, the music itself blew my teeny little mind.  I grew to LOVE these songs, to understand and relate to the insanity within, to see the undeniable beauty contained within, and to appreciate the balls it took for this band to stay true to their demented idea of themselves.  I played that cassette so many times.  I dubbed it for at least 5 different friends.  At parties, I would commandeer the stereo and play this Butthole Surfers compilation repeatedly (some people were not too happy about this).  The music was like instant intoxication, if that intoxication actually exposed the ugliest sides of ourselves.

That was in 1991-1994.  The Butthole Surfers had been taking cares biz-nass since 1981.  Never during that time period would anyone even remotely aware of the Butthole Surfers consider that in 2019 a lavish, expensive, and downright beautiful coffee table art book would be released based mostly on the imagery the Butthole Surfers used in the promotional material, records, and merchandise.  Before the internet, the main way you found out about bands was from word-of-mouth, or lucking into seeing them as they opened up for someone you liked, or seeing a cool t-shirt on someone and striking up a conversation.  The Butthole Surfers were a band whose fandom grew in this manner, because everyone that witnessed a live show could not stop talking about it.  There was no other band like them.  There will never be another band like them.

This book is like a deep time-slip dive into our collective Butthole Surfer past.  I cannot emphasize how often my shit-eating grin would appear on my face as I read this book.  Whether this was because of the many amazing images and fliers and promo materials, all presented like a DIY ‘zine, or because the commentary and remembrances sprinkled throughout brought me back to those times.  I was too young to see the Buttholes perform their insanity at small clubs in Texas, but I did get to see them perform many times, including at Lollapalooza where singer Gibby Haynes used a shotgun loaded with blanks to shoot at the crowd.  That shit was scary.  This book is scary.  The Butthole Surfers are scary.  They have to be.  I would not have it any other way.

Aaron Tanner’s goal with this book was not to write a history, even though it is constructed sequentially.  He sought to share with the world just how individual and amazing the visual component of the Butthole Surfers’ myth was, from promo materials, to zines, to album notes, and personal photographs.  He has created something that I will treasure all the days of my life.  To top it all off, a flexi-disc is included with the book, containing a track that was to be used as a B-Side during the Independent Worm Saloon era.  Such cool stuff.  For a die-hard fanatic like myself, it is pure joy.

(BTW, I have played my wife 5 different Butthole Surfers songs over the past 8 or so years.  Each and every time she hears a new one, she tells me that it is "the single worst song she has ever heard."  This makes me laugh with glee and appreciation.)

(The Regular edition is sold out.  The Deluxe Edition is still available here: Melodic Virtue )