Francis Crick lays out the pathway to explore our Consciousness 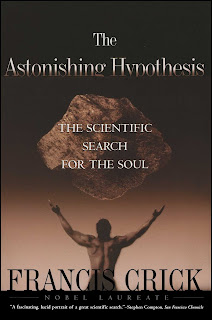 The Astonishing Hypothesis: The Scientific Search for the Soul – Francis Crick (1994)

The title of his book is a bit misleading.  Francis Crick, one of the group of scientists responsible for our current knowledge about DNA, its structure, and how it works in living plants and animals, is not discussing what theology and religion call a “soul.”  What he seeks is the means and methods by which humans can empirically study consciousness/awareness itself.

Consciousness is a very tricky subject for everyone involved.  Research scientists rarely explore consciousness itself, instead seeking to understand the physical workings of the brain.  Philosophers explore consciousness and awareness but do not use the knowledge derived from the decades of work done on physical brain structure, and the function of the many neurons in our brain.  This creates a vast gap of knowledge.  We know mostly how individual neurons work, and roughly how many areas of the brain correspond to different functions and cognitive abilities.  What we do not know includes what parts of the brain control or experience consciousness, exactly how we create and store memories, both short term and long term, and how we manage to process the myriad sensory inputs we constantly receive.  This book is Francis Crick’s attempt to survey the current state of things (as of 1994) while shining a light on many areas of research that could lead to fruitful answers, focusing mainly on visual Neuroscience.

The “Amazing Hypothesis” in question is the proposition that what we call consciousness, and some call a “soul,” is a product of the way the brain’s neurons function, specifically the complex human brain, and that through empirical experimental methods we should be able to discover and understand the actual structure that brings about consciousness.  As the brain and all of human experience constitutes an exceedingly complex and varied system, it is best to try to study one specific aspect, hoping it sheds some light on the bigger picture.  Mr. Crick decides, based on the then-current state of scholarship, to focus on the specific ways we see, and how our brains process what we see.

While many of the sciences have spent the past 100 years discovering deep truths about the world around us, this has not happened in the study of the human brain.  There are several reasons for this.  Firstly, it is considered unethical to conduct brain experiments on humans unless they have already suffered some sort of trauma/damage to their brain and willfully allow a scientist to experiment.  Secondly, the study of consciousness has been relegated to philosophers and theologians, most of whom know very little about the actual structure and function of the brain and its constituent parts.  This means that their explorations are more guesswork than deduction.  Thirdly, while we can study the brains of cats, rats, monkeys, or other lab animals, this does not necessarily translate to the human brain.  While a human being can be certain that they themselves are conscious, and be fairly certain that other humans around us are conscious, it is a much bigger jump to assume that other primates and animals share the same consciousness that we do.  A monkey is taught/trained to do certain tasks while their brain is monitored, but they cannot provide actual feedback like a human could.  Many scientists end up focusing solely on structure and the electrochemical reactions in the brain and not on what they mean for the study of consciousness.

Francis Crick decides that in order to pick a specific area to research that is likely to provide the best answers to the consciousness question it is best to focus on sight.  How do we see?  How do our eyes, nerves, and brain work together to understand what is being seen?  This seems like a promising point of departure in the search for our consciousness.  Crick spends the first part of this book detailing the then-current state of scientific knowledge, exploring everything from studies on the eye’s retina, to the structure of neurons, to the many ways they communicate both within and without themselves.  One item that surprised me was the knowledge that many of the neurons that help the retina function act as a processing center, before the information reaches the brain itself.  In fact, the nerves that feed what your eyes see to the brain are part of the brain itself, not just a connection. It is as if neurons from the developing embryo brain reach out to connect to the developing eyes. Quite cool stuff.  What is also evident in the background info Mr. Crick provides is the vast amount we do not know.  We have very rough guesses as to what regions of the brain handle specific tasks.  We still do not know how exactly the brain regulates the massive sensory input it receives every moment of every day.  We have no idea how or where memories are stored.  This vast ignorance is actually a great thing for neuroscientists, as it helps guide them to new experiments and areas of research.

The latter part of the book details many possible areas and studies that could be done to try and find the answers Mr. Crick looks for. Over a century ago it was common for educated people to believe that a Life Force flowed through living beings, separating them from the inanimate objects around them.  No other way could be imagined for the growth of the young, the way offspring look like their parents, etc.  Once we understood the cardiovascular system, the pulmonary system, and finally the structure, function, and purpose of DNA, the idea of a Life Force dissipated and was dropped by humanity as a whole.  Francis Crick thinks that is where we are at today in regards to the human “soul.”  Many blindly accept that it exists, especially in the forms that theologians and philosophers feel it does, but this could change were we to understand the workings of our brain.  We may find that consciousness is a direct result of life itself.  We may find that what we call consciousness is a trait shared by any and every creature with a neuronal brain, or we may find that only the human brain possesses the required structure to function as an individual consciousness.  The field is wide open and I cannot wait to read more.  It is nearly 30 years later and we still do not have answers to most of Francis Crick’s questions.