If I Could Have the Nervous System of an Octopus, Without Its Many Arms... 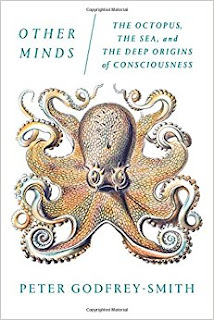 Other Minds: The Octopus, The Sea, and the Deep Origins of Consciousness – Peter Godfrey-Smith (2006)

Much of my reading, and many of the books reviewed here at the Intellectual Journey, deal in some way with the idea of consciousness.  Some books explore the relationship between the outside world and the “inner mind.”  Others seek to understand the raw organic material that our bodies are composed of and why it creates the entity we call Mind.  Still others describe the progress of our collective knowledge and myth-building, especially as they relate to human social constructs like religion and government.  It appears that the human capacity for consciousness and thought inspires many writers, scientists, and philosophers.  One of the great things about this book is that it takes a step back away from our human field of experience, to explore one of the few other animals on Earth that also has a highly complex neurological system, this being the octopus, and their cousins, the squid and the cuttlefish.

Peter Godfrey-Smith began his journey to writing this book because he witnessed something that many other people who work with or near these amazing animals have noted.  They appear to be observing you, just as much as you are observing them!  They interact with humans, both in the wild and in captivity, like creatures that have some sort of self-consciousness, or sentience.  In the wild, an octopus will often reach out a single tentacle arm towards a human diver, to touch them and taste them (octopuses can sense chemicals with their skin, essentially being able to “smell” and “taste” anything they encounter).  A cuttlefish will often produce the most dramatic displays of color and light through its amazing skin, in a seeming effort to interact.   In captivity, there are countless stories of octopuses that can recognize individual humans in a group, even when they are all dressed exactly the same.  Other octopuses have learned to squirt water with their siphons at people standing outside their tanks.  A few have even learned that a squirt of water is handy in turning off the aquarium lights above their tanks.  They are masters of camouflage, mimicry, and contortion.  Because the largest “solid” part of an octopus is its eyes, it can squeeze through any hole that their eye will fit through, allowing a sixty pound octopus to escape captivity through a two inch hole.  Amazing!

One of the coolest parts of this book details how the development of an amazing nervous system occurred separately in cephalopods than in primates.  The earliest common ancestor between cephalopods and humans lived very likely over 200 million years ago, back when all animal life was in the oceans.  From this animal a branching occurred, in one direction leading to the bilateral animals, including the ones with spines and bilateral symmetry and in the other branch, a path leading to the mollusks and eventually to the cephalopods studied in this book.  For us humans, much of our nervous system is encased in a hard shell (the skull) and this is the apparent seat of our conscious and unconscious thought.  Nervous signals are received from throughout the body and processed in the brain.  Cephalopods do not work in this manner.

An octopus has nearly as many neurons as a human, but they are not localized in one certain area.  The octopus’ neural network is spread throughout their entire body, allowing them to have massive control over their shape, color, and skin texture.  Each arm of an octopus has its own functional node of neurons, essentially controlling the arm separately from the main “brain.”  These animals appear to have consciousness of a high order, but they do not have the same equipment as us humans.  In fact, in cuttlefish for instance, each individual neuron reaches from the skin to the brain node, without any other intervening connections.  Humans and most other animals do not work in this way.  We have sequences of neurons, each connected in linear form, to allow signals to travel from our finger to our brain and back.  This, while seemingly super-fast, actually slows down the signals considerably, as not only do electrical signals travel through the neuron, but chemical signals must be released and received in the connections between the neurons.  The octopus does not have this problem, and it’s sensory world must operate on a level that to a human would be unspeakably fast.

There is much discussion about the history of the study of sentience and consciousness, which is awesome, and provides a great background into the current state of thought on “thought” itself.  It helps the reader to understand the real differences between human consciousness and cephalopod consciousness, which is critical.  Humans have the ability to process in semantic layers, with some thoughts being submerged, others being lifted, and yet others trying to understand the thoughts being thought!  This creates a massively rich internal life in humans, and in other smart animals that have been studied, such as birds, dogs, dolphins, etc.  The octopus however lacks this inner life it seems.  What it does have is a nearly infinite ability to sense the world around it, to respond to it, and to explore it.  Our brains suit us, as we have a relatively long lifespan and a lot of information to learn as humans.  The octopus and most cephalopods live very short, brutal lives, sometimes not making it past a second year of life.  It did and does not need to store long term memory, to develop individual consciousness like humans.  It instead needs as much input from the world around it as it can get, in order to stay alive and procreate.

I have always loved octopuses and cuttlefish.  I am so glad I found this cool book.  Peter Godfrey-Smith has given me quite a lot to think about as I continue on my Intellectual Journey.  I will for certain be reading more about the latest research on cephalopod intelligence.  As the writer states, meeting an octopus in its habitat is the closest we may get to meet a truly “alien” intelligence.