The modern Ideas about consciousness began in ancient Egypt 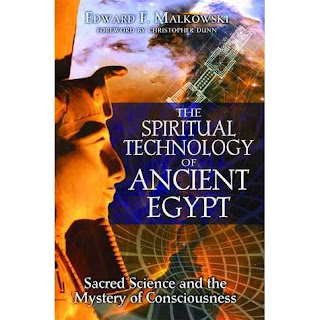 The Spiritual Technology of Ancient Egypt: Sacred Science and the Mystery of Consciousness – Edward F. Malkowski (2007)

The human race has a deep fascination with the relatively ancient Egyptian culture, especially the amazing technological and architectural wonders left behind by the Old and New Kingdoms of several thousand years ago.  To some researchers however, the blind obsession with the physical leftovers of the Egyptian culture blinds people into ignoring the other aspects of that culture that allowed it to survive and thrive for thousands of years.  The philosophical, theological, and cosmological ideas of the Egyptians, and their effect on the history of human thought, science, and religious belief, are what are explored by Mr. Malkowski in this cool book.

It seems odd that, for all the praise lavished on the Egyptians amazing technological achievements in architecture, writing, and fine arts, not too many people explore the deep roots that our modern religious thought has in the ideas of Egypt.  People forget that Moses was raised in the Pharaoh’s house, taught as any noble Egyptian would be, to read and write, and do mathematics, and analyze theology and philosophy.  The wisdom he learned there was what he later applied while leading the Hebrews to their “promised land.”  The ideas he shared with them, from Mosaic law to the Ten Commandments, all have precedent in the Egyptian philosophy and theology.  These ideas are what scholars refer to as the “Mysteries.”

These Egyptian “mysteries” were in fact esoteric knowledge about the biggest questions humans have.  Why are we here?  What created existence? How do we know we are real? What is time?  What is our purpose?  These and many other questions are explored by Mr. Malkowski from the vantage point of the Egyptians.   These ideas are big, shocking to those ruled by religious dogma, and because of this they have been kept “hidden,” taught only to those who actively seek out the information.  For example, there is no moment of creation, after which the world just existed.  We are all a part of creation at every point in our lives, for once creation begins, it does not end.  The entire Universe is in a constant state of self-creation, and consciousness is an integral part of the Universe understanding itself.  Because of this, we are all divine, due to our local consciousness being just a small sliver of the overall Universal consciousness, which many label as god.

The idea of “sin” is taken very literally by close-minded believers.  They want a set of rules.  This is good, and this is bad. Do only the good, and ask for forgiveness for the bad.  That is not the truth of sin.  That is how organized groups use the concept of sin to control the population.  The Egyptians, the Greeks after them, the early Christians and Gnostics, and many other groups since have understood sin to be a different thing.  Since humans are a combination of the material (physical body and brain) and the divine (non-local consciousness), a true life is led by those who see and accept both aspects of themselves.  This duality is a critical thing.  SIN, as it was viewed by the Egyptians and the mystics that followed, is the state where a human has become solely obsessed and focused on his physical self, whether that is as a denial of their own consciousness, or in partaking of what people call the Seven Deadly Sins, all of which deal with the obsession of the material self to the exclusion of the divine self.  This is what Jesus talked about when he said that everyone is with god if they so choose, and that being away from the divine is the true sin.
Some groups of people, (the Zoroastrian faith for one) took this Egyptian mystery influence to the extreme and saw the material world as purely base and un-divine.  Instead of striking a balance between the physical and the divine, they sought to purge anything physical and focus solely on the divine.  Other religions, (organized Christianity for example) decided to do away with the “mysteries” and instead focus on dogma as societal control.  They ignored the teachings and words of Jesus, reading them literally (exoterically) instead of as allegory (esoterically).  Because of this, for the last thousand years, much of the Egyptian wisdom has been ignored, and their philosophy and theology treated as just an odd curiosity, a mish-mash of beliefs and gods and conflicting ideas.  This is a real delusion, causing us to think of the greatest civilization of humanity’s past as amazing in technology but ridiculous and laughable in their theology.  What an error we make.  When deep ideas are expressed, they must be expressed in story or allegory in order to make an actual impact on a human.  People do not like being told flat out what they should or should not do or believe.  It is better to share such information in a form that will allow for the receiver to explore the ideas.  This is why, when discussing the biggest issues, Jesus in the Bible spoke in pure allegory.  The problem with allegory is that, once the culture moves on, those symbols no longer mean what they used to.  We modern humans have no basis to understand an Egyptian allegory, much like an ancient Egyptian would not be able to comprehend an allegory containing modern symbols, such as the “mushroom cloud,” “Superman,” “Coca Cola,” etc.

There is so much more in this book to explore, like the idea that the three great pyramids at Giza are far older than the Egyptian civilization, or that the language of the Egyptians is a hold-over from that previous civilization.  The world is an ever changing place and only our ego keeps us from accepting that the people of the past were not grunting savages, but instead exactly the same as you or I, seeking answers to the difficult questions, and working to help sustain their civilization.

(This book is available for purchase here:  The Spiritual Technology of Ancient Egypt  )
Posted by Rob Instigator