The Ancient Sumerians May Have Left Us Our True Legacy 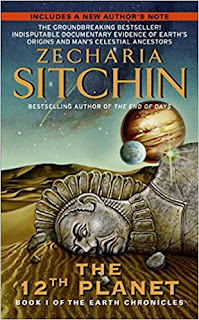 I have always enjoyed my forays into what mainstream writers refer to as “the Fringe,” or, if they are being blunt, “the Lunatic Fringe.”  Ideas and subjects once considered ridiculous or plain deluded, have been shown throughout history to be valid, sometimes because it takes time for society to catch up to the ideas being described, and sometimes because what may come intuitively to a human being as a Truth cannot be verified until years or centuries later.

An example of the former is Copernicus, whose writings were deemed heretical, solely because the mass consciousness at the time was living under a reality tunnel that did not allow for anything other than the will of a god to determine what happens to our world.  In a world rife with illiteracy, those who were literate and powerful (the church) controlled what the illiterates thought and believed.  An example of the latter would be Alfred Wegener, a meteorologist who, in the early 20th century, wrote up his ideas that the continental plates were in constant motion, and that the landmasses were all connected at one time in the distant past.  His ideas, while consistent with the observational data, were dismissed out of hand by geologists and earth scientists, who still believed the Earth was an unchanging rock, only altered by erosion and wind.  Once we humans began to create tools to explore the possibilities and history of plate tectonics, it was discovered that all the landmasses had indeed been connected in the past, and not just once, but at least 5 different times that can be verified through rock strata.  There are countless such examples.

I am not stating that what Mr. Sitchin describes in his book is factual, or even possible, but who am I to know?  I am just a well-read, educated reader, but in no way am I an expert on ancient cultures, especially the Sumerian kingdom, and what came before it.  What I do have experience with is reading about religion and myth and exploring how truth can be coded into legend, and how legends can betray truth when misread.  I say that as a caveat.  Mr. Sitchin studied the Hebrew Bible in the original Hebrew, and has studied the Greek early translations.  I am not sure if he has taught himself to read cuneiform and earlier writings, or if he is using other’s work, but I have to take all of his translations with a grain of salt.

That being said, what is described in this book is, to my mind, plausible, and a bit frightening if even slightly true.  There are some very serious and unanswered questions regarding the evolution of Homo sapiens, from the previous hominid species (Homo erectus, Homo neanderthalis, etc.) that immediately preceded our species.  The anthropological record seems to show that hominids evolved in Africa, and around 100,000 years or so ago (maybe longer), the ancestors of our species migrated out of Africa, settling in the Tigris-Euphrates valley and spreading through the world.  The earliest civilization that we can find any record of, whether archaeologically, or in ancient myths and writings, seemingly began out of nowhere around 8-10 thousand years ago, complete with agriculture, livestock, and societal structures we would recognize already in place.  This also coincided with the end of the last Ice Age on record.

Sitchin claims that the legends of Sumer and their tales of their gods are actually factual accounts retold as legendary history.  The 12th planet of the title, is supposed to be a planet on an inclined elliptical orbit of the Sun, taking it out way past Pluto, and then back into the Solar System, between Mars and Jupiter, every 6,400 or so years.  This planet was the home of beings that sought out the mineral riches of Earth for their benefit, and who settled down on our planet, building several cities in the Euphrates to serve as their “space port” in a way, for every one of their years afforded them a chance to return to Earth or return from Earth back home.

In this tale, the beings asked their lesser brethren to work on Earth, gathering the minerals (gold, lithium, plutonium) that they needed from the southern areas of Africa.  According to Sumerian myth, these workers got fed up and asked their leaders to create a race of beings to serve as their work slaves.  This was to be us, the humans.  Much is discussed about how the biblical story of creation seems to describe exactly such events, especially when the god of genesis describes how he is one of many gods, and how they created humans in the gods’ image.  Sitchin goes into a lot of detail regarding this, and it makes for very interesting reading.  Humans served the gods.  The gods watched over the humans.

In recent times, WWII air forces would set up temporary bases in secluded Pacific Ocean islands, bringing with them everything modern, and, once the usefulness of the island was gone, the Air Forces would leave.  The people who lived there, the native islanders who had very little, if any, knowledge of the world outside their islands, started very quickly to believe they were gods, who, if placated or inspired, would return, providing the islanders with the modern goods and luxuries they saw as nearly magical.  They would build effigies of WWII propeller fighter planes, and create landing strips, hoping to inspire the visitors to return again and grace them with their godly presence.  They stopped their native religious practices in the attempt to feed this new belief.  That is our human nature.  It is very plausible to me that if beings from another world ever came to our planet and interacted with us that we would see them as gods and build our entire culture around them.

There are a lot more examples and cool stories in this book.  While it may all be a writer-created hope, there is always the possibility that what Sitchin is describing is the truth of our existence.  Ancient man had deities that were eternal, always with us, always a part of the world around us.  In fact, the world itself was full of life spirit.  Modern man, however, created civilization, rigid religion, and the idea that the god/gods came once in our past, and will return again in the future.  This makes no sense if it was just a truth gathered by our experience in the world round us.  This makes more sense if we are collectively remembering a past in which humans were the subservient slaves of what seemed to us to be god-like beings.
This book is from 1976, and helped foster the Ancient Aliens hypothesis that I so deeply loathe.  (This states that the great works of humanity’s past were too hard for lowly ancient man, and must have been created by aliens, or with the help of aliens, etc.  This insults the brain of ancient man which was exactly like ours today.  If we can do something, they could have done it too.  The only difference is in our storehouse of aggregated knowledge that we can all build upon.)  What Sitchin proposes is not that aliens came down and helped humans, but that an alien race came down to Earth, genetically altered Homo erectus, and created what we call Homo sapiens.  This is why our upward mobility and societal structures have exponentially grown in the past 6,000 years, where before our ancestors were pleased enough to just chill in family groups, and enjoy their lives.  It is a crazy idea, but there have been far crazier ideas that have turned out to be correct.  Many of the criticisms I read about this book and Sitchin's work pertain to very specific instances of sections that critics state are mistranslated from the Sumerian language.  They outright dismiss any of the other claims in this book, without properly addressing them.  That is lazy criticism.  The jury is still out!

(This book can be downloaded and read as a PDF here: The 12th Planet - Sitchin )