Haruki Murakami and Seiji Ozawa hang out, listen to records, and talk about music. 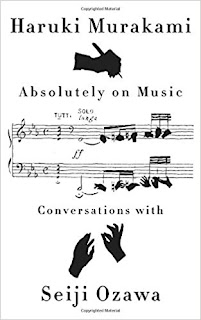 “Like love, there can never be too much ‘good music.’ “ - Haruki Murakami

The Japanese author Haruki Murakami has been one of my favorites ever since I first read A Wild Sheep Chase in my sophomore year of University (oh so very long ago...around 1992-1993).  I owe my love of Murakami to my man Elliott French, who loaned me his copy of that book.  I have also been aware of Maestro Seiji Ozawa’s work, as I spent 7 years playing cello in the school Symphony Orchestra.  Coupled with my father’s enjoyment of classical music at home, this left me with a life-long love of classical symphonic and chamber music.  When I read that Haruki Murakami’s newest book was to focus on conversations between these two giants, and their shared love of music, I grew restless to read it.  Thank Mario for the University of Houston’s M.D. Anderson Library and the bad-ass librarians there who keep the shelves full of fresh new books!

Previously on this Intellectual Journey, I had the chance to read and write about Haruki Murakami’s first non-fiction book, the moving and shocking Underground: The Tokyo Gas Attack and the Japanese Psyche.  Where that book delved into a tragedy that shook a nation to its core, and the after-effects of it all, this book is a joyous celebration in many respects.  Murakami has been a life-long fan of music, with a deep knowledge of Jazz and Classical music.  Ozawa has been working as a conductor since the 1960’s, where he was Leonard Bernstein’s principal assistant.  He was barely 30 years old, knew very little English, and eventually studied and worked under the tutelage of some of the greatest conductors of the 20th century.  Both of these men have very strong opinions and ideas about music, but since one is a music creator and the other is a music aficionado, there is no rancor in any of their conversations, only mutual admiration and the joined love of good music.

The interviews recorded here were conducted over the course of several years, and include the time period when Maestro Seiji Ozawa suffered from a debilitating condition which required surgery and left him unable to conduct what was usually a quite frenzied schedule.  Through the course of these meetings, Murakami would pull out music from his vast collection of records and play them for the Maestro.  These included classic performances by Glenn Gould, and various world-renowned Symphony Orchestras.  Some of these were recordings of Maestro Ozawa’s performances, and others were from various contemporaries of his.  The insights that both men bring to the various recordings is just wonderful for a music nerd like me.  It is the next best thing to sitting in a room listening to music with them.  What a cream-dream that would be!

I learned quite a lot about music, about the art of conducting, about the art of teaching young students how to make good music together, and about the relationship between the conductor, the score, and the musicians that make that score come to life.   I also learned a lot about Haruki Murakami himself, and the deep musical knowledge that he has acquired over his lifetime.  Their discussions regarding the differences between a professional writer and a professional conductor make for enlightening reading.  As a writer, Murakami answers to no one, sets his own time-table, works completely alone, and keeps a very rigid schedule.  He awakens around 4 AM, writes for about 5 hours, then proceeds to go eat lunch and get on with the rest of his responsibilities.  Maestro Ozawa likewise gets up around 4 AM, but he states that he gets quite a hunger around 3 hours later, which causes him to interrupt his work.  He then spends the rest of the day in the myriad other duties of a professional conductor.  The quiet morning time is for his most difficult work, that of reading scores and understanding what the composer intended.  Murakami does not travel much due to his work, but Ozawa is all over the world, from guest conductor stints in Vienna, Berlin, Boston, etc., to his several once-a-year Orchestras that gather up players from around the world.  He has to be an organizer, a teacher, a musical genius, and above all, a leader of people.

While both men live in quite different worlds, their relationship only got stronger as the interviews took place.  One of the coolest things in the book is a short afterword by Seiji Ozawa where he discusses how him and Haruki met, how he grew to appreciate the talks with Haruki more and more, and how much he actually learned and remembered through the conversations.  Books like this give a great insight into the minds of genius.  I highly recommend it to anyone who loves classical music, and any fan of Haruki Murakami.  I learned a great deal.

(On his website, Haruki Murakami lists a selection of music that he and Seiji Ozawa listened to during the course of this book’s writing, and provides links to listen to these recordings.  AWESOME.  Here is the link: http://www.harukimurakami.com/resource_category/playlist/absolutely-on-music )

(This book can be purchased here:  ABSOLUTELY ON MUSIC  )
Posted by Rob Instigator