Over 100 years ago, Dr. Otto Rank explored the commonalities found in the world's Hero myths 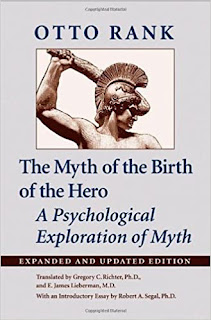 The Myth of the Birth of the Hero: A Psychological Interpretation of Mythology – Dr. Otto Rank (1914)

When looking at the list of books I have read and reviewed here on the Intellectual Journey, I find that many of them deal with the topics of Myth and the influence of these myths on human culture through the ages.  This is a topic that has always fascinated me, but which requires extensive background reading.  Comparative Religion studies is a relatively new area of research, having only truly begun in the last 150 years or so.  Before then, the idea of studying religions and myths to see the similarities and common sources for both was heretical, and all people who sought to study this field were dissuaded from it by the church on penalty of blasphemy.  (This makes me wonder how many amazing works of world literature, history and myth sit locked away in the Vatican archives, solely to keep the knowledge from disturbing their very elaborate and lucrative pyramid scheme.)

In 1914, Otto Rank published a monograph where he explored the specific sources and intent of the Hero myth common to all cultures.  Specifically, Dr. Rank focuses on the parts of the Hero myths that detail the Hero’s birth.  From Sargon and Oedipus to Hercules and Jesus, Dr. Rank details their specific birth myths, working from the most ancient antiquity forwards.  In his introduction, Dr. Rank describes how “prominent civilized nations…all began at an early age to glorify their heroes, mythical princes and kings, founders of religions, dynasties, empires or cities…in a number of poetic tales and legends.”  Initially based on actual events, these stories were embellished and invested with fantastic features as they were passed on from generation to generation.  What struck Dr. Rank, and many others who study such things, is the improbable similarities that arose in each of these Hero’s birth stories.  It is these similarities, analyzed with a psychological view in mind, which Otto Rank explores in this monograph.

Dr. Otto Rank details the three separate theories that researchers of his time offered to explain why there are so many similarities in the various civilization’s Hero birth myths.  One was the theory that there exists elementary thoughts, universally sourced from our human brain, which manifest themselves as details of our Hero myths.  A second was that of original community, meaning that one ancient civilization first created the details that have become universal, purely through the influence of the civilizations that arose from the initial one.  The third explanation offered, migration, expands on the second one, stating that an original civilization created the myths, and then when they expanded their territory, their myths were adopted by the people with whom they came into close contact.  Dr. Rank disagrees with these theories.  Using psychology, specifically the work of Dr.’s Freud and Jung, he proposes that the source of these myths lays in the human mind and it’s psychological constructs, specifically those that relate to our own birth and the processes of growth into adulthood.  As we are all humans with human psychology, it makes sense that our myths would seem to be of a similar character with similar details.

It is not possible to go into everything that Dr. Rank discusses, but one detail in particular stands out.  In most of the classic Hero myths, the birth of the hero is followed by the abandonment/exposure of the baby hero in order that it may die, so as not to fulfil prophecy.  Invariably, the hero is placed in a container, which is then put into a river or body of water.  Fortunately, the child is rescued by someone who then raises him or her to adulthood.  Dr. Rank provides ample evidence that these various water stories are actually mythological descriptions of the Hero’s birth.  This is especially evident in the fact that in most of these myths the Hero is born of royalty or a god, and then after being ditched, is raised by simple folk such as shepherds, wet-nurses, slaves, etc.  The second birth helps separate the Hero from his true family and his true societal obligations.  This is necessary as it allows the Hero to seek the Hero’s path, eventually to usurp or replace his original royal parent.

The creation of myths by humanity is an on-going process.  One of the founding heroes of the United States is the first President, George Washington, who as a General led the forces that defeated the British in the New World.  It has been almost 250 years since that time.  Already, a vast catalogue of fabrications exists that seek to portray President Washington in the heroic light that myth does.  The biggest one is the story where Washington cut down a tree, and when confronted about it, told his parents “I cannot tell a lie.”  This small, apocryphal story has gone on to become the basis of most everyone’s idea about George Washington.  It remains to be seen whether his myth tale will continue to grow.   I think Dr. Otto Rank may be correct in stating that the sources of Myth lie in our very own subconscious minds.  The stories that move us as human have not really changed since the dawn of history.  We all love a Hero.  We all love a story about someone who was taken from lofty heights, brought down to the lowliest of lows, and then re-emerges, like the Phoenix, to greater glory that ever before.  It is truly our human nature.