The Hulk, My Childhood Favorite, Returns to Wreck Shop 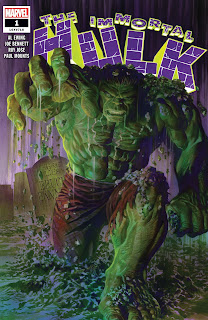 I have always loved reading comic books.  Towards the back pages of the comics there would be a list of every title that had an issue printed that month.  There were so many different ones.  Who could read, much less buy, every single one that Marvel or DC Comics would put out?  I eventually settled in on a few that I followed, buying their issues when I could.  These included the Uncanny X-Men, Thor, Batman, and my favorite, The Incredible Hulk.

Most people, even those who do not read comic books, know of Bruce Banner and his alter-ego The Hulk.  To many, Bruce Banner and the Hulk are like Dr. Jekyll and Mr. Hyde, two sides of a coin.  The Hulk is the unseen horror underneath a seemingly normal, and brilliant nuclear physicist that comes out whenever Bruce is angered.  This does not seem like much to base a very long-running monthly comic book on, much less the countless spin-offs of the Hulk throughout all entertainment media, but I found it fascinating and read the Hulk for years.

The Hulk was different that other superheroes in many ways, not the least of which is in their origin.  Bruce Banner was working on a gamma bomb test when some unsuspecting teenager wandered onto the testing grounds.  He risked his life to run out and save the kid, only to catch the full brunt of the gamma ray blast.  He became irradiated and his body grew to a monstrous size with equal strength.  The Hulk was not Bruce.  He spoke as if he was a child sometimes and Bruce could not control the Hulk “persona.”  Whereas the X-Men were born mutants and outcasts, Batman was orphaned by crime, devoting himself to crimefighting, Thor was a Norse god in charge of protecting Midgard (Earth), and Superman an alien from a destroyed planet protecting his new home, Bruce Banner was a genius damaged and ruined by an act of pure altruism.  It was pitiable, and regrettable, and ended up unleashing one of the most powerful beings in existence to terrorize an unsuspecting world.

As with all reading habits, I moved on to other comics, and other books.  I would keep up with some of the developments in my favorite comics and really enjoyed the Planet Hulk storyline.  Recently I came across a new series of monthly Hulk books called The Immortal Hulk.  Written by Al Ewing, it was a rebirth of the original horror themes found in the Incredible Hulk, pushed to amazing new heights.   It takes off from the character development done on the Hulk in the recent decades and from the start is written, drawn, and paced to keep the heart pumping and the blood rushing.  I was not ready for the intensity of each issue!  I cannot give away any plot points, as I hate that, but I will say that Bruce lives during the day, while the night belongs to the Hulk, and the story of how Bruce comes back from death sets off the entire run.

Each issue builds on the next and the implications for many of the other gamma-powered beings in the Marvel universe come to pass.  It was so cool to catch up on classic Hulk characters that I remembered reading about in my youth.  The artwork is its own type of awesome and reminded me of the best horror comics of the past.  Each page is full of lurid detail.  This is a horror comic, as the Hulk should be, and not a comic book for the little kids.  It may also not be for someone who is coming to the Hulk as a blank slate.  The Immortal Hulk builds upon all previous Hulk lore, which for a comic freak like me, is perfect.  Highly Recommended.