Neil deGrasse Tyson brings the Astrophysics to us 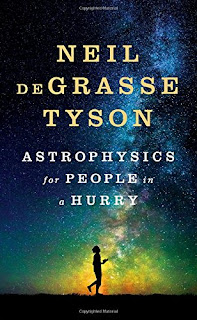 Astrophysics for People In a Hurry – Neil deGrasse Tyson (2017)

The science of Physics, and specifically Astrophysics, has always fascinated me.  I have found that the best way to step outside my own reality tunnel, and to gain what Mr. Tyson labels the “Cosmic Perspective,” is to read and study about the amazing achievements and discoveries that humans from ancient times have made regarding the cosmos we live in.  Our current world-society, with its incessant data-feeds and distractions, impedes people from reflecting on the Universe at large, and the amazingly complex and utterly massive nature of it.  We are all obsessed with our day-to-day grind, our jobs, our families, the news, politics, financial worries, etc.  It is because of this glut of activities and concerns that take up much of the modern human’s life that Neil deGrasse Tyson wrote this great little book.
One of Neil deGrasse Tyson’s greatest traits is his ability to be a science explainer.  Very few scientists have this ability, and because of this, many non-scientists feel that either science is too complex to be understood by them or that scientists are purposefully being obtuse and intricate so as to not share their knowledge with “normal” people.  That is a real shame, because the basics of all the sciences affect us every single day, and without this knowledge it is too easy to be fooled by charlatans and con-artists seeking to impress you with pseudo-science and psychobabble, which all sound very plausible as long as you do not think critically about them.  Some hard-line nerds may put down Mr. Tyson because his focus is on education and dissemination, just as they used to insult Carl Sagan, that last great astronomer-teacher.  Screw them.  The world needs people who can clearly, and patiently, explain the vast knowledge we have accumulated to those who are interested, but do not have the rigorous and expensive education needed to grasp the mathematical underpinnings of science.  I would rather our best and brightest minds become celebrities than the vapid illiterates that society worships
.
In the first chapters Neil deGrasse Tyson explores the development of astrophysics and humanity’s evolving understanding of the heavens above, deliberately highlighting how new discoveries and technologies forced us to change our perspective, from being self-absorbed and obsessed with our human primacy among the cosmos, to finding out that our planet Earth is not the center of the Universe, to discovering out that our Solar System is just one of countless billions in our Milky Way galaxy, to learning that our immense galaxy is just one among billions that populate the Universe, to understanding that we cannot even see much of the Universe due to its expansion.  It is a breathtaking journey that is all the more amazing because it happened in a blink of cosmic time, the teeny tiny sliver of time that Homo Sapiens Sapiens has been studying the heavens.  Compared to the age of our Earth (around 4.5 billion years) humans have not been around very long at all. Compared to the age of our Universe (around 14.5 billion years) we have barely begun to exist!  It blows my mind to think that we humans have only been able to study the heavens as they are for the past several hundred years.
Each chapter is divided into the different ways that astrophysics are able to study the cosmos.  Some deal with the visible light available.  Others talk about the discovery of the remnants of the big bang, mapped through microwaves.  One chapter details the development of radio frequency telescopes, capable of exploring parts of the Universe that are invisible in any other manner.  From gamma detectors to cosmic rays, to the particle/antiparticle pairs that are popping in and out of existence throughout all of “empty” space, every major movement and field of study in astrophysics is presented, and the latest data and ideas about these findings are shared with the reader.  This is all in the service of what Mr. Tyson discusses in the last chapter, which is the beauty and joy of the Cosmic Perspective.  Understanding that we truly are one with the cosmos, that we are made of the same material that the Universe is made of, that our world is one of billions, that all life on Earth, and maybe all life in the Universe, is united by the common threads of our existence, and that it is our ability to understand the Universe itself that sets us apart, all are vital for each and every human being to understand.  The divisions that humans create to aggrandize one group and demean and subjugate another are illusions.  They are outright lies.  We are all humans, all conscious, all alive, all looking for our place in the Universe and our place among our human society.  I hope many people read this book and take the Cosmic Perspective to heart.

(This book is available for purchase here:  AMAZON  )
Posted by Rob Instigator