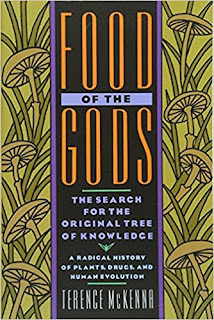 Food of the Gods: The Search for the Original Tree of Knowledge, A Radical History of Plants, Drugs, and Human Evolution – Terence McKenna (1992)

I first read this book when it came out in 1992, around my sophomore year in college.  Much of the insight of this book was lost on me, as I had not yet had time to understand the very far-reaching socio-historical implications of Terence McKenna’s scholarship.  Picking it up again, after 25 years of growth and reading and experience, only served to impress me even more.  This is a highly important book, and should become a foundation for the changes that humanity must make as a whole in order to thrive, and in order to better live in harmony with the life-world that we take for granted.


One of the most intriguing questions regarding the development of our species is when and how the roaming primates developed a higher level of consciousness from the other primates on Earth.  There are many proposed ideas, most of them based on theology/mythology and not actual grounded empirical knowledge.  Terence McKenna was one of the very first to propose that the naturally occurring hallucinogenic plants and fungi helped expand the minds of the hominids, who would ingest these items in their search for food.  In a sense, he proposes that these hallucinogenic properties created the first “shamans” who then had to figure out a way to explore the rich world that natural plant hallucinogens open up.  He has much evidence for this, and it does help explain the sudden rise of what we call modern humans (Homo Sapiens Sapiens) around 100,000-250,000 years ago, and their/our amazing ability to process information and solve problems.


After discussing the origins of the human exploration of mind-altering substances, Terence McKenna goes into a very depressing but integral analysis of the role that substance addiction and use affected our human culture.  After the matriarchal, communal, tribal stages of life, where the shamans (initially female, as they were the ones gathering plants and mushrooms and testing them as food, and then both female and male) would open up their minds with these natural compounds, to better understand the needs of the tribe or the patient.  After several millennia, humanity began to live in larger aggregations, in locations that were fixed, and the access to the natural hallucinogens waned.  In this time, the fermented juices and grains began to be used for intoxication as wine and beers.  This new substance was then used much as the old hallucinogens were.


Once humans managed to distill alcohol, to get purity and strength, it all went to shit.  The problems we face today of alcoholism, rage, violence, and neglect have been around ever since humans distilled the “spirit” of the wine into a potent and toxic drug.  The next drugs to overtake all of humanity, and to continue helping in the degradation of the tribal units, were caffeine, sugar, and tobacco.  Tea initially carried the caffeine addiction but it was not until the spread of coffee, and of the mass manufacture of refined sugar, that caffeine addiction and abuse became a very real thing, and just as deadly as any other drug out there.  Combine this with tobacco, and you have a large amount of the population living constantly in an “altered consciousness” state.  The high from sugar is just as euphoric and the crash just as brutal, as tobacco or caffeine.  The massive and mind boggling extent of the human slave trade was a direct result of the addiction to sugar and the rum that can be created from it.  The Dutch and the British set up a very neat system.  They would gather up slaves in Africa, sell them in the New World to coffee, sugar, and tobacco plantations, buy vast amounts of rum, sugar, and tobacco, sell it all for a massive profit in the UK and Europe, and then go right back to buying humans and selling them off.  This lasted for HUNDREDS of years.


Once these substances were in use, the state and the merchants combined forces to create vast networks of distribution for these substances.  The British government controlled the tea trade much like drug cartels do so today.  They then decided to get into the opium trade, purposefully flooding China with opium in an effort to make a nation of subservient addicts.  They almost succeeded.  At every step of the way, these drugs were refined and made even more potent and deadly.  Opium was refined to morphine, and thought to be a cure for opium addiction.  Heroin was refined from morphine, and likewise was supposed to combat morphine addiction.  The power of heroin to destabilize and subsume a population is evident when McKenna describes the purposeful distribution by the CIA of an exceedingly pure heroin brought in from Vietnam and surrounding areas.  It was called China White and was released to only the black neighborhoods, creating generations of junkies, unable to stand up for their rights.  Our government and in fact, most governments, use these drug cartels to their own ends.  Most of them are propped up by our support.  Pathetic.
Terence McKenna continues on to describe his plan for the elimination of what he calls “the Dominator Culture” that we all live in today.  Instead of human unity, our culture pushes and prizes division.  Instead of legalizing natural substances capable of helping people deal with addictions, trauma, and which open the mind to possibilities unknown, our Dominator Culture sets hallucinogens as CLASS 1 drugs, meaning they have absolutely no medicinal, social, scientific value, which is a flat out lie.  It is solely a means by which to control those who would study these amazing plants and fungi.  However, they easily allow the deadliest and most addictive of drugs to be widely marketed and sold in every corner.  Alcohol, tobacco, and sugar products are what keep people subservient, diseased, and mentally dull.  It suits their interests.  It does not suit our own individual rights.  This is why there was such a crackdown on the hippies.  Their drug taking did not lead to subservience and a drone-like ability to do meaningless 9-5 jobs.  They had to be broken and humiliated.  We must all remain robots.  That is what they want and they are succeeding.