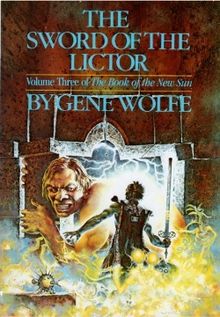 My real-life “Severian”, as opposed to the person narrating the Book of the New Sun, would be so happy.  This guy has been hassling me (kindly) for a while now to finish reading the Book of the New Sun, and I put it off due to my mind being pulled to other topics and books.  However, having picked up and read the 2nd volume of Gene Wolfe’s masterful tetralogy, I found myself unable to pull away from the ancient world of Urth, and the lives of the people that Severian runs into and becomes part of as he sets off toward his destiny.  I had to pick up the 3rd volume, and start in on it as soon as I had finished The Claw of the Conciliator.

Our narrator, Severian, has experienced and grown much since we first met him as an Apprentice to the Guild of Torturers.  He has become a Master Torturer, and his services have been put to use as he travels through Urth.  He has glimpsed through the myths and tales of his world, and begun to see the truths underlying everything he thought he knew.  Urth is a very, very old place, seemingly a far-future Earth, one in which, as Severian finds out, humanity left for the stars and returned from the stars a long time ago.  Much of humanity exists in a feudal system, with a few ruling groups and most of the masses just working hard at staying fed and alive.

Gene Wolfe is such a clever writer.  His narrator claims to have an eidetic memory of sorts, being able to recall any and all events that have occurred in his life, but this is not exactly true.  He doubts his memory at times, due partly to the fact that his mind has “absorbed” the mind of an aristocratic Lady named Thecla, which causes him to recall memories that are not his own.  To add another level to this, Gene Wolfe writes this tale as if it were his translation of an ancient text recounted by Severian himself.  This allows Wolfe to keep the reader on edge, wondering what new revelation is to come next, and whether it will even be recognized as that.  As Severian works to unlock this puzzle he experiences the disjointed state that comes from the knowledge that every new revelation actually leads to more confusion, much like reality.

Most science fiction/fantasy books do not work this way.  As their protagonists progress in their stories the world around them becomes clearer, and their knowledge of it more secure, leading to a great apex where the truths of that fictional world are revealed to the characters and the reader.  I am unaware of where Gene Wolfe is taking this tale, but that makes for a more thrilling ride!  The real world, the world we all live in, is exceedingly complex, and the more you seek the more complexity you find.  It is true, as the wise man is claimed to have said, that the more you learn the more you realize you know nothing.

We are victims of our personal reality tunnels, and seeking any answers will always lead you to more questions.  In this sense, consciousness and reality appear to be fractal systems.  Maybe Gene Wolfe was somehow innately aware of this, even before Chaos Theory and fractal geometry were studied and understood as they are today.  The best writers and artists are the ones that can pull truths from our collective experience and share it with the rest of us, sometimes encapsulating past experiences in novel ways, and at other times seemingly predicting the future state of humanity as they gather from the clues all around us.  Gene Wolfe was a master at both of these, and it is what makes the Book of the New Sun such gripping reading.  One more to go…

(This book can be read here: THE SWORD OF THE LICTOR )