Varlam Shalamov survived the Soviet Gulags, and shares the horror with us readers 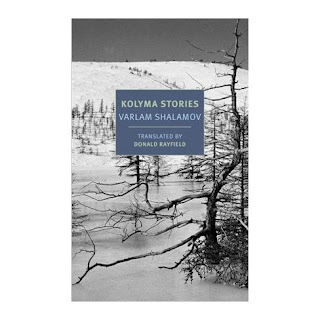 A few years ago I read and reviewed the account of one Ferdinand Ossendowski, titled Beasts, Men, And Gods, which dealt with the author’s experiences escaping into the Russian wilderness to avoid the killing of intellectuals fermented by the Bolshevik Revolution.  That first-hand account led me to look for more books written by survivors of Russian pogroms, prison camps, and Siberian death camps.  I read and reviewed A World Apart, by Gustav Herling, an account of his time spent in a Soviet Gulag and the institutionalized insanity that was the Soviet criminal system.  It was an amazing book.  From that I moved on to Alexander Solzhenitsyn’s One Day In The Life of Ivan Denisovich.  Whereas the previous books are biographical accounts, this work is a work of fiction, but it carries every horror and trauma that Solzhenitsyn suffered when he himself was a prisoner at a Soviet Prison Camp.  In doing some research, I found that the book I just read, the Kolyma Stories, by Varlam Shalamov, had recently been published in an English translation.

Varlam Shalamov was a Gulag prisoner for 15 years, enduring 6 years as slave labor in the gold mines of Kolyma, one of the coldest and most inhospitable corners of Siberia.  After he was released he began writing poetry and prose, including many of the stories contained in this volume.  The harassment from the KGB never stopped, and because of this he was unable to publish his work in the Soviet Union.  At home his work was stashed away in the Russian State Archives of Literature and Arts, likely never to be seen again.  These stories were leaked/smuggled out and printed in Germany and France under a pseudonym, with Shalamov never receiving any payment.  In the late 1970’s, Shalamov disappeared into the state-run homes for the elderly, the conditions of which were “as bad as the worst institutions in the Gulag”. (Donald Rayfield – 2018).  These stories were finally published in the late 1980’s in Russia, and shared with the world Shalamov’s unvarnished and unflinching look back at his Gulag experiences.  While these are all “stories,” pretty much everything that happens in them was something witnessed or experienced by Shalamov himself.

Many of the stories are very short.  Some are two pages long.  What they lack in length they make up for in power.  There is little moralizing in these stories.  The horror is described in plain language, much like Vonnegut did when describing the trauma of the Dresden fire bombings.The plain, insane truth of what humans are forced to do when under totalitarian control is enough to scare the shit out of anyone.  Institutional horror is the worst creation of humanity.  But, when it is backed up by a Byzantine and self-negating government structure?  That is when the human mind shrinks to its smallest, only seeking to survive another day, another hour, another minute.  There is no thought for the life of freedom.  Those that dream of freedom are the first to die.  There is no escape from the forced labor.  Those too sick to work were often treated like lame horses, as wastes of food and resources.  These tales serve as a reminder of how ugly our shared humanity can be, how little we actually care about each other when the powers that be decide to erase our humanity.

In 1961, Shalamov wrote down a list of what he saw and understood in the prison camps.  It is a list of 45 truths.  Here are just a few of them:

·         The extreme fragility of human culture, civilization.  A man becomes a beast in three weeks, given heavy labor, cold, hunger, and beatings.
·         I realized friendship, comradeship, would never arise in really difficult, life-threatening conditions.  Friendship arises in difficult but bearable conditions (in the hospital, but not at the mine’s pit face)
·         I realized Stalin’s “victories” were due to his killing the innocent – an organization a tenth the size would have swept Stalin away in two days.
·         I realized the feeling a man preserves longest is anger.  There is only enough flesh on a hungry man for anger: everything else leaves him indifferent.
·         I realized that one can live on anger.
·         I realized that one can live on indifference.
·         I understood why people do not live on hope – there isn’t any hope.  Nor can they survive by means of free will – what free will is there?  They live by instinct, a feeling of self-preservation, on the same basis as a tree, a stone, an animal.
·         I discovered that the world should be divided not into good and bad people but into cowards and non-cowards.  Ninety-five percent of cowards are capable of the vilest things, lethal things, at the mildest threat.
·         I understood what power is and what a man with a rifle is.

The stories within this volume will live on in my head for the rest of my life.  Soon there will be a second volume published.  I cannot wait to read that.  Thank goodness that people are able to share these experiences, no matter how horrible, through the power of the written word.  The written word is humanity’s greatest invention.  What an amazing writer.

(Four short stories from this book can be read here:  KOLYMA STORIES )
Posted by Rob Instigator