We may all need a New Model for the Universe... 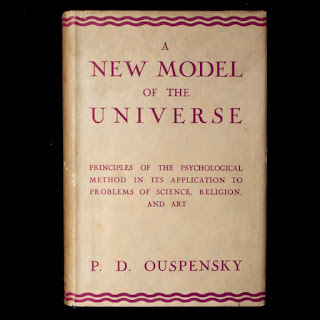 A New Model of the Universe: Principles of the Psychological Method in Its Application to Problems of Science, Religion and Art – P.D. Ouspensky (1929)

This is the second book off of Sun Ra’s Reading List that I have read so far. Both are profound, and complex works attempting to attack and explain vastly different subjects.  Whereas the first book, The Two Babylons, was one man’s exploration of the sources and roots of Roman Catholic ideology and imagery back through time to perhaps the most ancient human civilization we know of, this book is an attempt to explain what countless mystics, theologians, and schools of thought have been unable to.  In this text, P.D. Ouspensky sets out to provide us fellow humans a way into the ideas and knowledge that have been kept “Hidden” or as “Mysteries” throughout human existence.  It is a deep dive indeed.
This is a long and complex work.  It contains various sections written by Ouspensky at various times in his life.  There are parts where the author discusses his own life, and the experiences and events that led him to explore what many ignore, or consider unknowable.  This led him to learn about religions, cults, esoteric groups, secret teachings, and the Mystery Schools, even going so far as traveling worldwide to learn from those they call Masters in remote lands.  Ouspensky is not your typical seeker, as he is very well-versed in science, human psychology, and the human mind’s neurological activity, at least as well-versed as a layman could be in the late 19th/early 20th century.  He is constantly questioning his experiences, and relates how many “seekers” latch onto the first realization/epiphany they experience, never pushing forward to deeper truths.
Ouspensky begins the book by discussing what modern society (his world in the 1890-1920 period) believed or sought to understand about esotericism.  He details the various sidetracks that people slid into in their search for hidden knowledge, including the lies and chicanery practiced by the Spiritualists of that era.  He explains that the true esoteric knowledge is knowledge about the world we all share that is only suitable or understandable by a select few, who need to have prior training or study to even comprehend these things.  He details how modern society has no place for these mysteries, leaving many to believe ridiculous lies and dogma because they have no access to the actual truths.
He then proceeds to explore the concept of the 4th dimension, time, and how it applies to our existence.  Much like Einstein did, Ouspensky seeks to understand the metaphysical implications of a four-dimensional world.  Similar to the tale Flatland, Ouspensky starts with a point in space (0 Dimension) and shows how that point moving in time creates a line (1 Dimension).  A line, being 1D can move in two ways in time.  Along its length, the line gets longer.  However, if the line moves in time perpendicularly equal to its length, then that line becomes a square (2 Dimensions).  If that square moves in time perpendicular to itself you end up with a cube (3 Dimensions).  We live in this seemingly 3 Dimensional world.  The trick part is, how do we conceive of a square, seemingly solid, moving perpendicular to itself to create a 4 Dimensional figure?  How does that figure then move perpendicular to itself to create a 6 Dimensional figure?  It is a very heady topic.
Subsequent chapters explore the idea of a “super” man as it has been handed down through time.  This is not an extra-powerful man, but a man that has transcended this 3rd Dimension in his mind, and become a 4 Dimensional being, without the usual intellectual issues and emotional failures that humans naturally possess.  Per Ouspensky, history provides us with examples of these ascended humans, such as Gautama Buddha, and Jesus of Nazareth.  Due to this, Ouspensky spends a good amount of time on what the Christ story actually means, and why the New Testament is a radically different sort of text than the Old Testament.  His claim is that the Gospel stories are disguised metaphors for the journey a human must make to transcend this 3D existence or materiality, and gain a new existence (a rebirth/reincarnation) as an enlightened 4 Dimensional being.
Ouspensky goes on to explore at depth that various systems that humans have used to understand, teach, and sometimes to disguise, sacred wisdom.  He analyzes the Tarot and its imagery, the four systems of Yoga, Dreams and the claims of Hypnotism.  The author then spends some time detailing his own personal journey into what he calls Experimental Mysticism, the active exploration of the mind, and his results are surprisingly lacking in gullibility.  This leads to what he titled the book, which is a New Model of the Universe.  This new model is intended as an exploration of what the new quantum and relativity sciences imply for our existence, hidden dimensions, and how we will evolve in the future.
For someone writing nearly 100 years ago, I found Mr. Ouspensky to have a very modern mind, cynical when it is needed, open when it is important, and willing to explore side streets and backwaters in search of truth.  This is a good example for others to follow.  I am confident that much of what P.D. Ouspensky has written is closer to the “truth”, if there is any truth to actually be found, than most any other work of esoteric wisdom I have come across.  It makes sense why this book resonated with Sun Ra enough for him to include it in his lesson plans.
(You can download and read this book in PDF form here: http://www.baytallaah.com/bookspdf/78.pdf )
Posted by Rob Instigator