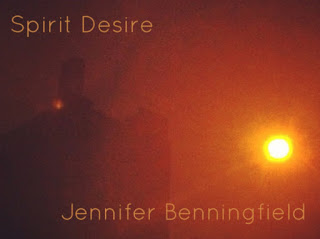 I am a Sonic Youth Lifer.  The skronkalicious foursome has been my favorite musical group for the past 30+ years.  As a part of my fandom, I have been a member of the Sonic Youth Gossip Forum for nearly the entire existence of the interwebs.  In that nebulous cul-de-sac I met and have befriended many a fellow Sonic Youth Lifer.  I have seen them grow up, rock out, and move on with their lives.  I have lost Sonic friends who passed too early (RIP Adam “atsonicpark” Cooley - http://directoradamcooley.angelfire.com/ ).  I was also exposed to some of the most creative, interesting, and downright bizarre people, all of them Sonic Youth nuts to one extent or the other.  One of these bad-asses is Jennifer Benningfield, or as she is known on the SY Gossip Forum, jennthebenn.  In 2009 she published her first book, No Setlist: Pieces of a Sonic Life, detailing her near-obsessive devotion to traveling for Sonic Youth concerts.  My review of that book is here: http://rxttbooks.blogspot.com/2017/06/rxtt-flashback-review-story-of-sonic.html .

It is now 2018, Sonic Youth have broken up, and the individual members have moved on to new musical projects, as varied as one can imagine.  Jennifer Benningfield has released the follow-up to No Setlist.  The development of her writing voice and style are evident throughout, as the book is tighter, funnier, and in many ways more resonant than her debut.  Like before, the book is divided into sections detailing individual Sonic Youth concerts she attended, describes the moment she and her partner in crime, Patrick “pantophobia” Suddath learned of the imminent breakup of our favorite band, and finishes with her treks to various post-Sonic Youth concerts.

If it was inspiring to me to read Ms. Benningfield’s initial love letter to the Youth, it was even more amazing to read this new book, appreciating the growth and maturity of writing that has allowed Jennifer Benningfield to submit her short stories to various hard-copy and online publications.  While I do not personally know her, having had little interaction with her besides the Sonic Youth Gossip Forum (and the Instigator Fantasy Football league which I run every year.  Jenn’s team is Snoopy’s Smash Squad, and anyone who knows her knows she has a near-fetishistic fascination with Charles Schultz and the Peanuts gang), I am so proud of this digital friend for grinding away, for continuing to write and submit, even though the rejections and tough times can seem never ending.  The band is very lucky to have someone such as her as a fan.

One of the little oddities that I found endearing in this book, is the way that, as a super-fan, Ms. Benningfield describes the journeys taken to the shows, the people she meets and stays with, the long-distance friends she connected with, the fearful walks through unfamiliar neighborhoods in search of a pre-show meal, and everything that goes into attending rock shows.  I myself have attended countless hundreds of not thousands of rock shows, and these little details are the ones that actually make the occasions memorable, apart from the musical performances themselves.  There is a huge difference between going to a big, national touring show at a giant arena, and going to a small touring act performing at who-the-fuck-knows-where.  It is more personal, more intimate, and if you are one of the early arrivals, like Ms. Benningfield likes to be, you can be in the FRONT ROW!  (I never ever stand in the front row.  I am 6’2” tall, and no one likes my ass blocking their view.)

Sonic Youth is no more.  The Sonic Youth Gossip Forum is creaky and increasingly less populated.  The Sonic Lifers have had to move on.  Our favorite band, the band that never even sold 250,000 copies of any release, that taught so many of us what noise as Art was, and the possibilities inherent in that, will never come together in skronk again.  All we have are our memories, and thanks to the mind and work of SY Lifers such as Jennifer Benningfield, we can all share in our collective Sonic Joy.  SONIC LIFE!

(This book can be downloaded and read here: https://trapperjennmd.blogspot.com/2018/07/spirit-desire.html)
Posted by Rob Instigator