When the Fake is treated as the Real, we lose the Real forever. 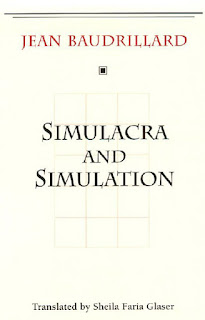 This book by the French intellectual Jean Baudrillard was on my radar for a few years, as it was regularly referenced by other authors and in books I have been reading.  It was always described as the source for postmodern thought and I can see why.  This book, basically a collection of essays, sets out to describe how the last decades of our society are unprecedented in our history, for the main cultural and societal issues are no longer about how to deal with reality, or the real issues of our world, but instead have become strictly about how to deal with what Baudrillard names as Simulacra and Simulation.

Simulacra are defined by Baudrillard as a representation of a real thing, but which contains no actual reality.  An example of this is when a film is made detailing an actual historical event. By virtue of its own artificiality it is most definitely not a true representation of the history presented.  It goes even further in that, once a movie about war is made and seen, any subsequent movies about war will not use real war as their base, but the fictional simulacra of war created in our collective minds.  Not too long ago, most literate people read two or three newspapers a day, absorbing the raw data of everyday life, and creating their worldview on that information.  For the past 50 years or so however, the focus of people’s inquiries into the world around them is drawn from fictional media, and the supposedly non-fictional media (newspapers, magazines, TV news, etc.) are in fact drawn directly from the same fictions that everyone takes as fact.  Basically, people know that fake is not real, but when you ingest mainly fakery, you will lose the ability to judge the real, or even lose the knowledge that the “real” is actually there.  That makes for an easily controlled populace whose fear is that their simulacra existence will be shattered by the intruding real world around them, and who readily attack and blame whatever they are told is causing their worldview to change.

This applies to all aspects of our world today.  Baudrillard describes how wars are no longer fought to gain an objective, but instead to create a simulacrum that fools the masses into accepting it as reality.  For example, he describes the Vietnam War as a fake war whose true purpose was to draw China into an agreement to work with the powerful nations of the west.  That is why, after 15 years of supposedly intractable warfare, and once the Chinese support of the North Vietnamese forces was exposed fully, the United States was able and willing to end the war in a lightning quick manner.  Forces were evacuated, the embassy left behind, and the people of Vietnam were left to fend for themselves once again.  China became a more open relation (Nixon went to China just before the Vietnam War ended), and the true goals of the war were achieved.

In essence, history is now our central Myth, to be shaped and recreated to suit whatever needs the powerful may have.  History used to be our source for the core of humanity, but when history is learned solely through simulacra and simulations, every possible nuance is lost in favor of the one thread that those who force these myths upon us wish us to focus on.

Baudrillard gives a great example toward the beginning of this book.  He details how the very study of remote tribal cultures by anthropologists essentially destroys that culture the moment they meet.  Having the scientists and film crews and equipment around is a world-changing event for these tribes, ruining what the very anthropologists are there to study.  In the late 1970’s a resolution was passed by the United Nations to stop studying a very remote , isolated, and recently “discovered” tribe in the Philippines, for fear that their culture would be ruined and that the world at large would “lose” this culture.  Basically, after having destroyed countless hundreds of indigenous tribes and groups, they decided to specifically choose one tribe to “save.”  This creates the illusion that the Philippine tribe will be safe and sound and left alone.  It creates the lie that states that a society can be interrupted and then left to go on with its business as if nothing had happened.  It also betrays itself, for how can we check to see if the tribe is indeed doing well if we do not intervene yet again to verify this data?

I can see why this book is so important to people who care about the internal state of our collective culture.  It shows the damage that has been forced upon our human society by those who wish to control it and benefit from it.  It speaks to the harsh rigor that must be maintained when trying to actively understand reality and what the truth of any situation or event may be.  It places great value on the ability to understand when we are being fed a simulacrum, and when that simulacrum is doing us a disservice.  In a world where everyone is fed fake versions of every truth, there can be no feeling of a collective humanity, no trust that the lessons of the past apply to today.  This is what is referred to as the postmodern.  The blame for mistakes and errors is no longer shifted to a leader, or a god, but instead is aimed right back at ourselves.  If our leaders commit horrors, it is our fault for letting them, for giving them “permission” to do so, even though we actually have no say in what they choose to do.  If industry ruins the natural world, it is not their fault, nor their leaders, but our collective fault for allowing it to happen, for wanting the products created by industry, even though we are deluded into wanting those products, and forced to live lives of consumption to prop up these industries.  These are the lies fed to us by those that control us. How does one stop a simulation?  How does one step away and live in the real when everything around you is dependent on the fake?  How do we decide what truly matters?

(This book can be purchased here:  SIMULACRA & SIMULATION  )
Posted by Rob Instigator