What are Words for when no one listens anymore? 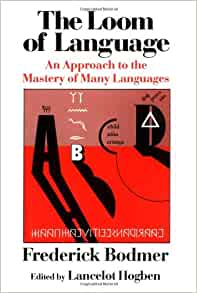 The Loom of Language: An Approach to the Mastery of Many Languages – Frederick Bodmer (1914)

The great Sun Ra has yet to let me down.  Previously, I ran across an article listing some of Sun Ra’s favorite books, or at least books that he felt were important to read.  The first two I read were amazing.  The first, Alexander Hislop’s TheTwo Babylons, explored the ways in which organized Christianity (the Catholic church specifically) merely redressed Babylonian “pagan” religion into a new outfit, presenting it as new and couching it in the ideas of Jesus of Nazareth. The second book I read from Sun Ra’s list was P.D. Ouspensky’s A New Model of the Universe: Principles ofthe Psychological Method in its Application to Problems of Science, Religion,and Art.  This book was even denser than the previous, as Mr. Ouspensky explored the ways in which humanity has sought to understand, and disseminate, what many see as eternal wisdoms, using modern science and psychology to dissect the paths to wisdom offered by churches, esoteric mystics, and occult organizations throughout human history.

In many ways, this current book, The Loom of Language, is equally as broad, for it seeks to not only describe the evolution of written and spoken Language, but it also hopes to educate the reader in how best to learn foreign languages. As a bi-lingual person (Spanish / English) I know the amazing benefits of speaking/reading/writing more than one language.  Mr. Bodmer, writing in the early 1900’s, also saw this benefit.  In this attempt to create a new method of language instruction, he saw international communication as the driving force for learning new languages. Ahead of the horrors of totalitarian Europe in the 30’s and 40’s Bodmer saw the correlation between a populace that does not expose itself to its neighbors or their language, and the slide into jingoism and deluded nationalism. This is what is happening in the USA currently, where anyone speaking Spanish, a language spoken in 90% of all New World countries, is assumed by ignorant people to be a criminal, “illegal alien” or poor and uneducated.  This leads to the worst kinds of overt racism.  It is even worse for the many Americans who hail from nations other than Latin America.

Too many people see Language as a static creation, when in fact it is an ever-evolving set of ideas.  Mr. Bodmer discusses the difference between a written language and a spoken language and how this affects how language is passed on to succeeding generations.  For example, in the Roman Empire there existed at the least two separate Latin languages.  One was the formal, codified, rigid Latin of the ruling class, religion, and the highly educated.  The other was an informal, spoken Latin, used by the masses in their day-to-day lives.  It was this informal spoken Latin that slowly morphed through time and distance into what are called the Romance Languages (Italian, French, Spanish, Portuguese, and Romanian).  Meanwhile, the Church, education, science, utilized the rigid formal Latin and politics for centuries after Rome fell.  In many parts of Europe, until the late 1800’s, university education was conducted in Latin.  Today many Roman Catholic Church services still hold Mass in Latin. (Funny aside, no one really knows how to pronounce anything in Latin, as it has been a dead language for centuries.  Even so, priests continue to vocalize what they feel is Latin-sounding pronunciations of their Mass.)

Mr. Bodmer not only does an amazing job of describing how languages morph and evolve, he constantly provides examples and word lists to detail how linguists came to know what they know, how they connected languages that seem disparate but come from common sources, and how they are able to explore seemingly dead languages by comparison to living ones.  This is just the beginning, for the bulk of the book deals with learning the actual languages, or at least learning the tools by which a reader can begin to explore new languages.  Long chapters provide detail on the grammar of Anglo-American English.  English as we know it today is very far removed from its Teutonic roots, having absorbed words and phrases from so many languages.  French, Spanish, and Greek are among the many languages that have found their place in the English vocabulary.

Bodmer details the many prefixes and suffixes found in English describing which ones are from what root tongue.  This mish-mash of language makes English a bit complex, as words that sound the same in the ear may mean completely different things, based on the source language.  For example, the Latin phrase “ante” means “before,” as in the words anteroom, antecedent, etc.  The Greek phrase “anti,” pronounced exactly as the Latin “ante,” means “against/not,” as in the words antipodes, antifascist, antagonist, etc.  While this makes English a tough language for a non-speaker to master, it allows an English speaker to understand foreign words much more quickly.  This may be why English has spread throughout the world as the unofficial language of international business.

The evolution of Teutonic and Romance languages is thoroughly explored.  At all turns Mr. Bodmer reiterates the need for an international language, capable of fostering communications between the people of the world.  This was his lofty goal.  It is scary to think that, just a few years later the horrors of totalitarianism, nationalism, and bigotry would turn much of the world into a war zone.  It would probably make Mr. Bodmer sick to know that, decades after surviving the cataclysm, our “leaders” continue to push our nations into authoritarian, jingoistic, nationalistic fervors.  “Us” versus “Them” is a pointless exercise, meant only to divide the people while those in power maintain their death grip on us.  Just like all human beings, all human languages, when traced back, come from the same place.  We are all together in this world, and languages add to that beauty.  It is upon each of us to try to learn more than one language, and by extension, to understand each other better.  I can see why a visionary like Sun Ra would recommend this book.  Anyone seeking to learn new languages would be well-off reading this.  We must continue to fight the good fight against willfully proud ignorance and intellectual blindness.