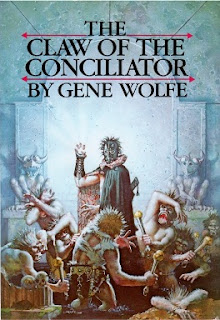 After a hiatus of quite a few months, in which I have occupied my mind with books on gender-disparity and anthropology, the horrors of Soviet-era gulags, early science fiction, modern science fiction, and Joan Didion’s exploration of her grief following her husband’s sudden death, among other books, I turned my attention to the second volume of Gene Wolfe’s The Book of the New Sun tetra-logy, The Claw of the Conciliator.

Gene Wolfe passed away in the time between my reading of The Shadow of the Torturer, and picking up this second volume. He was 87 years old.  In doing some research about his life I read that he was a fellow alumni of the University of Houston.  He earned his degree in Industrial Engineering, whereas I earned mine in Studio Art-Painting.  He received acclaim for his speculative fiction works at a late age, and was very highly thought of as a writer of wonderful prose by his fellow authors.  Gene Wolfe stated in a letter that his definition of a great story was a story, “…that can be read with pleasure by a cultivated reader and reread with increasing pleasure.”  These words describe quite well my favorite novels and stories.

The Claw of the Conciliator continues the story of Severian, a Guild Torturer traveling through a deep-future Earth, or “Urth” as it is called in the books.  Severian is the narrator/writer of this story, which Gene Wolfe states in a meta-narrative way is actually a found history that Wolfe is “translating” for us readers.  Layered storytelling such as this is something that requires a “cultivated reader,” as Gene Wolfe states in the above quote.  These novels are not for people who are new to literature, or to the depths of the English language itself.

Whereas many speculative fiction/fantasy novels seek to immerse you in a new world, very few actually do so without using the standard tropes and markers of our current existence.  This helps ground the reader, keeping them feeling as if they understand what is happening, simply because it seems familiar in some way, but it is a detriment when one is trying to create an otherworldly universe to set your stories in.  Gene Wolfe’s writing does not suffer from this, as every aspect of his tales, from the characters to the setting to the myths and legends that inform his work are deeply thought out and carefully self-consistent within themselves.  This is the hardest fiction to read quickly, or superficially.  It requires attentive reading, or what Gene Wolfe described above as a cultivated reader, someone who has read many of the seminal touchstones of human literature, and therefore brings within them the tools to fully grasp the story presented in these books.  I can understand why so many contemporary authors saw the greatness in Gene Wolfe right away.

I do not like to give away plot details of the fiction books I read, as finding out these things is part of the joy of reading them.  I will tell you that the Severian in volume 2 is a wiser, more tempered person than he was in the first novel, having experience so much in the interim.  He is beginning to untangle what are thousands of years’ worth of ritual and dogma associated with the world of Urth and its societal structures as he heads further away from home on his new assignment.  Severian is slowly perceiving a world, in fact a Universe, far bigger and more complex than he could ever have imagined.  His awareness increases our awareness, giving us a glimpse of what may come next.

A few days before finishing this novel I received in the mail the 3rd volume of the Book of the New Sun, The Sword of the Lictor (1st edition hardback baby!).  One of my Sonic Life peeps, named “Severian” after the main character of these novels, has been on my butt to read these novels and finish up the Book of the New Sun ever since he introduced me to these books.  Thy will be done Severian…


(This book can be read here: THE CLAW OF THE CONCILIATOR )
Posted by Rob Instigator