Following Aguirre's Footsteps Into Madness and the Amazon 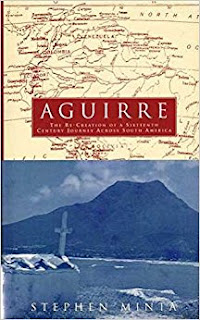 Aguirre: The Re-Creation of a Sixteenth Century Journey Across South America – Stephen Minta (1994)

As a whole, I am not a big fan of most travelogues, although I do enjoy them when I happen to come across an interesting one in a magazine or online article.  The kind I do find very interesting, however, is the type that attempts to recreate a journey from history.  I know that people have written books about their attempts to follow great explorers such as Marco Polo, or the route Alexander took to India.  This cool little book is a similar attempt to follow in the footsteps of an explorer, although one far more tragic and brutal than Alexander or Marco Polo.  Stephen Minta sets out to retrace the path Aquirre de Lope, and the Spanish expedition he was a part of, took to leave Lima Peru and head out on the search for the location of the legendary, and wholly fictional, lost city of El Dorado.

Mr. Minta is very well-read on this topic, having researched the topic extensively.  His insights into the difficulties faced by Aguirre and the others alongside him resonate with his and his traveling partner’s current-day experiences as they seek to retrace the route.  His view of the modern-day issues in Peru, from poverty to corruption to the difficulties of the terrain to the deeply inhospitable nature of the mountains and rain forests surrounding him also help to underscore how, despite the passage of time, the difficulties of governing and living in the high Andes mountains do not seem to change.  The jungle is ever present.  The heat is unbearable.  Roads and trails are sometimes destroyed by who knows what.  The smells of age and sweat and dirt and rot and death are always near.  If it is this difficult to traverse this terrain now, imagine doing it with hundreds of soldiers, hundreds of dogs, horses, and natives, all trying to make headway through what is truly a green hell.

Lope de Aguirre is one of the oddest historical figures around.  He was described by contemporaries as a severely common, half-lame, unrefined, unattractive, overbearing, and illiterate life-long soldier.  Mr. Minta states that “there is no one who knew Aguirre who ever wrote a good word about him.”  That is a rarity indeed.  In fact, it was during the long and arduous journey across South America that he became even more of a monster, causing the following proclamation to be passed upon his death requiring that: “Wherever the said Lope de Aguirre may have left dwelling houses, these should be leveled to the ground, that no trace or memory of them should remain: and that when they have been so leveled, they should be plowed over and strewn with salt.”  That is something straight out of a horror movie!  To think that this lowly man wrecked so much shop that the Spanish provincial government had to make an example of him after his death is something unprecedented.  I think part of the appeal of Aguirre’s story is that it resonates with that most basic of American myths, the idea that anyone, born anywhere, with nothing to their name, can come reinvent themselves in the New World, even if it is to become a monster.

I am so glad that someone like Stephen Minta has braved the inhospitable Amazon basin to recreate this journey.  I would never do so!  Thank goodness for books.  I first heard of Lope de Aguirre due to the Werner Herzog film, “Aguirre, The Wrath of God.”  I highly recommend the film.  Herzog actually took his cast and crew on a similar, and similarly ill-fated trip through the Amazon to film this movie, and it appears that the spirit of Aguirre was very much alive inside Klaus Kinsky, the madman actor who portrays Aguirre.  The madness is evident on the screen.  Having seen that movie several times, the tale told in this great little book really came alive in my brain.  Being a city-slicker myself, the idea of leaving all I know to traipse through an unexplored wilderness rife with disease, predators, and native tribes seems like pure madness, but then again, it may have taken a madman such as Aguirre to even contemplate these expeditions.  Normal, happy, well-adjusted people do not normally seek to explore, risking death all the while.  Humanity must give thanks sometimes to the nuts amongst us.  They risk what we cannot.

(This book is available for purchase here: AGUIRRE )
Posted by Rob Instigator