Loss, and the Grief that follows, has never been more honestly explored. 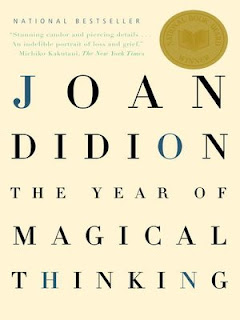 On the 10th of February, 1991, my father slipped from life after a long, debilitating illness.  My brother and I were at school, my mother was at work, and my grandma was at home with my dad.  We knew it was coming.  We had reached a point where we just didn’t want my father to suffer anymore.  He had been unable to speak for months, the cancer having dwindled his once robust body to a thin wisp.  He was barely 70 lbs.  He was 46 years old.

On the 30th of December, 2003, the author Joan Didion was settling down to dinner with her husband, having returned from a visit to the ICU where their daughter was currently under examination, when her husband stopped talking and slumped forward onto the table.  The paramedics were called but he was pronounced DOA at the hospital.  Joan’s husband John, a fellow author, was also 46 years old.

Losing a loved one over a period of months or years is its own kind of torture.  The living must come to grips with the inescapable fact that death is coming for someone they care about.  The grief hits way before death.  It hits when you no longer recognize your father in front of you.  It comes when you sit and think, “I am going to have to grow up all by myself, now.”  It struck when I realized my mother had to come to her own realization that she would continue living, while the person she had known since childhood, and married at age 21, and lived and loved and fought with and raised children with for decades would sooner or later be gone.

Joan Didion experienced a wholly different grief.  She had to suffer the grief of the unexpected departure.  Her husband died right in front of her.  Her daughter was under intensive care at a hospital.  She was alone.  She had to continue on alone.  This book, The Year of Magical Thinking, is a deeply personal exploration of a mind under the most acute grief.  As a writer, she is concerned with how thoughts form, why ideas are created, why thoughts occur.  In this book, she details her experiences not only with the nuts and bolts of what happens once someone in your house dies, but also the deep schism that occurs in the mind of the grieving survivors.

Joan Didion suffered much differently than my family did when we lost our father.  With our dad’s passing, there were few questions such as the ones Ms. Didion asks herself.  She repeatedly agonizes over whether there were something she could have foreseen, something she could have changed, or some action she could have taken that would have altered the oncoming cardiac arrest that took her husband.  She pores over the medical literature to try and make sense of what had happened.  Endless questions and regrets and what-if’s flit through her mind, but she comes to understand that it is the state of grief itself that is keeping her conscious thought from behaving in the rigorous, writer-worthy intricacies she is used to.  It is this state that she describes so well, and which is applicable to anyone and everyone suffering through the loss of a loved one.

I cannot imagine what losing my father would have been like had we to deal with what Joan Didion had to.  Their daughter was chronically ill, in and out of ICU’s and specialist clinics.  Joan’s experience with her daughter (who passed soon after the publication of this book) is perhaps closer to our experience losing our dad.  I cannot imagine how Joan Didion managed to survive this grief.  I can barely imagine how my mom survived losing her best friend, my father, and she had two healthy children.

Joan Didion has done a great service to people who are suffering from loss, or who know it is on its way.   As she describes in the book, Grief is a state of mental instability.  It is an imbalance.  The “year of magical thinking” she used as the title for this book is something may trauma survivors deal with.  In Ms. Didion’s case, the magical thinking consisted of believing that if she just kept his clothes clean, if she kept her husband’s library exactly as it was when he died, if she just continued on, her husband would come back.  She describes the shock her system received when the hospital called asking her if she was willing to donate her husband’s body to science.  “If I do so, he will not come back.”  Joan knew these were deluded thoughts.  She could not will her mind to think rigorously.

As she stated in the book, Mourning happens after Grief.  Grief is inconsolable, irrational, and erases all other hope and desire.  Some people grieve forever.  Some grieve so hard they end up dying from a lack of desire to live.  Other people work so hard at hiding their Grief that they end up doing irreparable damage to their own psyche.  It took over a year for Joan to begin to actually Mourn.  It took me far longer than that, as I distracted myself with starting college.

I want to thank my lovely wife Elizabeth Saenz for this recommendation.  I gifted this book, and the companion piece, “Blue Nights”, about the life and death of their daughter Quintana a couple of Christmases ago to her.  As the 28 anniversary of my father’s death came and went this year, with its typical onset of melancholy and sadness, she told me it was time for me to read “The Year of Magical Thinking.”  As always, she was correct.  Death is but the opposite of Life.  We will all suffer the loss of someone close to us.  We will all need to grieve and mourn at some point in our life.  This self-exploration of the grieving mind is an invaluable resource.  I think it would help many grieving people to understand that what they experienced was normal.  They need to know that we all suffer this way.  We all lose our minds in grief, whether Death took our loved one quickly, or over a prolonged period of suffering.

The hardest part of grief is the awareness that all the while, the world moves on, uncaring, and unconcerned about your loss.  Businesses must run, schools must start, and people must go on about their lives.  As we walk through our lives, we never know which co-worker, fellow shopper, or neighbor is in a state of acute Grief, but is sleep-walking through their life in the only way they know how.  It pays to be mindful of this.  In the wise words of Kurt Vonnegut, “We are all here to help each other get through this, whatever ‘this’ is.”

(This book can be purchased here: THE YEAR OF MAGICAL THINKING )
Posted by Rob Instigator