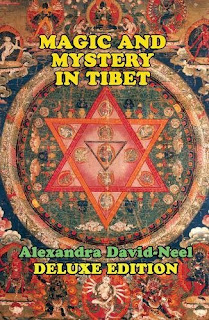 It is difficult to imagine that just 100 years ago the ancient land of Tibet located between China, India, and Mongolia was as little understood by the Western world as the surface of the Moon.  Its seclusion among the massive Himalayan mountain range led to many fantastic and seemingly supernatural stories regarding the people and gods that inhabited Tibet.  Rumors of forbidden cities, mystical monks, and ever-present deities could not be verified, or proven false, due to the inability of westerners to visit the country.  In the early 20th century, one indefatigable woman, having studied esoteric religions in India and Japan, sought to visit the “Lamaists” as she calls them. These “Lamaists” are the Tibetan followers of Buddhism, a philosophy more than a religion, which was brought to Tibet from India.  Purely through her devotion to learning and her bravery in the face of the unknown, Alexandra David-Neel managed to not only visit Tibet, but also live and study among the monks and Lamas for years.  Amazingly, she did this in her mid-40’s. This book recounts her experience with the magical/mystical side of Tibet and is one of many she wrote on the subject.

Before digging into the contents of this book, it is good to remember the context of its creation.  The late 1800’s to the early 1900’s saw a huge increase in “spiritualism” and the idea that the dead could be contacted by the living.  Thousands of scam artists and crooks used this to fleece good, although gullible, people out of their hard-earned money.  Many organizations, such as the Theosophists, were created to push the exploration of esoteric thought, and the attempt to gather ancient knowledge forgotten by the “western” world.  Alexandra David-Neel was one such woman.  She explored many facets of spiritualism, theosophy, freemasonry, Hinduism, and finally Buddhism.  As an educated woman, she also understood the role psychology and the workings of the human mind had in determining the experiences we have as we live our lives.  Ms. David-Neel, after traveling through northern India, felt drawn to visit forbidden Tibet, and she succeeded in doing so.  After years of travel in the Orient, she began to write about her experience.  These books, of which Magic and Mystery in Tibet is the second one, were the first non-sensational accounts of Tibet and its people that reached the Western world.  While initially the critics doubted her experiences in Tibet, these books and the ideas contained within helped shape much of the counterculture and metaphysical world that arose in the 20th century.

My favorite aspect of this book is that it reads not like a travelogue but more like a personal diary of Ms. David-Neel’s experiences and her reflections upon those experiences.  She shares the stories told to her by the many people she meets and explores the development of Tibetan Buddhism as a separate growth of Indian Buddhism.  Her acceptance of those she meets, and the respect and wisdom she brings to those meetings, make a large impression on the monks and Lamas she discourses with.  They accept her automatically as a student who wishes to learn.  This openness is not a result of Ms. David-Neel’s efforts, but instead comes directly from Tibetan Buddhist belief that anyone who wishes to can join a monastery and look for a spiritual teacher/guide.

David-Neel describes the ways a Buddhist monastery differs from the western idea of a monastery.  In a Catholic monastery, for instance, everyone is taught the same ideas, and are expected to accept them as literal truth solely because of the authority of “god.”  In Buddhist monasteries, it is up to the individual to determine if teachings have value to them, if they truly “believe” something, or whether they will proceed with the education.  Many regular people join monasteries but keep their esoteric learning to a minimum.  Others go deeper and deeper into the mystic truths of Buddhism, led only by their curiosity, and their master’s individual guidance.  It is truly an individual pursuit, attempting to accomplish a universal goal of oneness with existence.  As many Buddhists believe in the near-eternal cycle of death and rebirth, there is no pressing urgency to proceed with one’s education.  If a student spends all their life pondering basic ideas, it is because he needs to do so to prepare for a future life where larger ideas or more immersive theology will begin to make sense to the student.  The ultimate goal is to stop this round of death and re birth, and to successfully and completely dissolve one’s ego so that, upon death, you join the energy of the Universe, instead of being re-born.  This is called Nirvana.

Alexandra David-Neel explains that many in the West think that one must endure nearly endless cycles of birth and rebirth before one can achieve Nirvana.  However, learned Lamas do not think this.  They say that everyone, regardless of your spiritual training, has an opportunity after death to go into the light and enter Nirvana, dissolving one’s ego.  Most people, according to the Lamas, see the light and are faced with this decision after death but they experience only fear and doubt.  This drives them to avoid the light and instead head back to our “sphere” and be re-born again.  Part of the spiritual training given to these monks is how to be peaceful and calm so that, upon death, they can dissolve into Nirvana.

There is so much more explored in this book.  From describing the day-to-day lives of regular Tibetans, to sharing personal anecdotes of Ms. David-Neel’s psychic explorations, to the descriptions of the beautiful Tibetan countryside, this book has provided me with countless ideas to think about.  I will seek out Alexandra David-Neel’s other works, as I enjoyed this one immensely.  There is nothing quite like a first-hand account from a place strange to me to get my mind flowing.  I would love to visit Tibet one day.  For now, Ms. David-Neel’s books will be my travel.

(This book is available for download as a PDF here: https://www.theosophy.world/sites/default/files/ebooks/magic-and-mystery-in-tibet1931.pdf )