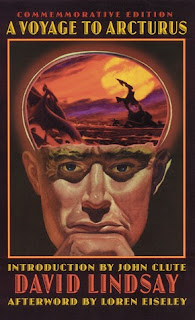 As a life-long fan of speculative fiction (science fiction and fantasy), I always have my ears out for any mention of the seminal writers in these genres.  These are authors that wrote their stories and books before the idea of science fiction had actually coalesced.  Early influencers like H.G. Wells, Alfred Bester, or Mary Shelley wrote amazing stories, each full of such imaginative ideas that they helped shape and guide speculative fiction all the way to the modern day.  In reading about the writers that influenced J.R.R. Tolkien, I came across mention of David Lindsay and his novel from 1920, A Voyage to Arcturus, which the article claimed Tolkien used as a source material for the narrative structure of The Hobbit.  While this was evident as I read A Voyage to Arcturus, what became clearer to me was the ways that this novel differed from The Hobbit, or the other Tolkien works.  A Voyage to Arcturus explores the nature of being and existence in ways that Tolkien did not.

As with many stories from the era involving the supernatural or otherworldly, the story here begins when a group of well-heeled guests arrive at a posh, yet, spooky home for a Spiritualist séance.  Spiritualism began in earnest in the northeast United States around 1880, and by the time of the publication of this novel, was at the forefront of public consciousness.  It was all a massive crock of shit, but humans are easily fooled into believing something unnatural has occurred.  They truly believed that a con-artist would be able to draw a dead spirit from the netherworld to speak to them at a party, as if the dead soul had nothing else better to do.  The protagonist in this tale, Mr. Maskull attends the séance, and along with everyone else, is shocked when a spirit appears.  What happens next is the prelude to the true journey in this story.  Maskull travels to the other side of the Universe, to a planet called Arcturus.

When Maskull arrives, he is all alone.  He encounters various people as he makes his way through the unknown land where two separate suns shine.  These people tell him contradictory things, yet they seem to enlighten Maskull and propel him forward in his journey.  Throughout his travels the author describes a world so alien, yet composed of similar forms to the world we know.  The physical laws of this world are not what they are on Earth.  Lifeforms appear, change, die, and are re-absorbed.  Humanoid beings of various types are met, some claiming to know Maskull, and some who want something from him.  As Maskull travels through Arcturus, he begins to peel back the layers of understanding, until he is no longer aware of what the real truth of his life is.  It parallels Gulliver’s Travels in many ways, although the people that Maskull meets are not as archetypically delineated as those that Gulliver meets on his travels.

Each person gives Maskull their explanation for why they exist, why the world is what it is, who created it, and how it came into being.  Some of these are contradictory to each other, and serve to show the reader how much of our existence is purely based on the narrow scope by which most of us view the world.  Maskull grows and changes, but never seems to find his place, until he is shown why.  I wish I could expand more on this all, but I do not want to spoil what is a very cool and intriguing novel.

Tolkien may have used A Voyage to Arcturus to help frame his first novel’s narrative structure, that of a quest taking the protagonist through various locales that are actually metaphors for the world around us.  In every other way, this novel is much more concerned with the esoteric, the ineffable, and the ephemeral.  It is these aspects of consciousness that David Lindsay sough to explore in this book, and which make it so enjoyable to read.  So many 100-year-old stories suffer from their dated tropes, but the early speculative writers were working on a blank canvas, with no rules, and they were able to craft some of the most interesting stories because of this.  I recommend this novel to anyone who enjoys The Hobbit, Gulliver’s Travels, or any other such fish-out-of-water speculative fiction.