Finding Meaning and Purpose, even in the worst of times, is what makes us Human 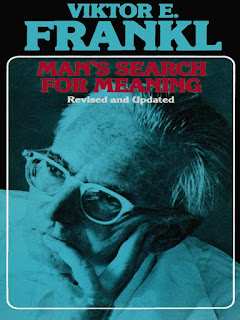 In the past 6 years that I have published reviews of the books I read, there have been a few that dealt with the horrors of war as seen by people held in prison, concentration, and extermination camps.  In each narrative, the brutality and base evil that humans are capable of seems overwhelming, and unavoidable, but there are always people who manage to keep some semblance of humanity burning inside them, allowing them to continue to seek life where others seek oblivion.  This goes for both the oppressed and the oppressors.  Viktor Frankl was a doctor whose entire family ended up in the Nazi concentration camps.  Out of dozens of extended family members, only he and his brother survived the horror.  This book is not only an accounting of his experiences, but of how they shaped what he calls Logotherapy, his method of psychiatric therapy focused on the Search for Meaning.  Logos means “ideas”.  This therapy focuses on helping us reframe how we see the universe, our place in it, and the meaning found within.

Viktor Frankl reached a very deep understanding of what it is that makes us human, and what keeps us moving forward in spite of insurmountable odds, or oppressive horror.  Because of this, he saw that what truly drives humanity to neurosis and makes life unbearable is the lack of meaning, especially during suffering.  In the early 1900’s, Dr. Sigmund Freud saw the source of man‘s neuroses as mainly rooted in failed Sexual development.  Other prominent psychiatrists of the era saw our neuroses as developing from our will to Power, especially what happens when the human is powerless over their own life.  Viktor Frankl realized something else far more important and pervasive.  Most human neurosis arise from the lack of Meaning in our lives.  He understood, and saw clear evidence of this in the concentration camps, that a human can survive, and maybe even grow, in the middle of endless suffering if only there is something which can provide meaning to their existence.

Some people find meaning in religion or spirituality.  Others find it in living for someone, like a child, or a lover.  Some of the people who managed to survive with their minds intact found comfort in helping those around them.  It does not matter what it is that provides Meaning in our life, as long as it is honest to ourselves and exists apart from us.  Humans need to know that there is something out there bigger than our suffering.  Dr. Frankl quotes Nietzsche often, stating the following: “Those who have a ‘Why’ to live, can bear almost any ‘How.’”

Dr. Frankl provides examples of individuals from the camps who each found their own reason for why to continue living.  One woman, suffering from Typhus, kept a peaceful air about her.  When asked about it, she mentioned that she talked to the willow tree outside their barracks, and that the tree talked back to her.  When asked what the tree said, she stated that the Tree told her, “I am Life.  Life continues.  Life is eternal,” and that these thoughts alone helped her deal with her slow, agonizing death.  She could not even see the tree, just a few branches through a dirty window.  That was enough for her to avoid true despair. True despair kills, and it kills quickly.  Viktor Frankl describes how they could all tell 24-36 hours ahead of time when a fellow inmate would die.  They saw the signs, clear as day, that this individual’s will to live had disappeared.  Perhaps they smoked their last saved cigarette.  Perhaps they failed to wake up on time and slept all day.  Perhaps they stopped talking their usual patter.   In the rigorously regimented routines of the death camps, any deviation was noted.  It was not the pain that killed these people.  It was not the starvation, the beatings, or the terror.  It was that they saw no further reason to continue living, to continue breathing and waking up.  Frankly, this was the end goal of these extermination camps, to make the poor people inside realize they were subhuman and deserved to be exterminated.

The second part of this book details Viktor Frankl’s Logotherapy, and the way that helping people by adjusting their views on life and its meaning and purpose.  He describes many of his patients who had severe neuroses, and who he helped through Logoterapy. They received help in adjusting what they saw as the Meaning of their lives.  He also describes how the lack of Meaning causes neurosis.

For example, Viktor Frankl describes a study done among European and American university students.  The study asked the students to describe their level of boredom, to try and correlate why boredom leads to feelings of nihilism (that nothing matters, that there is no meaning anywhere).  About 12% of European students felt their life was meaningless.  About 60% of American students felt this way.  In Europe, social, familial, and regional ritual and tradition provide a framework by which European students frame their lives and the meaning of their lives.  These traditions do not exist in America.  Sixty percent of American students felt they had no real framework by which to assign meaning to themselves and their existence.  When a human feels disconnected from their surroundings, apathy abounds.  Nothing matters.  Alcoholism, drug abuse, sexual carelessness and deep rage fester.  Meaning is lost.

Why get up and go to work?  Why bother cleaning my house?  Why bother caring about anything at all?  These are all deep existential questions, and Logotherapy aims to help the individuals answer that for themselves, allowing them to understand that our lives are always a part of something greater, even if it all seems hopeless.  Even the least of us can find meaning greater than ourselves.  Think of the homeless man that still finds a way to feed a stray cat or dog.  Think of the political prisoner who uses their letter writing to achieve a greater end than just their release.  Think of the woman who suffer through a life with a horrible man, but still manage to provide their children with love and a home and a loving mother.  Why we live is more important than How we live.  We are all responsible for how we behave, regardless of the situation.  Even in the brutality of Auschwitz concentration camp, there were still some guards, although few in number, who stayed human, who still sought to protect the inmates, who would go out of their way, risking punishment, to provide some sick men extra bread.  They did not do these things because they thought they could change the system, but because it would make them INHUMAN not to do these things.  The very best of us live our lives for the greater good.

“Everything can be taken from a man but one thing: the last of the human freedoms – to choose one’s attitude in any given set of circumstances, to choose one’s own way.” – Viktor E. Frankl

(This book is available for download as a PDF file here: https://antilogicalism.com/wp-content/uploads/2017/07/mans-search-for-meaning.pdf )