Freeman Dyson describes his life and science, and his hope for humanity. 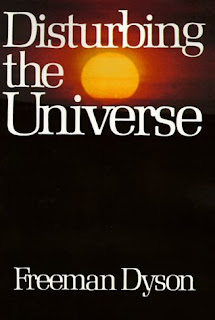 While exploring the bibliography section of some of the science books I have read recently, I came across a mention of this book, by noted theoretical physicist and mathematician Freeman Dyson, and thank goodness the amazing M.D. Anderson Library had a copy for me to check out.  I had previously read that Mr. Dyson wrote some very interesting books which did not stick strictly to equations and mathematical rigor, but instead explored the Universe through Mr. Dyson’s inquisitive mind.  These types of books provide a great insight into the minds that have shaped our modern scientific world.

The preface to this book details the circumstances leading up to its writing.  The Arthur P. Sloan Foundation started a book series.  They requested eminent people, people who were the leaders in their respective fields, to write something for publication.  It could be a small tome on pure mathematics, or a detailed history of a great scientist’s life, or, as in the case with Freeman Dyson, an exploration of his own life in the sciences, mixed in with the wisdom and gathered insights that he developed through his life.  Because of this, the title of the book,  Disturbing the Universe, is very apt.  The story contained within is of Freeman Dyson and the many times in his life where a chance encounter, a choice made, or an accidental experience, have led to a shake-up, a disturbance, in the way he saw and understood the Universe at large.

I love how this book begins.  It pays homage to the written word and the human imagination as being the grounds upon which greatness is dreamed of.  Mr. Dyson begins by detailing a children’s science fiction story that really stuck with him from his childhood, The Magic City by Edith Nesbitt.  This story detailed an alternate world, and Dyson mentions one rule that the story’s citizenry needed to heed.  In this world, you are free to choose to use any type of technology available, but, once chosen, the individual would have to use that technology, and ONLY that technology, for the rest of their lives.  For example, should a person choose to use roller skates as a means of transportation, that person, once they chose, would be denied the use of any other transporting technology.  This idea became a metaphor for Freeman Dyson.  He came to understand that any technology that is created by humans has the power to alter anything and everything that comes after its creation.  The scary part is that, as Freeman Dyson explains, 99% of all new technology stays purely as a clever toy for the powerful and rich few.  Only around 1% of all created technology finds a wide use and spreads throughout the human world.  The problem lies in that there is no way to predict what tech will catch on, and what the moral and philosophical implications and repercussions will be.  Once the printing press was invented, there was no shortage of people who sought to destroy or abandon this technology because of the fear that printing presses would allow for the dissemination of ideas and knowledge contrary to what the powers-that-be wish the masses to read or know about.  Freeman Dyson understood that this same problem applies to even seemingly innocuous technology, such as household goods, and not just to new weapons or giant machines.

Mr. Dyson goes on to discuss his education and development into one of the premier mathematical and theoretical minds of the 20th century.  He details his involvement in the British Air Force during WWII, and how the omnipresent bureaucracy showed him the blind stupidity of man, the illogic of “leadership”, and the brutality of those that send our youngest to die in war.  He saw the stupidity of the Air Force equating mission successes with number of sorties flown, or number of planes involved, and not with whether the target was actually hit, whether the crews came back alive, or whether their methods were pure suicide for these air crews.  The crews were never told the amount of planes and airmen that came back or that died or that were lost.  They were fed lie after lie after lie to keep them motivated to enter unsafe flying targets and get blown the F up over some unseen and unimportant target.  This shaped him very much.  He stated that when he moved to the USA, it was not until the Vietnam war that the people of the USA lost their innocent and naïve belief in the inherent goodness of their leaders.  The British and most of Europe had lost this during the interminable First World War.

One of my favorite passages deals with Freeman Dyson’s relationship with my idol, Richard P. Feynman.  The two worked together while at Cornell University, and shared a road-trip across the USA.  His descriptions of Feynman and their relationship are so cool.  Freeman Dyson was lucky to work with the greatest minds around, from Feynman to Hans Bethe, to Robert Oppenheimer.  He is very honest in his portrayals of these peers of his.  It is always reassuring to me to hear of how deeply scientists can disagree over issues and still maintain a collegial working relationship and even be very close friends.  More people could learn from such things.

Much of the latter half of this book deals with the various political and social engagements that Freeman Dyson took up after his main work was complete.  He is candid about his failures and humble about his achievements.  The last chapters deal with Mr. Dyson’s vision for the future of humanity, of life itself, and make for very moving reading.  I wish his vision of our future indeed comes to pass, allowing humans to differentiate themselves by exploring our solar system, creating colonies, and spreading Life through the cosmos.  Dyson has done the math and he feels, much like I do, that, while Life existing on Earth seems to point to the ability of Life to be anywhere in our Galaxy and Universe, the truth may very well be that the myriad conditions needed, not only for cellular Life to develop, but for the planet to be stable enough for Billions of years to allow for the creation of “Intelligent” Life, are only found here on our Planet Earth, out of all the possible worlds of our Multi-verse.  If there are a quadrillion planets in our Universe, and the odds against Life arising are 1 in a quadrillion, then we are indeed alone.  If the odds turn out to be 1 in a septillion or bigger, then the very existence of Life on Earth can be seen as the ultimate miracle and all of our humanity as a blip in the vast expanse of space-time.  I too think we humans have a mandate to spread Life, in all forms, throughout the Galaxy and then the Universe.  I hope Freeman Dyson’s vision comes to pass.  I will definitely be on the lookout for more books by Mr. Freeman Dyson.