Trees, seemingly simple, are as complex as any life-form 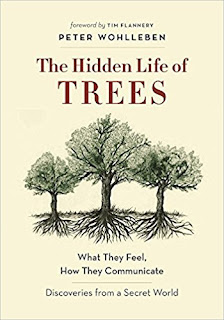 The Hidden Life of Trees: What They Feel, How They Communicate: Discoveries From a Secret World – Peter Wohlleben (2015)

I have always been a huge fan of trees.  In my early childhood, which was spent in the sub-tropical island of Puerto Rico, many of the trees provided fruits and veg of some kind.  I loved this.  No matter the season, there was something good to eat from the trees outside in the yard, whether it was tamarind, guavas, scotch bonnet peppers, breadfruit, coconuts, etc.  When I was around 8 years old my family relocated to the city of Houston, Texas.  I was distraught at first that there did not appear to be any fruiting trees around, but then I discovered the pecan and the Loquat trees that grew everywhere.  Once again, the trees were providing me with food.

In the years since I have learned more and more about trees, their life cycle, and the many varieties, but there did not seem to be much scholarship that treated the trees as organisms deserving of careful study. Trees were seen as static, dull, and lacking in any of the qualities humans appreciate in other lifeforms.  Thank goodness for people like Peter Wohlleben, a former forester in Germany who left his work to become a scientists specializing in the life-cycles of trees.  His personal experience with the way that humans attempt to control trees, to shape them for our own aesthetic pleasure, and prep them for future harvesting was in stark contrast with what he came to learn about individual trees, species of tree, and whole communities of various tree types.

One of the most controversial ideas espoused initially by Mr. Wohlleben, and since corroborated by many different researchers, was the topic of communication between trees.  Most humans assume that plants cannot possibly communicate.  We assume that communication is reserved for organisms with a brain, or with social structures.  This is a deeply held bias, based on erroneous ideas spread for centuries through religion, concerning the supremacy of certain creatures as opposed to other creatures, and the dominance and value found therein.  The truth is that all life communicates, whether it is a large 400-year old Oak, or a small protozoa that lives only for ½ a day. A brain or a nervous system is not required for communication.

Trees communicate in many ways.  Some trees of the same species will make underground connections through their root systems.  The tips of these roots contain very special cells, cells which seek out nutrients, water, air, and other plants.  The roots of these species will connect and share resources.  When one tree needs more water, the other trees will provide it.  If a large old tree, one that had supported various smaller offshoots for decades or centuries, dies from an accident, the other trees will continue to “feed” the leftover stump and root systems, sometimes keeping them alive for several hundred years.  This requires communication.

Another way trees communicate is with chemical signals.  Certain trees, the acacia for example, are a favorite of grazing animals in Africa.  A giraffe will start munching on an acacia tree and the tree can sense this somehow, which causes it to begin releasing a specific chemical cocktail into the air.  This chemical floats in the breeze and “informs” the other acacias to begin producing bitter chemicals in their leaves.  The initial tree warns the others of danger so they do not get eaten!  The signal fades after about 100 feet.  The giraffes are smart, and after gnawing on one acacia, will walk at least 100 feet away from it to begin grazing anew.  They seem to know the trees have communicated!  Other trees will feel a bug digging into their bark, and release a noxious chemical through their whole trunk which will kill or repel these bugs.  Trees have immune systems!!!!

I wish I could talk about all the cool things I learned from this book.  One of the saddest things I learned is the state that city trees and park trees suffer in.  They are not able to create connections underground with similar trees.  They are essentially orphans, and live their lives in high risk.  Orphan trees do not have the support from surrounding trees to protect them during storms.  They do not have the other trees helping them during times of drought.  They do not ever “talk” to any other trees.  These trees are hermits, living in isolation.  They grow stunted, or mangled, or warped compared to their forest brothers.  They die young, and suffer greatly from pests and fungi and other natural enemies whose detrimental effects are buffered by a forest of trees.

Any and all divisions that we humans see in the living world are created and enforced by our own ideas, whether misbegotten or accurate.  Life existed for billions of years before the rise of modern Homo Sapiens Sapiens, and will continue long after we are gone or replaced as a dominant species on this planet.  The genetic difference between all humans is minuscule compared to the genetic differences between different trees of the same species!  They are constantly evolving, adjusting, migrating, and procreating. They have been doing this for so long, without our help, and to treat them as purely a source for materials or as a natural resource undercuts the dignity that every living thing should be treated with.  Hopefully this great book will open eyes and minds, and allow for a true co-existence between humans and our tree friends.

(This book is available for purchase here:  THE HIDDEN LIFE OF TREES  )
Posted by Rob Instigator