Joan Didion captures the rage felt by those who mourn 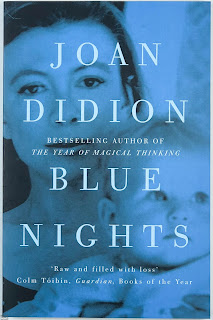 About two and a half years ago, thanks to the repeated insistence of my beautiful wife Elizabeth, I absorbed Joan Didion’s “The Year of Magical Thinking,” in which she explored the state of her mind reeling from the sudden passing of her husband.  It was as honest and profound an examination of the experience of Loss as I have ever come across.  About seven months after I completed that book, my own mother passed away, over a quarter century after my father left us.  She never stopped mourning my father’s death in her heart, and she remained devoted to him through all things.

The loss of a partner, which both Joan Didion and my mother experienced, is more of a shock than the loss of one’s parent.  We are supposed to outlive our mom and dad, but our life-partner is supposed to be there with us forever.  The idea of losing a child? Incomprehensible to most parents.  My mother’s mom saw three of her children pass away before her.  Joan Didion lost her adopted daughter soon after losing her husband.  While “The Year of Magical Thinking” details the loss of mental focus and the intensity of memory and grief, “Blue Nights” rages at the loss of her daughter.  My mother once said the worst thing in the world is for a parent to lose a child.  Her own mother, herself a widow, told her this.  I cannot imagine a more true statement.

This is not a grief-stricken book.  It is an anger-filled self-examination.  Joan Didion may be a petite, refined woman, but her heart and mind are of a different type.  She uses her mind as if her life depended on unflinching honesty and truth, which is similar to the many of us who live in mourning or grief every day.  She asks herself questions which, I would imagine, almost all mothers ask themselves but which most mothers would never admit publicly.  Joan does not always have answers.  That is a truth of life.  We all have more questions than we can answer.

Early on in the book, Ms. Didion describes the process by which her and her husband adopted their daughter Quintana.  To them, it was magic.  After communicating their desire to adopt to friends and family, they received a phone call from a Doctor acquaintance stating that there was a beautiful baby girl needing a home.  Joan describes the joy they felt answering the call, shouting in glee, heading over to the hospital to meet their new daughter, waiting to take her home, and then, 6 months later, officially adopting her.  Joan then tells of how this dream of a story was taken by their adoptive daughter. She would ask her parents to please retell the story, the wonderful story of her adoption.  However, for Quintana, this story brought forth questions her mom found unsettling in hindsight.  Quintana would listen to the story.  She would then ask her parents questions such as, “What if you had not been home when the Doctor called?”, “What if you had a car accident on the way to the Hospital?”, or “What if you had seen me and not loved me?”  These questions, which can break a parent’s heart, shed light on an issue many adoptive children have, which can be framed thus, “If my birth parents abandoned me, then how do I know my adoptive parents will not do the same?”  Brutal.  Some questions and ideas are too much for a young developing mind.

As she writes, Joan Didion examines what she felt were the blind spots in her caring for her daughter, for all parents of sick children ask themselves such questions.  What did I miss?  What was my child trying to tell me?  Did my actions make her life worse?  Was she happy?  For Joan Didion, these are not easy questions to ask nor answer.  Quintana had many health issues in life, but she was a strong soul, eventually marrying the love of her life.  The anger Joan Didion feels, which is reflected in her writing, is the rage all those of us who experience profound loss and feel helpless inside.

People assume grief is about sadness.  It can equally be about rage.  Pure, unadulterated rage at the world, its inhabitants, its rules, and whoever the hell created it all.  Joan mentioned a comment directed at her by caring friends and family in the weeks following her daughter’s death.  “At least you have your memories.”  It sounds nice enough, but only someone who has never experienced true loss and grief would imagine it to be so.  I, like Joan, know the actual truth.  The memories are what HURTS.  The memories are what bring back the loss and the pain and the sorrow like it was yesterday, for in our minds and hearts, it was just yesterday.  The memories are what stops you from living your day-to-day life.  It can be something as inconsequential as a whiff of perfume, or the sight of a specific flower, or running across an item loved by those you lost.  Joan describes this and it is just so very true.  There are no “happy” memories.  There are just memories, reminders that someone who once existed, and who once meant everything to you, is now gone, and we are left behind to pick up the pieces and move on.

Joan details how, having lost her husband and daughter, her deepest remaining fear is not the end of her own life, but the knowledge that when she dies her memories of Quintana will die with her.  As she states at the end of this book, “The fear is for what is still to be lost / you may see nothing still to be lost / yet, there is no day in her life in which I do not see her.” Some say that we are not truly dead until the last person that remembers us has passed.  Joan Didion understands that burden completely.

(This book can be purchased here: https://www.thejoandidion.com/blue-nights )