An Exploration of Symbols and Teachings from all of Human History 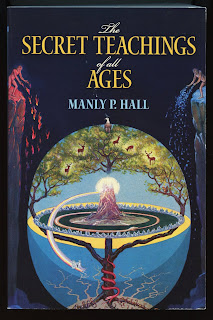 The Secret Teachings of All Ages: An Encyclopedic Outline of Masonic, Hermetic, Qabbalistic and Rosicrucian Symbolical Philosophy, Being an Interpretation of the Secret Teachings concealed within the Rituals, Allegories, and Mysteries of all Ages – Manly P. Hall (1928)

As can be surmised from the title above, this is one of those books that appeal to me above all others.  In these collected pages, Mr. Manly P. Hall digs into the lifetime of esoteric and comparative religion studies which he concentrates and arranges for my pleasure.  There is nothing I love more than a human being smart enough to read widely on any given subject, who proceeds to then coalesce everything they have put into their brains into a work of literature.  This is one such book, and due to both the density and depth of the subject, it has taken me a good while to complete.

Writing about such a book is very difficult.  Not only is the subject matter one that requires both rigor and imagination to understand, but Mr. Hall is discussing the entirety of human symbolical philosophy, going as far back as possible into our collective human past.  Even 5 years ago I do not think I was mentally prepared to absorb what Mr. Hall has provided.

This is one of those books used by countless other writers as source material.  It is encyclopedic in scope, and everything is explored with an honest and logical demeanor.  The myths and symbols described by Mr. Hall, whether pertaining to ancient Greek Mystery Schools, the Egyptian traditions, Freemasonry, Hebrew mysticism, or mystic Christian theology are explored without bias, and always with an eye on the hidden truths contained therein, truths which at many times in human development were either scandalous, dangerous, or subversive enough to be jailed or killed for.

Many people of recent times have sought to “discover” these ancient truths, either by personal study, seeking a guru of some kind, or joining organizations like the Freemasons or other fraternal bodies still using the ancient symbology.  While wisdom is to be found in all things, the search for these hidden truths requires a lifelong passion for learning and the ability to see beyond the basic definitions and interpretations offered by other seekers. Manly P. Hall is great at this.

Often, the truths that must be hidden from the masses are not mystical or supernatural.  They are instead truths about the reality and world we all exist in but which the powers-that-be at any given time in history see as dangerous to either their respective status quo (i.e. the divine right of kingship, the infallibility of religious leaders, etc.), or to the mental “well-being” of the masses, usually treated as ignorant sheep, barely conscious enough to warrant the title Human.

Many of the key “secrets” of the ancient Mystery Schools actually dealt with what we would now call scientific data or mathematics.  For example, the ancient Greeks understood somehow that the Earth was a sphere travelling around our Sun, that human life was in no way separate from animal or plant life and that all life was in its various stages of development, and that the primacy of the “human” is an illusion.  These were not facts you could disseminate on pamphlets or by orators.  These facts lay outside the “truths” espoused by the political, social, and religious powers of the time, (sadly, in our modern world, they still do for many people).

Shining beacons of human thought such as Aristotle and Pythagoras saw through the lies, and sought to understand the world based on their pure rational thought.  They created schools where hand-chosen successors would be taught these truths, once the veil of ignorance had been removed by proper education.  These students would then become learned “masters” and proceed to teach a select few in the next generation.  By this method, timeless knowledge and wisdom was transmitted secretly, while the masses of humanity remained ignorant.  These “illuminated” humans were so respected that after death they passed into legend and myth, alongside Prometheus, the being who took fire from the Gods and gave it to humanity.

Because of the volatility of the knowledge involved, symbols and allegory became the main methods of transmitting the information.  “For those with eyes to see and ears to hear...” is how many ancient texts begin.  Implied is that, within the text provided, are secret and important truths only understandable to those who have been taught the meaning of the symbols and the history of human understanding.  Using this knowledge, Mr. Hall explores our collective history.  Whole chapters are devoted to Qabbalistic symbolism, the New Testament and Christian mysticism, The Hermetic mysteries, and the development of the Tarot, just to provide a few examples.

Understanding the symbols and myths Mr. Hall describes opens the mind to the interconnectedness of all human thought.  This does not just cover facts and data, but the esoteric studies of human consciousness as understood by our ancient predecessors.  Many religions besides Christianity discuss a concept of the Trinity, or the triune nature of a “god.”  Manly P. Hall describes how this is actually a description of the human being themselves.  According to the ancients and the mystics, each human is composed of three parts.  There is the physical mind and body, built from the same components as the Earth around us (ashes to ashes, dust to dust).  There is the “soul,” which describes the individual ego contained within our physical minds.  There is also the “spirit,” which designates the part of each of us that is imbued with a small piece of the divine, for as we are of the universe, the universe is of us.  As has been stated by many, “we are the Universe seeing, studying, and trying to understand itself.”  This is a deep truth, and something which shatters the dogmatic lies imprinted on much of humanity by religions.  It means we are all part of the divine.  The divine is part of all of us, and it does not stop at humans.  All animals, plants, fungi, rocks, minerals, and chemicals are divine as well, possessing their own path through what we call “life.”  The same applies to aggregations of matter, such as planets, stars, galaxies, etc.

The cells in your body are alive.  The cells in your body are mostly replaced after 6-8 years have passed.  You are alive, regardless of whether the cells in your body are the ones you had at 11 years old, or the ones you have now at your current age.  Something apart from the physical stayed in your body and keeps it being YOU.  You are not alone in life.  You interact with everything around you in so many ways that the human mind ignores around 99% of all stimuli.  We are filters for the Universe.  The problem lies in that too many of us believe that only the stuff we “filter” out is real.  We rely on our frankly inadequate minds to process an infinite Universe.  The ancient Masters were hoping to improve humanity by sharing this information.  They just understood that one must be ready for learning, for learning is change, and change can be very disruptive, even when for the best.  Even today, in our “modern” world, most people are not ready to receive true wisdom.

I could write on and on about this book, but it is best for you to read it yourself if it sounds interesting.   Quite often, I would find myself reading a passage or sentence which led my mind to connect ideas/thoughts previously unaffiliated. Manly P. Hall has a way of guiding his readers, much like the old masters did their students.  He sometimes does not flatly state things, as much as provide the reader with a starting point for their own exploration.  I love this.  I read to be enlightened, and to have my mind think new thoughts.  In that, this book was a glorious triumph.  I expect to hunt down a physical copy and re-read this work again sometime.  Much like classic literature, there will always be something new to discover about myself, and my fellow humans in this book.