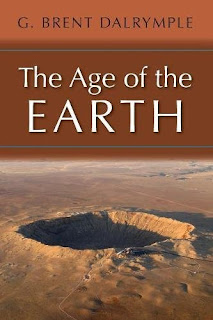 Back in the late 1970’s there began a series of challenges to the scholastic curriculum of schools in Alabama.  Certain religious idiots wished to force the school boards to devalue the teaching of natural selection, geology, and other science topics, while pushing the “alternate theories” of christian creationist bullshit that states the Earth and the Universe were all created sometime around 5,000-6,000 years ago (even though the nation-state of Egypt has been around for at least twice that long….morons.)  During this time Mr. Dalrymple was asked by the state if he could testify on the behalf of the science.  Mr. Dalrymple, being an eminent geophysicist and geologist, spent the better part of 5 months preparing, only to have the case be thrown out before it reached the courtroom.  Sadly, even more proudly ignorant people tried to do the same in other states, so Mr. Dalrymple saw that a need existed for a book that could explain the very many methods by which scientists have determined not only the approximate age of our planet Earth, but also the age of the Solar System, our Galaxy, and the Universe as a whole.

A big part of how ignorant fundamentalists of every religious stripe manage to continue their assaults on everything good and decent in the world is their reliance on the lack of substantial scientific knowledge in the general American population.  Most US public schools teach the very basics of science, much of it severely outdated and archaic, but still needed as a foundation for what actual science is doing currently.  The problem lies in that schools are never given the chance to teach everything we currently now in the realms of science, as this is the purview of the Universities and their researchers.  This makes it very easy to fool people.  Make your false statements sound like actual science, and most people will assume it is.  It gives the backwards troglodyte religious-fundamentalist “humans’ among us a lot of joy to keep everyone ignorant.  If they are dumb as rocks, it makes it easy to feed them the lies that keep religions rich.  Believe me, all the religious leaders at the top KNOW their followers are blind idiots, sucking up whatever ”theology” the leaders wish to make the sheep believe.  They sit in their massive, lavish, extravagantly outfitted homes and offices and laugh and laugh and laugh….

So, Mr. Dalrymple goes into great length to describe every aspect of how we know the ages of things.  He details what radioactivity is, what a “half-life” is, the methods used to test radioactivity, how they function, how we know they function, and what type of radiocarbon dating is good for what type of rock.  Each chapter then explains in exhaustive detail, sufficient for a learned expert, but still graspable by the lay reader, topics such as the age of the Earth based on modern geophysics and geology, the age of our Moon based on the rocks that humans have brought back, and then the age of the Universe itself, focusing on the data gathered from meteorites and interstellar debris we have collected.  In the hands of an educated person, this book could wholly rebuff any asshole trying to use make-believe fairy tales to keep young students ignorant.  This fight never ends, for ignorant fundamentalists will never change their mind, and they will go on indoctrinating their poor children in their backwards, regressive, baseless beliefs.

The greatest aspect of science, and most scientists, is that they willingly accept the vast quantities of unknown information, without suffering from desperation.  Scientists understand that unexpected answers may point to new truth, a new area of study, or they may point to an old false belief, correcting what could be centuries of ill-informed assumptions.  The last chapter of this book details the many things we do not yet know about the age of the Earth and the Universe, much to its credit.  Scientists are always willing to concede what they do NOT know. The greatest fault in religious fundamentalists lies in that they assume without question that everything in the parts of the holy book they like are invariably and divinely true, and anything else is false.  They are so brainwashed that the world “gospel” in English has come to mean undisputed, unvarnished truth. So pathetic. Every single person that seeks to curtail a young child’s learning or that seeks to teach them patently erroneous fantasy instead of accepted scientific fact should be fought against vigorously.  It is wonderful that Mr. Dalrymple has provided at least one excellent weapon against these morons.

(This book can be purchased here:  THE AGE OF THE EARTH  )
Posted by Rob Instigator