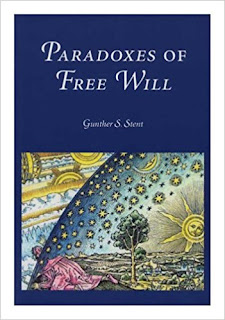 One of the biggest difficulties I have in reading works of philosophy is the nearly universal occurrence that philosophers critically analyze and explore an idea as far as they can, but seemingly fail to analyze and explore the assumptions they personally hold to be Truth.   Many philosophical works are actually re-phrasing and analysis of previous works, with what amounts to essentially a pamphlets-worth of data placed at the end of the book, detailing the writer’s tiny contribution.  I am not fond of reading those.  The glorious thing about Mr. Gunther Stent’s bad-ass book, Paradoxes of Free Will, is that it seeks to explore just one topic, and does so following the chronological history of human philosophical development.

The topic at hand is one that each of us should have an opinion on, regardless of our educational level.  This topic is Free Will.  Going back thousands and thousands of years, Mr. Stent finds that the central issue to much religious/theological thought is the attempt to understand what humans perceive as Free Will.  Very ancient human civilizations did not have a concept of an individual free will.  Even until the time of Confucius, Lao Tze and the Buddha, the world these genius thinkers came from did not place any value on the individual or the individual’s right to decide the path of their life.  Confucius created a means by which society can guarantee good upstanding members, to the exclusion of actual individual desires.  Lao Tze tried to do the same, but with the goal of showing the people how to guarantee a good moral life, as opposed to a social life.  The idea of human Free Will really began to take shape after humanity crafted monotheistic religions.  Polytheistic religions posited that we humans were just parts of a much greater, eternal whole.  Monotheistic religions had to create some sort of special reason why humans are so “awesome,” so they began to perceive the entire material world as being created solely for humans (stupid, but what can you do?)

The main argument between theologians, philosophers, and other thinkers goes like this.  If the Universe is created by an all-knowing, all-powerful, infallible creator being, and that creator being knows all that has come and will come, then why do humans feel like they are freely choosing their own paths in life?  If it is all pre-ordained, then to blame a human for a wrong action or an immoral choice is to blame the designs of an almighty god.  On the other hand, if humans have the ability to choose their actions for themselves, does that not deny the existence of an omnipotent creator?  This argument is further inflamed by the claim that some sort of pre-existing morality exists in humans, by which we are tested.  If we do good actions (god’s will) then we are good moral beings.  If we choose to do bad actions, we do so in spite of the morality we all know is in us.  At least that is one argument, and I have severely simplified it here.

The book shows the early development of human thought on these matters.  From the idea of a Free Will comes the idea of a Soul.  From the idea of a Soul comes the battle to determine whether the soul is a part of our material existence (a result purely of biomechanical processes) or whether we have a duality in us, base matter being our physical self, and a divine, ever-lasting Soul which guides our true self.  This is called the Mind-Body Problem.  Does the mind/soul exist independently from the body/brain?  Is it all just the end-result of pure physical properties?  Many wars and terrors and traumas have been shoved down people’s throats by those who wish to force their ideas about this on the people at large.

The existence (as most of us see it) of Free Will invites many other philosophical paradoxes that are explored in this great book.  One of the oldest is the Paradox of Moral Responsibility.  This can be explained in the following manner:

1)    Some of the world’s events are governed by determinism (the web of causation that we feel directly effects outcomes, such as a drought causing a forest fire).  All other events are random chance.
2)    People are only morally responsible for the action they will autonomously (many will say a person who is under orders to do an immoral act is NOT morally responsible, for instance.  A murder is an autonomous killing.  A soldier firing at an enemy is just following an order.)
3)    To the extent that a being performs an action is governed by determinism, it is predetermined.  Therefore people could not have chosen to exercise their free will in any other way from how they did do it.  The problem is that item one shows that if the action was not caused directly by another force, then it happened purely by chance, meaning no Free Will was involved at all.
4)    The conclusion of this argument is that a being is never morally responsible for their actions.  This for many is an obvious paradox.  How can an evil person not be morally responsible for their actions?

Now, while that may sound nice and pat, it has been shot down countless times by other philosophers, who can all find ways that actions are morally valid or invalid, regardless of determinism or random chance.  For instance, some would argue that a soldier ordered to shoot someone does not have to actually shoot them.  They could reject the order or shoot in another direction, and in doing so could choose the moral path.  It is very complex.

This book goes on to discuss scientific and religious developments that have shaped the various paradoxes that arise from the very idea of Free Will, with the quantum indeterminacy of the nano world being one of the latest to shock the status quo of philosophy as it relates to mind/body and free will.  I am glad I ran into this book at the Library.  It is a great exploration of a very specific and very central topic in the world of philosophy.

(This book can be read here:  PARADOXES OF FREE WILL  )
Posted by Rob Instigator