Soft Matter, Hard Science, and How to Teach It 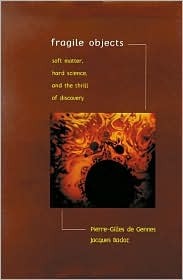 It is rare that a book starts off due to a great idea and then the author is able to match it with the actual content found within.  That is what I have found in this great and highly informative book by the French scientist and educator, Pierre Gille de Dennes.  Because of his involvement in education he was asked to speak to the advanced science classes at many French secondary schools regarding science itself, the pursuit of a career in science, and the methods by which science is best elucidated and taught to students.  Before writing this book, Mr. Gilles de Gennes visited and spoke at over 150 different French schools, both on the continent and in various French-system schools throughout the world.  He sought to teach the students about his field, the study of soft matter and its properties, but wound up learning just as much from the questions posed to him by the many students he met along the way.

This book is constructed in this manner, where the author discusses a specific science story that illustrates a point he is making about the properties of a soft matter such as rubber, then he details certain audience responses and/or questions that came up often during his trips.  He first describes what he studies, which are long, chain molecules called polymers.  Polymers are naturally all around us, from the keratin in our fingernails and hair, to the collagen in our ligaments and skin, to the snot created by our mucus glands.  The author focuses on one type per chapter. In the first chapter, he tells the students how the native people of South America would use a certain tree’s latex to coat their feet and ankles.  After an hour or so, this liquid latex turned into a solid material, natural rubber.  The native people did not know why this occurred, or why, after about a day, their rubber coatings would begin to fall apart and become unusable.  He then explains to the students that the latex combined with the free oxygen in our atmosphere.  These oxygen atoms would bond with the latex at various points and change the properties of the latex from a liquid to those of a solid.  The reason that the rubber “boots” would disintegrate is that nothing stopped the oxygen from continuing its reactions, so eventually so many oxygen atoms bond with the latex that the bonds between the latex are broken, causing the disintegration of the natural rubber.  It was not until Mr. Goodyear experimented with adding trace amounts of sulfur to cooking latex that an actually durable rubber was created.  We call this vulcanized rubber, because of the added sulfur, and it is still in use in every single vehicle tire around, not to mention a host of other uses.

While this is a neat story in and of itself, the author seeks to also prod the students into pursuing their ideas by describing how it took another hundred plus years after Mr. Goodyear vulcanized rubber, to actually begin to understand the physical and chemical reasons for the valuable reaction.  Why did not one seek to follow up on it?  Who knows, but it is the spirit of curiosity that is most alive in those that seek to become scientists.

Other chapters deal with soft matter such as soap bubbles, liquid crystals, wetting and de-wetting, India ink, and many other of the everyday items around us that are touched by the science of “soft matter.”  For instance, one of the interesting things is that a minute quantity of a substance can greatly change the properties of something else.  Ink, for instance.  Most ink is just minute particles of carbon floating in water.  The issue with keeping ink for any length of time is that the particles will all coalesce and sink to the bottom of the container, essentially separating the two components of the ink.  Back in human history, someone figured out that a tiny amount of gum Arabic (sap from a Mediterranean tree) added to the ink kept it from separating and would last over a year.  This is what we call India ink.  The addition of Gum Arabic helped coat each of the individual carbon particles with a one atom thick layer of gum, keeping the particles from collecting and settling down to the bottom.  Now, it took hundreds of years for someone to figure out WHY it worked (in terms of physics), but it is amazing that it was actually discovered!

The author also describes his personal scientific quest, as he proceeded to leave behind scientific disciplines in favor of new fields ripe for exploration.  Sometimes it is the only option for a scientist.  Certain fields stagnate, whether due to lack of funding or due to a bottleneck in technological ability.  The author went from studying surfactants (molecules with two separate ends each with different chemical properties) which are used throughout human industry, the most familiar ones being the varieties of soaps we have access to, to studying adhesives and their properties.  Each time he made a change he had to spend years learning the foundational ideas of the new field.  This is something that he made a very good point of sharing with his students.  It is very difficult to pick a new field of research and be successful in it.  It takes teamwork, patience, and the true love and desire to learn something new.  Many people, even top scientists, do not have such fortitude.

I would recommend this book to any secondary school educators out there, for it is a great study and critique of the methods used in the author’s home of France to teach children.  He describes the French over-reliance on teaching theory as opposed to practical applied science and engineering.  He describes the triumphs and challenges faced by American school systems and the methods used to foster academic excellence in the USA.  It is all very interesting and will give me much to think about for a long time to come.

(This book is available for purchase here: FRAGILE OBJECTS )
Posted by Rob Instigator