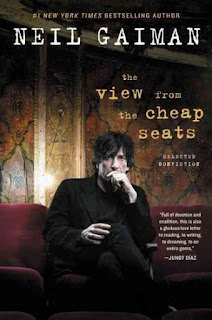 The View from the Cheap Seats: Selected Nonfiction – Neil Gaiman (2016)

I love this type of book.  Any volume that collects together the non-fiction writing of an author whose fiction work I love is mandatory reading for me.  It allows me to learn about the person behind the stories.  Neil Gaiman is a master of stories, mainly the type that people categorize as fantasy/horror.  However, those categories do not do his work justice as he is always looking for truth, something that many readers quickly dismiss as unavailable in genre fiction.  (I hate when people say this.  There is truth to be found in all things, even outright lies.)  This book is an excellent resource for anyone who has wished to hold a long conversation with Neil Gaiman, but never had the opportunity, for you will hear his thoughts coming to you from his true voice, not a character or a narrator.  Books such as this one are like finally meeting a person you have admired and appreciated for years and years, and then finding out that the person is even more interesting than you could ever have imagined.
Neil Gaiman started out as a journalist.  He then branched out into comic book writing and fiction writing.  I say “branched out” as if he just began to work in a new field, but what Neil Gaiman actually did was to change the face of comic books in our world, to reinvigorate the fictional exploration of myth and legend, to craft a cohesive world the likes of which Lovecraft, Poe, or Douglas Adams would be proud to have created.  His Sandman comic book series may be the best fictional exploration of humanity’s legends ever, and serves up as much truth and insight as any of Joseph Campbell’s scholastic works, all the while delivering deeply engrossing stories.  His novels continued in this vein and are just as amazingly thrilling and evocative.  His writing was never intended to be esoteric, although his topics always seem to be.  He writes with an ease of communication that makes the reader forget that she is experiencing something of great magnitude and deep wisdom.
This book is divided up into separate parts.  Some collect the various speeches and introductions that Neil Gaiman has given at conventions, seminars, or workshops.  Other sections deal solely with the many intros he has written for books he loves or books of friend’s he admires.  One part compiles writings that deal only with music and musicians. Another deals with individual books or authors he has interviewed or worked with.  It is a grab-bag, but the best kind of grab-bag, especially for someone like me who loves information for information’s sake.  I was familiar with many of the works and authors he discusses, but I have found several that I was unaware of, either because they were not popular in America, or because they have been forgotten in time.
I love seeing what is important to my favorite authors.  One of my greatest reading joys as a young teenager was reading Danse Macabre, Stephen King’s non-fiction collection of essays about horror, horror literature and film, and the art of writing such horror.  This was also a seminal book for Neil Gaiman himself!  I read and re-read it, always finding new insight and ideas.  Some of my favorite books by Kurt Vonnegut are also collections of non-fiction writing.  It is more direct.  The idea is expounded upon without the need for the framework of story.  I love story, but I love ideas more.
It is a very rare thing to get to meet your idols or your heroes.  Some people advise against it, for you will most certainly be disappointed in what you find.  Books like this one make it a pleasure to meet one’s idol!  It fills in details that normal writer’s bio pages do not cover.  This book helped me understand Neil Gaiman’s childhood, his obsession with reading and libraries (something else we share in common), and his endless intellectual curiosity, even if that curiosity took him to places his mind was not yet prepared for as a child. The same thing happened to me.  We are all much more alike than we are different.  This is something that is implicit in much of Neil Gaiman’s work.  It is another of the many truths that a lie like “fiction” can convey.  I am so glad someone gathered up these ephemeral bits.  Thanks for all the stories Neil.