Hans Reichenbach Uses Math to Show Us the Direction of Time 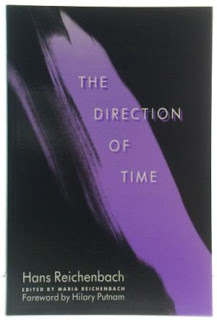 The Direction of Time – Hans Reichenbach (1956)

In the late part of the 18th century and the beginning of the 19th century, many philosophers saw their world crumble when their old, long-held assumptions about reality came crashing down around them, due mainly to the various advancements that occurred in physics during that time.  Einstein’s relativistic theories regarding the large-scale composition of our Universe, and quantum mechanics’ probabilistic theories regarding the small-scale composition of the fundamental particles creating our existence did not allow for the old stand-bys of philosophy.  A Priori ideas were discarded.  Previously believed truths about our reality that were simply accepted as fact because Plato said so were understood to be false.  The understanding that any philosophical theory needed to support and not contradict the verifiable, empirical facts of the world of science was required.  In this tumult, philosophers such as Bertrand Russell sough to unify the empirical results of science with the aims of philosophy, helping create what is now called “scientific philosophy.”

Hans Reichenbach was at the forefront of this movement.  He understood early on that the world as described by the then-current physics was not one that could be easily codified into philosophical terms and concepts.  A new philosophy was needed, and Reichenbach sought to provide that for the world.  One of his final attempts at this unification came in the form of this book, The Direction of Time, which explores how science and philosophy merge to describe the way that humans experience what we call time.

Time is a concept that many people misunderstand.  People assume that time is a purely linear function, equally applicable to the entire universe as it is to an individual, while others believe that time is relativistic, that each person experiences a different flow of time from anyone else.  Reichenbach begins his discussion of time by exploring what time means and what it has meant to philosophers of the past.  He explains the basic mathematics that show how our Universe is in a constant state of becoming from the past to the present, and how these mathematics show that time is irreversible, even though our minds can imagine such time reversals.  In our reality, time moves forward in all respects, with the future defined as that which has yet to occur but is influenced by the past and present, while the past is defined as occurrences which cannot be changed once they happen, but which will influence future events indefinitely.

In order to explain his reasoning, Reichenbach goes into levels of math that are frankly beyond my cognition.  I have to admit that I never got past Algebra II, or Pre-Calculus in school.  As a Fine Arts student I satisfied my math requirements with Logic classes.  Thankfully, those same Logic classes help me keep Reichenbach’s thought processes in clear focus, even though his mathematical specificity leaves me in the dust.  I wish I had more ability to process Logarithms!  The beauty of knowing mathematics, even on a level such as myself, is that, while I may not understand the full import of a formula, I can follow the thought processes as one formula is permutated into another, or as it is simplified by the author.  This does help a lot in understanding this book.

Reichenbach seems to come to the conclusion that time and the measurement of time are probabilistic processes, which require the understanding of thermodynamics, entropy, and macrostatistics as they relate to microstatistics.  Probability is a lot different in the macro world of our Universe than it is in the micro world of our subatomic particles.  Yet, they both point to an inexorable direction of time.  They both show, mathematically, that time is a process that moves in only one direction.  This is far more important and valid that the old Greek assumptions that everyone took for granted as gospel truth.  While I wish I had more of a grasp on high end mathematics, I am very glad I forged on and finished this book.  I hope to return to it one day in the future once I have increased my math skills.  It is amazing to see the basis for our current scientific philosophers.


(This book can be purchased here: Dover Books )
Posted by Rob Instigator