Quantum Gravity, and the history of human exploration into the nature of our Universe 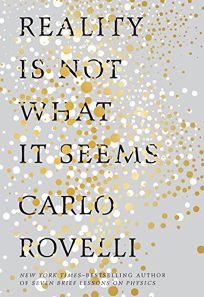 Reality is Not What It Seems: The Journey Into Quantum Gravity – Carlo Rovelli (2014)

Around a year ago I read and reviewed another book by the Italian physicist Carlo Rovelli.  (Click Here for that Review) That book was a detailed history of the man known as Anaximander, of whom I wrote that he is “the earliest human that we have record of who helped create the logical and rational framework that set the stage for the scientific revolution all humans have experienced over the past 250 years.”  At the time I bemoaned my inability to read his then-current book Reality is Not What It Seems.  Thank goodness for the good folks at the M.D. Anderson Library of the University of Houston.  They acquired the English translation and this is what I managed to stumble across during my browsing.

Where to start?  This book is an attempt by Mr. Rovelli to discuss the history of our collective efforts to understand what constitutes the fabric of Reality, the elementary nature of our selves and everything that exists.  Beginning with Anaximander, Plato, and Aristotle, Mr. Rovelli describes how each of these ancient geniuses grappled with the substance of reality, and with the ability and limits of the human to comprehend this reality.  He details the amazing and near-miraculous insights from these men that propelled our entire world forward in the quest to understand. Leuccipus and Democritus formed the basis of “atomist” theory, purely through rigorous analytical thought, understanding that all matter is composed of small indivisible parts. Democritus alone was such an amazing thinker.  It is a shame most of his massive output has been lost to history.

After the initial period of discovery, once monotheistic religions took over the human landscape, progress was effectively halted, and the knowledge of our forefathers was lost in the Western World.  Scientific fact was replaced by dogma and blind faith in the make-believe magic stories of priests and the governments which aligned themselves with religions.  It was after nearly a thousand years of barbaric ignorance that travelers and scholars visited India and brought back the wisdom of the ancient Greeks, knowledge which was critical to creating the modern world we all share.  From this influx of ancient wisdom and science, someone like Isaac Newton was able to understand and explain what he saw as the structure of the Universe.  Newton saw a fiercely deterministic static Universe.  His laws of motion and his invention of the Calculus allowed humans to plot star and planet trajectories centuries in advance, and his mathematics and science helped the Western world shake free of its religion-induced intellectual coma.

The world as Newton saw it was un-changing, and infinite.  Scientists continued to study the Universe, finding and creating new tools with which to explore.  In the early 1900’s, Albert Einstein proceeded to shake the world to its core, much like Newton had done before.  Einstein understood that there is no static Universe and that everything is constantly in motion relative to everything else.  He was the first human to grasp that time is not a specific thing, existing separate from the Universe.  He saw that we live in an ever-expanding Present.  Einstein also saw that the world is not what Newton stated.  There is no matter and energy floating in empty space.  There is just matter and energy existing in space-time and gravity is merely the deformation of this space-time by massive objects.  All of these things have been verified countless times.

What Einstein did for the world at large, quantum mechanics did for the world of the very small.  It is an extremely successful theory and its predictions have been validated countless times as well.  Quantum Mechanics shows us that the world is made up of quantum objects, which have probabilistic traits.  One cannot know everything about a proton, unlike in Newton’s time, when it was assumed that this was possible.  This indeterminacy has been proven to exist throughout the Universe at all quantum levels.

All of this leads into the discussion of Quantum Gravity.  Einstein’s Relativity and quantum Mechanics work together in most ways, but in special cases, such as black holes, or singularities, both theories fall apart.  Gravity can only be calculated in the macro sense, and quantum effects never give definite answers.  To combine these two theories is the current goal of theoretical physicists around the world.  Some have been working on String Theory, which predicts the existence of super-symmetric particles.  These particles have not been seen in experiments at particle colliders.  This lends more weight to Rovelli’s field, which is studying Loop Quantum Gravity, which seeks to study the constituents of gravity, or the quanta of gravity.

Light acts as a wave and a particle.  The quanta of light is the Photon.  Gravity seems to act as both a wave and a particle, gravitational waves having been detected as recently as 2016.  Loop Quantum Gravity postulates that the smallest quanta of gravity are actually small closed “loops” as opposed to points.  He goes into a great explanation of his research and of the ways that scientists have arrived at this idea, one which seems to be more promising that String Theory. What a great book.  The Bibliography at the back will keep me happy for a while too.  I wish I could better describe how much is contained within this awesome book,  but you will have to read it for yourself.

(This book is available for purchase here: REALITY IS NOT WHAT IT SEEMS )
Posted by Rob Instigator