Anaximander is my Newest Hero 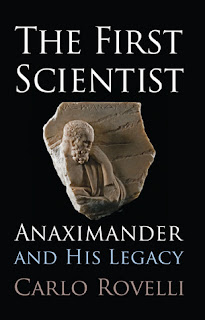 The First Scientist: Anaximander and his Legacy – Carlo Rovelli (2011)


In my never-ending search for new reading material I came across the name Carlo Rovelli, a theoretical physicist who wrote a book intriguingly titled “Reality is Not What It Seems.”  That book is about the development of quantum gravity theories.  I wanted to read it badly, but could not find a copy at my Library of choice (I am still on the hunt!  Soon!).  What I did find available was a book by Rovelli about the Greek philosopher Anaximander, a man whose ideas about us and the natural world around us were so advanced for their time that they were quickly discarded in favor of the same old status-quo.  People like to throw out the old statement that there is nothing new under the sun, usually to bemoan the lack of originality evident in some artwork or research or idea.  This is a falsehood.  There truly ARE new ideas, never before thought or spoken.  Anaximander was the earliest human that we have record of who helped create the logical and rational framework that set the stage for the scientific revolution all humans have experienced over the past 250 years.


Rovelli does a fabulous job of explaining the radical difference between the worldviews that all humans lived under before Anaximander (The Earth is below, the Heavens above. All is put into motion by the will of gods.  Everything has been the way it is now since the beginning of time, etc.), and the general worldview that most of us modern humans live in, (The Earth is not the center of the Universe. The Universe is exceedingly old. Rain clouds form after water evaporates and climbs into the atmosphere. Land animals evolved from sea animals, etc.)  He explains how big a conceptual leap it was to go from the standard beliefs of the time, beliefs which persisted through all human cultures ever studied, to the core idea that pushes scientific thinking and study.


This core idea is a very critical thing, and it is something that many people do not grasp.  In essence, it is this: Nothing can be learned from certainty, especially certainty blindly accepted without analysis.  Certainty only leads to ignorance.  Before Anaximander, most people who wished to study under a master had to wholly accept that master’s wisdom and teachings without question.  They were assumed to be infallible, due to their prestige, age, or perceived wisdom.  This does not allow for knowledge to expand.  Blind allegiance to “certainty” negates critical thinking.  The ancient sage Thales was Anaximander’s “master.”  What Anaximander did that changed the course of human history is to absorb and understand everything his master had written, and then to LOOK FOR THE MISTAKES.  Anaximander assumed, rightly, that humans are not infallible, and that new knowledge and wisdom is to be found by asking questions of those that came before.  Each new answer creates new questions.  Nothing is absolutely certain in science.  It is only as good as the current data and experiences we use to create our scientific theories.  This idea is the germ of all scientific and rational thinking about the world around us.


Critics of science and scientific thinking despise this uncertainty.  They value the certainty their religion gives them.  Unchanging, unthinking certainty is an evil.  They claim that because Isaac Newton overturned the Ptolemaic idea of the Universe then Ptolemy must have been completely wrong.  Also, since Albert Einstein and his General Relativity overturned the Newtonian idea of the Universe, therefore Newton’s ideas must be completely wrong, according to these people.  Science does not work that way.  The genius of Newton is that his theories on gravity and the Universe and matter and energy were and are correct for 99.99% of the natural world we see around us.  Einstein absorbed this, understood this, and sought out the tiny areas where he felt the great genius Newton was incorrect or lacking information, and proceeded to flesh out those areas.   Newton assumed certain things about our Universe.  Einstein showed these things to be false, and because of his work, was able to understand the relativity of location, the curvature of space time, the “speed limit” set by light, etc.  These were concepts that Newton had no way to understand, but which Einstein, by building on Newton’s work, managed to ingeniously create.


Einstein was not 100% correct either.  NO ONE IS.  Anyone that tells you is either a liar out to steal from you or use you in some way, or they are deluded morons, trying to make you live in their blindly ignorant and simple worldview.  Either way, they are enemies of rational thought, of rational and human exploration of the world around us.  We, as a human race, owe Anaximander for this conceptual leap.  We owe him big time.
Anaximander lived around 600 BC.  That is a little under 3,000 years ago.  He was able to deduce through observation and rigorous thought, that Zeus does not cause the rain but that it is caused by water evaporating from the Earth, heated by the Sun, with no need for any supernatural intervention.  He understood that the Earth was a solid mass, floating in the nothingness of space, with the “heavens” in all directions.  He understood that the first land animals must have come from the oceans, and that humans are descended, along with all creatures, from the sea.  He posited that the Universe was born out of chaos, that all that happened afterwards was dictated not by the capricious will of some gods, but by natural laws.  Before Anaximander humanity was like a child, full of blind faith and certainty.  After Anaximander we have a world where a human can, by virtue of study and hard work, truly understand the causes and effects of the natural world around them, constantly building upon the knowledge of previous humans, and correcting any errors along the way.  This is the true genius of humans.  It is so sad to see that nearly three thousand years later, so much of the world is still obsessed with their religious and philosophical certainties, and willfully ignorant of the uncertain truths that science and logical thinking can provide us.

(This great book can be purchased here:  https://www.amazon.com/Anaximander-Carlo-Rovelli/dp/159416262X )
Posted by Rob Instigator