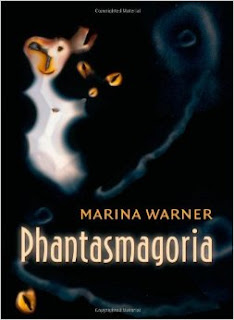 As an artist, I have always been interested in the way we humans perceive the world around us.  Most people take it for granted that what they see, hear, touch, etc. is corporeally real.  They assume that our brains are just receptacles, containers for the input our senses provide.  This is a very limited view of our minds.  Every single one of us is living in a world that exists solely in our minds, filtered by our personal experiences, beliefs, and prejudices.  Where some people see images in clouds, others never bother to look at all.  Our human culture, literature, and especially religion, has been reading into the visions of the mind since before we have record of it.  Marina Warner explores the many different ways that humans have tried to visualize the ephemeral.
One thing that Ms. Warner does so well is to combine what appears to be a shit-ton of research and information into a concise accounting.  Each chapter describes human’s explorations into the meaning of ephemeral visions, such as clouds, shadows, fata morgana, mirror images, etc., from ancient times to the modern day.   This makes the book a very valuable resource from which to find other material that further explores the topics at hand.
There is one big problem though.  I read such books to encounter new analysis and new insights into these subjects, as I am already well-versed with all these topics through my own personal research and reading.  This book does not have such analysis or thought.  After a few chapters it begins to read like a thesis by a graduate student, one that contains too many examples and too little substance.  Too many examples are cited with no context, just to pad out some of the thin chapters.  That is a shame.  I think a wonderful book could be written using this material, if it was more carefully edited and if it included more original insight.

(This book can be purchased here: https://www.amazon.com/Phantasmagoria-Visions-Metaphors-Twenty-first-Century/dp/0199299943 )
Posted by Rob Instigator