Schopenhauer, where have you been all my life? 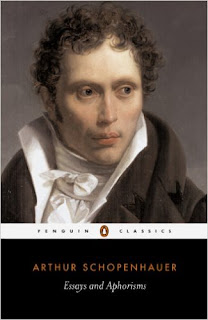 Philosophy, as a field of study, is fascinating to me.  Ideally, it is pure thought/reasoning, utilized to explore and understand ourselves, the world around us, and the workings of existence, providing answers that empirical data cannot.  This is the purported goal of philosophy, yet too many philosophers undercut themselves right off the bat by assuming certain basic truths to be unquestionable, and proceeding to extract their philosophical thought from this basis.  This error results in whole streams of thought that are easily discounted by anyone who does not assume their initial postulates are verboten.  It also makes it very easy to justify horrible things, such as the subjugation of women, the superiority/inferiority of this or that race or people, or the idea that the state of being alive is a punishment meted out by a vengeful creator deity and which, if we suffer through the horror with dignity and the proper rituals/beliefs we will be rewarded with everlasting joy and happiness once we die.  Schopenhauer was the first philosopher to start off his work without the crutch of pre-existing, non-verifiable beliefs, and man, does it make for extremely interesting reading!
I feel that the field of philosophy is one where the individual great thinkers should be studied, not for the truth they uncovered about the world, but for how they saw the world they inhabited.  Too many pedantic people get fixated on one philosopher whose ideas about existence so mirror their own ideas that other philosophers are neglected.  This is the sign of a closed, simple mind, one that cannot comprehend that it is in their best interest to read widely,  think deeply, and then to come up with their personal ideas about existence.  This is the best way to read philosophy.  It is a map to human thought, not a set of rules to live by.
I had heard the name Schopenhauer mentioned in much of my reading over the last 20 years.  Many of the writers I admire see him as a crucial point in their own development.  In his life he wrote extensively but the book he published early on, his masterpiece The World As Will & Representation, is really the definitive statement of all of his extremely well-thought out ideas.  I will read that one day, but for an introduction I am glad I found this book which collects many different writings under various subject headings, such as religion, ethics, women, the arts, psychology, and writing itself.
Schopenhauer is described as an atheistic, philosophical pessimist.  This description is due to where Schopenhauer chose to begin his exploration of philosophy.  He did not start from the tenets that any specific religion’s ideas were a priori truth.  His philosophy was the first that took all of the recent scientific advancements for its basis, instead of the theological arguments that most philosophers use as a crutch when creating their thought.  Schopenhauer saw through the lies inherent in organized religion of any kind, and because of this, his philosophy is truly a humanist one.  The supernatural is never evoked as the cause of anything, nor as the redemption of anything.  This does not mean that he did not find beauty and value in the ethics and wisdom found in religious texts.  Not at all.  He was widely read on the Christian texts, Buddhists texts, and was the first major European philosopher to read and understand the value of the India Vedas, mythological tales which preceded most of the monotheistic religions by thousands of years.  He was a world thinker in the best sense, and understood the deep correlations between the Buddhist philosophies (Buddhism being an atheistic religion) and the Christian philosophies that Jesus preached in the New Testament.  He understood the warped desecration of these ideas by the organized church.
Some of the greatest writers and artists are ignored in their lifetime and only praised and championed once enough time has passed to allow the indignation to die down and the work to be seen honestly for what it is.  The list of greats that were directly influenced by the philosophy of Schopenhauer reads like a who’s who of the greatest minds of the last 150 years.  These include Friedrich Nietzsche, Richard Wagner, Leo Tolstoy, Ludwig Wittgenstein, Erwin Schrödinger, Otto Rank, Gustav Mahler, Joseph Campbell, Albert Einstein, Carl Jung, Thomas Mann, Jorge Luis Borges, to name but a few.  I am so glad I finally dove into Schopenhauer’s world.  It is a world I will keep returning to and exploring my entire life.  I wish I could just quote endless passages from Essays & Aphorisms but perhaps a few will do.

On Ethics: “Every good human quality is related to a bad one into which it threatens to pass over: and every bad quality is similarly related to a good one. The reason we so often misunderstand people is that when we first make their acquaintance we mistake their bad qualities for the related good ones, or vice versa: thus a prudent man will seem cowardly, a thrifty one avaricious; or a spendthrift will seem liberal, a boor frank and straightforward, an impudent fellow full of noble self-confidence, and so on.”

On Philosophy and The Intellect: “If you want to earn the gratitude of your own age you must keep in step with it.  But if you do that you will produce nothing great.  If you have something great in view you must address yourself to posterity: only then, to be sure, you will probably remain unknown to your contemporaries; you will be like a man compelled to spend his life on a desert island and there toiling to erect a memorial so that future seafarers shall know he once existed.”

On Thinking For Yourself: “A truth that has merely been learnt adheres to us only as an artificial limb, a false tooth, a wax nose does, or at most like transplanted skin; but a truth won by thinking for ourself is like a natural limb: it alone truly belongs to us.  This is what determines the difference between a thinker and a mere scholar.”


(This book is available for purchase here:  AMAZON  )
Posted by Rob Instigator