I have always wanted to know everything 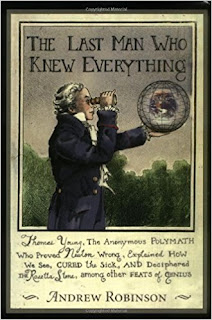 The Last Man Who Knew Everything: Thomas Young, the Anonymous Polymath Who Proved Newton Wrong, Explained How We See, Cured the Sick, and Deciphered the Rosetta Stone, Among Other Feats of Genius – Andrew Robinson (2006)

A Polymath is a person who through experience, study, and thought becomes highly educated in a wide and seemingly disparate variety of subjects.  The common term “Renaissance Man” implies polymathy, such as in the case of Leonardo DaVinci, who became a master painter, engineer, sculptor, and draughtsman, as well as being a very competent mathematician, botanist, anatomist, geologist, and astronomer, among countless other subjects.  His personal notebooks, held mainly by the Vatican in Rome, contain the basic fruits of a deeply fertile mind, one that was curious, flexible, and obsessive when it came to gathering knowledge.  The British physician, physicist, mathematician, linguist, and Egyptologist Thomas Young is another such genius.  He is not as famous as DaVinci, but that may be due to the fact that much of DaVinci’s well-known work is in the form of art, capable of being seen and understood by the whole of humanity.  Thomas Young’s work was more esoteric than DaVinci’s, and more critical to the future development of the various sciences affected by his genius.

This book is an awesome exploration of Thomas Young’s life, and of the way he went about his intellectual explorations.  It describes the manner by which he became a physician, and first explaining the method by which our eye adjusts the light entering it to project a focused image on our retina, something no one had been able to understand before.  It talks about how Thomas Young’s explorations into light and it’s properties helped explain what we now call “polarization” and finally proved conclusively that light/energy behaved as wave function, something which corrected a misconception by Isaac Newton.  Thomas Young learned to read and write in many ancient languages, and it was because of this interest that he was able to definitely prove that the hieroglyphic writing of the Egyptians was not just symbolic, but also sometimes phonetic, reaching a climax when he was first able to translate the writing on the Rosetta Stone, something that had stumped scientists and linguists since the stone was brought back to Europe by Napoleon several decades earlier.

When the Encyclopedia Britannica was first being put together, Thomas Young was asked to write some articles for it.  He penned over 66 different, highly researched and informative articles on subjects as varied as “Egypt”, “Bridges”, “Chromatics”, “Carpentry”, “Tides”, “Languages”, “Herculaneum”, and “Weights & Measures”, many of which are still standard texts studied by University students.  These were major surveys of the then-current state of knowledge in these fields, and in many of these articles Thomas Young actually contributed his own original ideas and work.  He wrote over 40 biographies for the encyclopedia, on men of science mainly.  As the author states, “Very few specialists nowadays would dare to attempt more than one, or at the most two, such major surveys for the Encyclopedia Britannica, even with the help of a co-author.”  Thomas Young did the research, and wrote the articles, all; while doing his other scientific explorations and lecturing at a University.  For the biographies of the scientists he would actually read (or re-read) all of their published work, so as to better aggregate the information for the encyclopedia.  This is a man who truly loved to learn, and whose mind could not only absorb the widest range of knowledge, but could re-arrange it and see new worlds and ideas to explore in that knowledge.

I am personally attracted to anyone whose willpower leads them to explore the different corners of their intellectual curiosity. These types of humans are usually derided by their contemporaries, mainly by denigrating their contributions to any specific field as being those of a “dilettante,” someone who is not serious enough to spend all their time focused solely on one field.  Thomas Young’s harshest critics were people who had labored for years on a subject, only to have Thomas Young come by and, with his deep learning and uncommon insight, propose correct and groundbreaking solutions to problems they had yet to even understand.  He made the so-called experts appear ignorant, or just second-rate.  This bias still exists.  Many experts will dismiss the ideas of someone who does not possess the exact same level of educational “achievement” as them, as if someone without an advanced degree could never possibly hope to contribute anything of value.  Fucking assholes all.  It takes the waters of time to wash away the prejudices and the biases and show the true geniuses for what they are.   The lowly minds, the second-rate intellects, are left in the dust along with their second-rate work.  The existence of men like Thomas Young only serves to shine a light on the vacuity of the “experts” and encourages any of us to explore what piques our curiosity, wherever that may lead.

(This book can be purchased here:  The Last Man Who Knew Everything  )
Posted by Rob Instigator