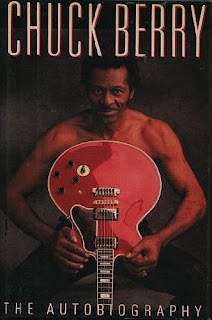 I am not a fan of biographies for the most part.  They tend to tell an individual’s story through rose-tinted glasses, and are usually meant as a quick cash grab to take advantage of notoriety of some sort of project the subject of the book is involved in.  My issue with most autobiographies is that the subject of the book very rarely actually writes the book.  What happens is a ghost-writer is brought into interview the book’s subject.  Sometimes they talk for days, discussing different events to include in the book, but a lot of the time the ghostwriter has maybe 6-8 hours of recorded interview with which to cobble together an “autobiography.”  Because of this, they usually suck hard and I avoid them.  Sometimes though, a particular autobiography piques my interest.
In reading about one of my favorite O.G. Rock n’ Roll heroes, Chuck Berry, I found that he had written his own autobiography, and thanks to the amazing M.D. Anderson Library at the University of Houston, I managed to check out a copy.  Chuck Berry is currently still kicking around, having released a blues album last year with his children as the band.  He is an octogenarian, and has lived through the fits and starts of rock n roll, through the worldwide fanfare for it all the way to its current day death throes.  It is amazing to think that in 2017, as I write this review, three of the main original heartbeats of Rock n’ Roll are still alive, in varying degrees of health.  The great Howler himself, Little Richard, is 80+ years old, and in failing health.  The Killer, Jerry Lee Lewis, still performs regularly slamming the hell out of those piano keys.  It is an awesome thing that all three of these cats survived the rock n roll life.
I have been drawn to the music of Chuck Berry, and to the man himself, since I can remember.  His compositions are classics, and many of them have been Rock n’ Roll standards since they were first released.  His stage-presence, charisma, and wild guitar skills made him seem like the ultimate rocker.  I had seen the great, if contentious, concert film that was put together in 1976 called Hail! Hail! Rock n’ Roll!  (It is awesome and you should check it out if you care anything at all about the history of rock music)  Because of all this I was immediately drawn into this book.  It really felt like I was visiting an old uncle and being regaled with the tales of his musical and personal life.  In fact, I could hear Chuck’s voice in my head as if it was a book-on-tape as I read.
There are parts of Chuck’s life that I did not know about and those make up the first third of the book.  His childhood, parents, friends, schooling, and everything that helped make him into such a rock star are covered, and in quite embarrassing detail sometimes.  Chuck describes the racial tensions of being a black musician from St. Louis asked to play “mixed” shows down in Dixie.  Everything from segregated hotels to roped off sections for whites only at the concerts, to having to sneak into an alley to grab food from a restaurant kitchen window to the incongruities between official segregation policies and the goodhearted and welcoming nature of southern people is covered.  If anything, Chuck has always been a cold-blooded realist, learning from every experience and trying to better himself at all turns.
Only in one chapter does Chuck discuss the songs that have made him a legend.  He details the construction and writing of these tracks and it is a very cool window into how a musician’s mind works as he creates his art.  Throughout the book he details other, less savory aspects of his life, such as his romantic affairs, his trouble with the law at various times in his life, and the three separate incarcerations he endured.  Life comes with its ups and downs and Chuck does discuss these things.  He never became a drug addict, or an alcoholic.  This may have helped keep him in shape for performing for the past 60 years.
Sometimes reading the words of one of your heroes can really deflate the admiration.  This was not the case with this book.  Chuck is Chuck is Chuck, and the world is better for having had him in it.  His seminal and auto-biographical composition, Johnny B. Goode, is included in the Voyager golden records sent along with the spacecraft on a journey outside of our Solar System.  Chuck Berry’s music could, conceivably, travel for millennia before some star-traveling civilization discovers it, and plays the record within.  It would be an amazing thing to have people rocking out to a tune that came to being due to Chuck Berry hearing his mother tell him countless times that “someday your name will be in lights.”  Hail! Hail! Rock n’ Roll indeed!
*****
(One of the stories that Chuck tells is about a nightclub which he refers to as "Jimmy Menutis' club on 3236 Telegraph Road, at the southern end of Houston."  This was actually on Telephone Road, not Telegraph, and was a famous joint for seeing all the rockers, jazz, blues, and boggie woogie stars back in the day. Here is a picture and a short story about that club https://bill37mccurdy.com/2010/08/05/jimmy-menutis-the-houston-heart-of-rock-n-roll/ )

(Chuck Berry was one of the first poetic lyricists in rock music, and influenced nearly everyone that came after, with all the heavyweights of the genre naming him as their idol, and rightfully so.  The Autobiography contains a few of Chuck's poems, and this one I particularly like:

(This book can be purchased here: AMAZON )
Posted by Rob Instigator