If Volume 1 is this unnerving, I cannot wait for the rest! 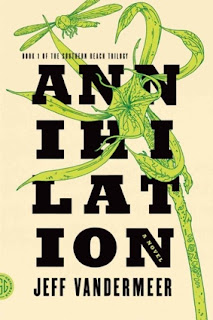 One of my people over at the Sonic Youth Gossip Forum and I were discussing weird books and he turned me on to this trilogy, which Severian stated was a cerebral horror/science fiction oddity that scrambled his brain and, if I so liked, I could let it scramble mine as well.  It is a fairly recent publication so I ran over to the campus library and checked out a hardback volume containing all three novels.  It is good to work near a high quality library!
I had never heard of this book series or the author, but I am always open to new weirdness.  This book did not disappoint.  What seems like a fairly straightforward exploratory science fiction tale quickly gets deeper into weird, dark corners.  In this first book of the trilogy, Annihilation, a botanist shares her story as she heads out with several other specifically chosen professionals to explore a wild and nearly mythical expanse known as Area X.  As the expedition arrives at their base-camp in Area X, the story reveals details about the protagonist’s life and her reasons for volunteering to join such a risky expedition.  We find out that her husband had gone on a similar expedition to Area X, and what returned from it was not exactly right.  The intense and lengthy preparations for this undertaking are also described, while we learn more and more about our protagonist’s prior relationships with her family, career, and husband.  As the story progresses it begins to take on a form of delirium, as if it is I, the reader, that is being mentally “annihilated.”  I wish I could describe the details more but I do not want to ruin anything for those that wish to read this weird and quietly disturbing book.
What is found in Area X and the situations that arise from these discoveries could have been treated as a simple, if bizarre, science fiction tale, but Vandermeer is more interested in exploring the effects such things have on one’s mind.  One of the scary aspects to me is that the discoveries and facts are not what become critical in this tale, but the suggestion of meanings behind the discoveries.  There is no omniscient narrator to explain things to the reader, and we are along for the ride, as if we sat in a corner of the protagonist’s mind and shared in everything she feels and experiences.  It really feels as if one is losing control, especially since none of the people in this book are given names.  That is one of the requirements for joining the expedition.  None of the participants was to know each others names.  They are referred to by their profession; botanist, psychologist, linguist, etc.  Giving things names helps us humans feel as if we are in control.  Too bad almost nothing in Area X can be named.  At one point the people discover a large structure that seems to go deep underground.  While the expedition takes to calling it a tunnel, our protagonist refers to it as a tower.  That may seem like a small thing but it touches on what we humans like to imagine as our shared consciousness.  It really does not exist.  One persons tunnel is another persons tower.  The world we live in is created in our own mind.  It is for us and us alone.
Some parts are so specific, so true to what relationships can be, that it feels as if the writer wrote them after examining me and my life for a few years!  That is a very odd feeling, and one I hope continues as I begin the second part of this trilogy which is titled Authority.  I hope I don’t go nuts!

(To read the first chapter of Annihilation, click here: http://io9.gizmodo.com/read-the-mesmerizing-first-chapter-of-jeff-vandermeers-1520682658 )