100 years ago a man wrote about the need for Noise Music! Amazing! 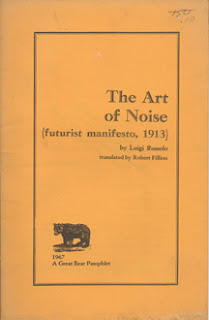 Noise.  My favorite band is Sonic Youth.  Once, while watching videos that I had taped on our family’s VHS recorder, my dad came by and sat with me to see what I was getting into.  I was around fourteen to fifteen years old at the time.  As soon as he sat down the video for Teenage Riot began to play.  This was, and is, my favorite song.  The aural content perfectly matched the static in my brain.  I rocked out to it while my dad sat there silently.  As soon as it finished, with me exhausted from “rockin’ out,” my dad turned to me and said, “It’s just noise.”  I replied that yes, it was, and it was my favorite noise.
I have always enjoyed dissonance in music.  I find white noise very soothing, and have a noise machine that I run all night which helps me sleep like the dead.  I like repetitive noises, such as those of motors or machinery, and I find odd rhythms within those noises.  To this day, “normal,” tuneful, pleasing-to-the-ear songs and music leave me cold.  I prefer my music with a jagged edge I guess.
While studying Art History I read a lot about the Futurist movement and heard mention of a manifesto titled The Art of Noise.  I knew of the weird band that shared that name and once I read this work it made perfect sense why they called themselves The Art of Noise.  In 1913 the world had been in the thick what is now called the Industrial Revolution, as well as nearing ever closer to the War to End All Wars (WWI) which began a year later.  Philosophers and artists, as usual, were at the forefront of everything, and could sense that the worlds that the Arts had drawn from, the seemingly simple world of Nature and God and the Natural Order, had been bypassed by us humans.  We were now remaking the world.  The simple definitions which once held saw over the art world and the music world no longer seemed relevant.  They would seem even less relevant after the ensuing decades of war, strife, and horror that culminated with the United States dropping the two biggest bombs ever used in war on Japan.  The Futurists were artists and musicians that sought to explore this new world through new art and new methods of creating art.
Sensing all of this, Luigi Russolo wrote a letter to his friend, a Futurist composer and musician named Francesco Balilla Pratella.  This letter is what has come to be known as the manifesto The Art of Noise.  In it, Russolo describes how the development of our society has created a whole new wealth of sounds, sounds that are normally categorized as “noise,” and that the human ear has evolved to accept and enjoy these sounds.  He describes the development of music itself, from pleasing, naturally occurring sounds, to sounds created by humans purely for other human’s pleasure, to the utilization of this powerful new media by the religions of the world to somehow contain and take advantage of the power of the music to transport the mind to a different state of consciousness.  From there he describes how the formal rigidity of the Greek musical system did not allow for harmonies, leading to the harmony-less church chanting and music of the Middle Ages.   From there it was a matter of adding layers of complexity and invention to reach the musical heights of the masters like Bach or Beethoven
.
Even in 1913 Bach and Beethoven were considered by many to be old-fashioned music.  Russolo talks about how the human ear, having grown accustomed to the atonal, dissonant, and polyrhythmic nature of the sounds coming from the industrial machinery, increasingly found the old music to be aurally boring.  Even the classical composers who tried to inject the sounds of dissonance into their music could only go so far, having based their music on the normal tonal range expected by the instruments of an Orchestra.  Because of this, Russolo proposed to create new instruments which could convey the sounds/noises that were now integral to the human experience.  He saw the following categories as the “six families of noise:”

He sent this manifesto to his musician friend so he could use the ideas within to create a new music.  It is odd to think that his words essentially predicted the state of the most avant-garde of music since his time.  Between the sonically harsh works of masters like Schoenberg in the classical arena, the twisted and atonal Free Jazz of Ornette Coleman and Cecil Taylor, the drone-driven and atonal rock music of the Velvet Underground, the roaring avant-noise-rock of  Sonic Youth and Suicide, the walls of 30 minute slow drones and skronk from bands like Earth and Sunn-O, the furious and near-incomprehensible noise of bands like the Locust, and the mad, erratic glitch EDM of the past ten years or so, it seems that Russolo was right on the money.  The “normal” sounds of the typical music of the past sounds so quaint to modern ears.  It can still move the soul but it does not feel urgent or currently important.  Our ears continue to evolve and our sense of what is pleasurable grows and grows.  I am so glad I ran across this manifesto as it sheds light on the music I love, why I love it, and where it may be headed in the future.  Long live the Noise!