My Favorite Book is analyzed in critical essays. 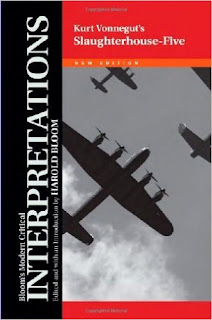 When asked what my favorite book is, I reply with “Slaughterhouse-Five” by Kurt Vonnegut.  I first read it as a teenager, looking for something I could relate to, and found inside its pages the very same sadness, bleak humor, and despairing optimism that runs through the mind of many intelligent, angry, and disaffected young people.  It was the first work of fiction I read that was explicitly drawn from real life (Vonnegut’s experiences as a soldier in WWII, surviving the firebombing of Dresden), and which sought to use humor to fight off the sense of impending doom that comes from even a cursory study of the many atrocities and horrors humans have willfully committed against the Earth, the animals, and the other human beings around us.
History is full of stories of military victory, and rarely mentions the brutal cost for both the winners and the vanquished.  Vonnegut knew history is a fabricated lie, and wrote this book to try and make sense of the nonsensical horrors of the world.  He waited twenty years after the firebombing of Dresden to write it, and he poured every bit of himself into it.  It is a complex work disguised as a comic science fiction tale.  Many people have written about it, and many have misunderstood it completely.
I have read critical works based upon Slaughterhouse-Five and many of them left me cold.  It seemed as if the writers did not understand that for all the bleakness, all the insistence by the protagonist, Billy Pilgrim, that the horrors and shitty times of life are all as everlasting as the great and good moments, and that as the Tralfamadorians say, you can choose to exist solely in the good moments while ignoring the bad, and the offhand way in which Vonnegut states after each death, “so it goes,” that Vonnegut himself is a fatalistic person, resigned to being “stuck in amber” as humans are described by the aliens Billy Pilgrim encounters.  This could not be further from the truth.
Vonnegut’s novel is not a call for fatalism, but a call for hope and kindness and ethical conduct in the face of overwhelming fatalism.  One of the essays in this book describes how Slaughterhouse-Five serves as the pinnacle of Kurt Vonnegut’s life-long war against impersonal technology, and the mind-set of the people in power who see technological advancement as an end in itself with no care for the trauma that the new tech will inevitably cause.  This is not what a man resigned to fate would choose to fight against.  Another essay focuses on how Vonnegut book-ends the novel with two chapters which discuss his own life, and the events that led him to write the book.  This is usually misinterpreted to mean that Billy Pilgrim is somehow a surrogate for Vonnegut, even though Vonnegut himself appears several times in the story as a peripheral character.  Yet another essay explores the themes in Slaughterhouse-Five that point to Vonnegut’s desire to have humanity demand that it’s leaders behave better, and that only those in power can actually bring out effective change.  The powerless suffer at the whims of the powerful, whether it is soldiers killing and dying in a foreign land for reasons they do not understand, tens of thousands of civilians dying because their town was decimated for no strategic purpose whatsoever, or because powerless humans seek refuge in mindless entertainment, of course provided by the powerful.

I have not read Slaughterhouse-Five in many years.  Reading these critical essays has made me appreciate the novel even more than I did before, and I will have to re-read it again soon.  Vonnegut was my first literary kindred spirit.  His humor and pathos and cynicism perfectly mirrored my own developing self, and because of that I read everything he ever released, from novels to short stories to his non-fiction works.  He never stopped hoping that the inherent goodness of humanity would win out over its greed.  Even in later works like Fates Worse Than Death, where the bleakness of the human condition seems to almost have crushed Vonnegut’s spirit, his humor brings him through.  Sometimes the world is so absurdly uncaring, sometimes humans are so ridiculously evil, that laughing in the face of it is our only recourse.  Laughter, Vonnegut seems to say, is humanity’s last stand against losing its collective sanity.  So it goes.
Posted by Rob Instigator