Philip K. Dick, a Mystic for our Modern Times. 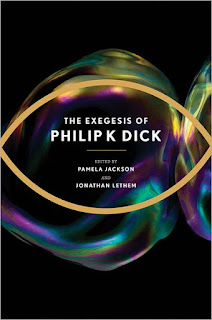 As a life-long science fiction reader, and avid follower of the nuttier, “fringe” sci-fi writers, I would hear the name of Philip K. Dick (PKD) spoken of in reverential tones.  He had died in 1982, soon after my family moved to the USA from Puerto Rico, and did not actually penetrate the mainstream culture until years later.  Because of that I did not get around to reading any of his works until I was in college, in the early 90’s.  At that time I had the good fortune of knowing other freaks who liked freaky books, and I began my dive into the world of Philip K. Dick.

It was easy to see why so many people idolized his work.  It was deeply inventive, highly cynical, and overflowing with insights and questions about topics which the standard sci-fi fare never bothered to analyze. PKD explored ideas about consciousness, what makes a person real, what makes thoughts real, what is the difference between thought and reality, and what can we truly know about the world around us when we have to filter it all through a very imperfect instrument (the human brain).  This was perfect for the Gen-X nihilists that found in PKD a sort of cultural prophet.  Here was a writer asking very deep and esoteric questions about the human experience without relying on the standard answers otherwise provided by religion, politics, and society at large.  He was a weirdo’s weirdo.  If Kurt Vonnegut was the caustic, depressed but funny grandfather of Gen X, then PKD was its warped, wasted, ranting uncle, disrupting all family gatherings with his inability to go along with the bullshit.

In-between February and March of 1974, PKD experienced a neurological/spiritual/pharmacological event that changed the course of his life from then until his death 8 years later. In one of the simpler re-tellings of this story, PKD went to his front door to answer a knock, encountered what would be described now as a “goth” girl standing there delivering something.  He fixated on her “Jesus fish” necklace and when he asked about it, she touched it and at that moment a pink laser light filled his whole sensory world.  This “light” spoke to PKD, shared inconceivably vast amounts of data in the forms of a sickeningly fast sequence of images flashed into his brain, and in every single respect scrambled him up pretty bad.  This experience, and several other similar ones that continued for the next 2 months or so, became the sole focus of his internal life until his death.

For a human being wired to instantly analyze and explore any new idea that came into his head, this event proved to be too much.  In the course of the next 8 years, PKD would repeatedly and exhaustively explore the event, the “knowledge” that was imbued in him, and the changes that this event brought to his mind in every way that a man like PKD could think of.  He analyzes it in letters to friends.  He discusses it from every possible angle.  He finds an answer, that answer is then negated, and another answer is found, eventually leading him to what is a maze of metaphysical thought.  PKD would sleep very little as he stayed up night after night, ingesting massive amounts of amphetamines in an attempt to stay awake and process what he experienced.  This led to over 8,000 mostly hand-written pages exploring the event of 2-3-1974.  (PKD always named the event 2-3-1974 as it happened between Feb-Mar of that year)

The human mind can explore a subject so deeply, that it becomes hard to tell if what is being thought is of any use.  It can quickly devolve into vicious logic circles.  For example, at one point PKD thinks that what happened must have been the “soul” of a former friend, a Reverend Pike, who came back to impart knowledge to PKD.  This is explored for possible correlations until PKD realizes that even though Reverend Pike knew Latin (some of the messages “beamed” into PKD were in Latin, a language that PKD never knew), he never knew ancient Greek, and some of the “messages” PKD received were in ancient Coptic Greek.  This led him to thinking that perhaps he had somehow connected with a re-incarnated Greek deity who had also happened to have incarnated as his friend Rev. Pike.  It goes on and on.  PKD, no matter how he turns the problem around in his head, cannot come to a satisfactory answer.

Thank goodness some of PKD’s loyal fans and editors got around to working on those 8,000+ pages.  The Exegesis contains around 900 pages and it is hard to imagine how much more recursive and self-referential the other 7,100 pages must be like.  PKD was a man who loved to learn for learning’s sake, and because of this his head was as full as any library.  He brought all of his prior studies and reading to bear in his attempt to explore the events of 2-3-1974.  A simpler man may have latched on to the first somewhat satisfactory answer and lived the rest of their life thinking an alien from Sirius came to visit him, or that he had somehow tapped into what esoteric mystics have described as the “Book of Life,” which contains all the information that the universe has ever, and will ever create.  Not PKD.  Every conclusion he arrives at can be turned on its head, since it is just his own assumption.  This makes for a very engrossing, frustrating, yet intellectually arousing philosophical work. It was never meant to be published or shared.  It was a personal exploration into his own mind.

Not many people have the ability or the temerity to fully explore the truly life-altering events of their life.  Most of us just move on, trying to forget the strange stuff, and shuddering when the memory comes back at odd times.  Others change their entire lives and blindly follow what they feel is the true interpretation of what happened to them without questioning any deeper.  Philip K. Dick was willing to exhaust himself to understand his own experience.  That takes a lot of guts and a maniacal devotion to truth, even knowing that the final Truth will never be reached.  This is a kick-ass book, and I recommend it to anyone who has read PKD’s works and wants a deep glimpse into the mind behind them.  It is not an easy read.  It is not a clear and logical read.  It is however, one of the very few mystical explorations we have into a metaphysical event from a thinker of our modern times.  In time, I could see this Exegesis being codified and worked into a visionary treatise, much like the Prophets of the Old Testament.  It may all have been a hallucination brought on by a stroke, a vision brought on by too many drugs, or a genuine inter-dimensional communication, but the fact that it happened, and PKD chose not to ignore it, is amazing indeed.