There is nothing more fun that finding new writers to read! 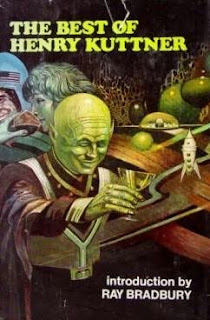 In my search for stories to read I tend to stick to certain genre fiction, mainly science fiction, because it merges my science obsession with my love of a good story.  Most of what I do read is not fiction however, and while I find it highly entertaining to flood my mind with data, sometimes I want to be transported to a whole new world and nothing does that better than a great science fiction tale.
Having read works by the sci-fi masters (my favorites being Asimov and Clarke) I soon progressed to the stories from the cyberpunk era.  In that sub-genre I loved Greg Bear and Rudy Rucker most of all, (the supposed master of cyberpunk, William Gibson, I find tedious and dull).  While exploring the writers that these cyberpunk authors admired I would come across names that have been forgotten by mainstream science fiction over the years.  One of these is Alfred Bester who I have reviewed before, and another is Henry Kuttner.  I had never heard of Mr. Kuttner before, as he had passed away decades before I was born.
Kuttner wrote novels and short stories.  Reading these stories today is a great reminder of how we tend to wrongly assign a generic literary “voice” to writers from a particular era.  Kuttner’s stories do not fit in line with the mainstream sci-fi of the 40’s and 50’s.  They are brash, witty, and irreverent in a manner that seems much more in line with the cyberpunk authors I mentioned earlier.  While his work is not as directly comedic as someone like Terry Pratchett, it contains much more humor and verve than the “Hard” sci-fi that was in vogue at the time.

In the introduction to this volume, Ray Bradbury (one of the “great” sci-fi writers who I also happen to find interminably boring) describes the pure inventiveness of Henry Kuttner and how he never wrote for a specific genre.  His works were pure imaginative fiction and in many ways stepped outside the bounds of traditional science fiction writing.  I do love any writer/musician/artist that is deemed “un-classifiable.”  That to me is a sign of an exploratory mind.  It is indeed a shame that Mr. Kuttner died so young, aged 42 years, and that the world was not granted more output from this man.  An odd bit of trivia about Mr. Kuttner is that much of his work was written in tandem with his wife, C. L. Moore, under Kuttner’s name as well as several pseudonyms.  After Kuttner’s heart attack, she continued to teach his English course at USC, but never wrote fiction again.
As a fan of H.P. Lovecraft’s weird works, it was cool to see that Henry Kuttner was one of the writers in the “Lovecraft circle.”  This was a group of Lovecraft admirers that shared correspondence with the author.  Kuttner also wrote several “Cthulhu Mythos” stories set in the weird world that Lovecraft had created.  I am going to have to dig them fools up and check them out!  There is always someone new to discover.  Those who think they have read or seen or heard it all are no longer trying to discover anything new.  Their brains are slowly petrifying, and after a certain point it may be irreversible.