J.B.S. Haldane had ideas as to what the Future would hold. 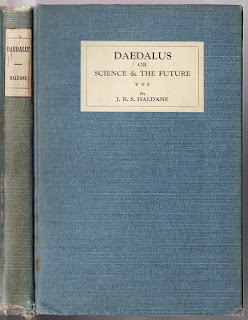 This is yet another great recommendation by the one and only Rudy Rucker.  Whereas my previous review was of a large compendium of philosophy relating to the topic of panpsychism, this is a short and tight book, complied from the speech given by noted English scientist J.B.S. Haldane to an audience at Cambridge University.

The year was 1924, the Great War was over, and scientists had been grappling with new advanced discoveries in physics, biology, and medicine.  Mr. Haldane used his platform at this Cambridge meeting of scientists to deliver a predictive talk.  In the course of this short book, Haldane discusses so many possible outcomes for the study of science.  A few were bound to be wrong.  Just as many of them were correct.  He was the first man to utilize the prediction that England’s coal and petrol reserves would not last  beyond a few hundred years, and provide alternative methods by which energy could be harnessed, and the soot and smoke of coal and petrol fires be banished forever.  His idea was that in the future, England would be dotted with giant metal wind turbines, which would rotate, create electricity, and then be stored to be used in breaking the atomic bonds of water, creating vast amounts of oxygen and hydrogen.  Hydrogen is the most efficient energy storage material there is.  Petroleum, gas, and even nuclear fuel, are not as efficient in creating heat and energy.  J.B.S. Haldane would have been excited to drive through the deserts of west Texas, seeing the thousands of non-polluting wind turbines creating electricity through renewable resources.

He discusses the vast difference in life expectancy that the medicine at his time had achieved.  Just a hundred years before his birth, a man was lucky to live to age 40.  He stated how this life expectancy shaped so much of the world in England.  A man, upon his death, would pass on his lands to his eldest son.  When a man lives to 40 or so, his oldest son will be around 20, and will have no experience of anything other than running the family estate/business/farm.  However, when life expectancy increased, men lived to 80 years old, dying and leaving their estates to men who were in their 60’s, had fully developed personal lives and families, and would likely not know anything about how to run the family enterprise, having had to make a living outside of it for 30-40 years.  These seemingly small things, such as vaccination, pasteurization, and hygiene, have massive effects on the world we live in.

J.B.S. Haldane continues on to describe possible future outcomes based on the expected progress of scientific achievement.  He discusses so many things, in such a short amount of text, that it is truly an amazing speech.  It should have blown away anyone who heard it at Cambridge back in 1924.  He even describes his use of Daedalus as his theme, for he saw Daedalus as the first truly modern human in myth, unconcerned with the will of gods, or the whims of fate, but instead using his mind and reason to make sense of the world around him and to control it.  Too often, his story is told solely based on the myth of his son Icarus flying too close to the Sun, and plummeting to his death as a result.  However, Daedalus was an engineer, an architect, a biologist, a surgeon, and so much more.  It is a cool reminder that myths are valuable because of the richness of meaning found within, and not just solely for moral lessons.  This would be a cool book for young researchers and scientists to read.  I think it would help focus their goals to the betterment of humanity.  It would also help them understand that, while we stand on the shoulders of giants, we ourselves are the giants that the next generations will be standing upon.

(This speech can be read in full here: https://www.marxists.org/archive/haldane/works/1920s/daedalus.htm )
Posted by Rob Instigator