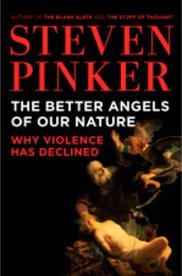 The Better Angels of Our Nature: Why Violence Has Declined – Steven Pinker (2011)

Living in our world today presents a duality that we all must cope with.  Firstly, we now live in a time where fewer people are living in extreme poverty than ever before in our collective history.  Humans are living to older ages than ever before.  Humans have managed to engage in worldwide trade and diplomacy, and do so with the minimum of force or violence.  Secondly, we now have the ability to be informed about every single horror that occurs anywhere on our planet within seconds of its happening.  We have the ability to detect more and more varieties of cancer and disease.  We also have a never-ending news cycle that will repeat ghastly news over and over again, giving the impression that everything is chaos and horror.  These two sides of our world fight for our collective consciousness.
Many people claim that humanity has degraded over the eons, beginning in a pastoral and peaceful existence, and ending in our constant competition for resources, bringing wars, violence, and terror to the people.  What Steven Pinker has done in this amazing book is gather up the data available to show that, as a whole, and throughout all of humankind, our collective violence has actually decreased due to the evolution of our collective humanity.
Pinker explores the many methods by which violence is categorized and quantified, and proceeds to regale the reader with 8 chapters of the most brutal history of human violence upon ourselves, animals, and the world around us.  He details everything from state sponsored war, to individual acts of murder and violence.  In each instance, these violent acts have drastically decreased throughout the world.  Even in the most remote and government-less parts of Earth, violence has decreased.
It is hard for a modern human to consider how horrible it was to exist a thousand years ago, with our knowledge of world wars, genocide, and other horrors fresh in our collective minds.  Pinker describes exactly how dangerous it was to be a human being at various points in our past, both distant and recent.  In fact, up until very recently indeed, most humans died before the age of 30, and a person reaching 50 years of age was considered ancient!  These days, we all expect to live to 80 and worry a ton about “premature” death, as if death was something we all have on a schedule like lunch or nap-time.  This bias comes specifically from how safe and non-violent our day-to-day world is.
One of the most important conclusions from this research is that, as the world becomes less religious, it becomes less violent.  In previous eras, when religion was state-sanctioned, and belonging to a different religion regularly meant death, or at best, banishment, the ease by which humans saw other humans as NON-humans is evident.  Religion also taught men to subjugate women, and to approve of using “lesser humans” as slaves, for their god told them it was A-OK.  The worst were states where the religion controlled the politics.  These provided humanity with extreme cases of genocide, mass-murder, and the infestation of violence.
Violence was so pervasive in our past that people writing contemporaneously did not seem too bothered by public torture, public executions, and the display of endless gore and violence.  Every ancient culture had blood-sports, from the Romans and their gladiators, to the British and their bear-baiting. (Bear baiting is when a bear is chained up and then feral wolves or dogs are dispatched to attack the bear, and everyone had a blast watching dogs and bears get ripped to shreds in horrible ordeals of pain and gore.  The British LOVED this, and they were all very religious!)
What Steven Pinker has done here is provide factual, well-researched data to help spread the enlightenment and humanist ideas that have managed to make our current time the least violent of all.  It is a heavy book, and quite depressing at times, but the knowledge that we humans seem to be heading towards a less violent and more constructive existence is something that lifts my spirits.

(This book is available for purchase here: THE BETTER ANGELS OF OUR NATURE  )
Posted by Rob Instigator