Our universe is not "The Universe." Get over it. 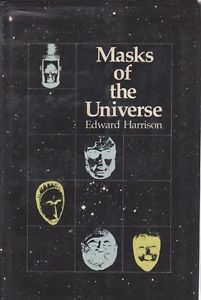 I have always been very curious when it comes to the subject of perception.  Perhaps this comes from having worn eyeglasses from a very early age, but the awareness of difference in perception between two people probably began there.  Even now, after over 4 decades of living, I find it very hard to adequately explain how frustrating it is to me when I am not wearing my glasses to someone who has never worn them before.  This glitch in communication magnified a thousand-fold, is what occurs when people who live in a Christian universe attempt to merge their world-view with someone who is Hindu, or vice versa.  We all assume that the universe we experience every day is the same universe that others live in, and any inconsistencies are tossed off by assuming the other person is mistaken, or deluded, or just plain stupid.  What Edward Harrison discusses in this cool book is the difference between the personal universes we as people and societies create and live in, and the Universe at large which encompasses all of existence.
Mr. Harrison draws a distinction that is critically important.  An individual’s view of the world at large, and their place in it, is labeled a “world picture.”  Each of us carries a world picture in our minds that defines the universe around us, changes due to new stimuli, and is based on our personal experience, as well as the education/indoctrination that we receive about the universe we all share.  A lower-case “universe” is the collective ideas of the culture and society that an individual happens to find themselves living in.  For example, a human living in NYC in 2016 lives in a universe that is “explained” by science, contains very little overt religion compared to past universes, is run by our supposed “free will,” etc.  500 years ago however, the average human being lived in a universe where any event was ruled by mysterious unseen demons or angels, where free will did not exist, where life was brutish and short and meant only to wait until death and eventual entry into an afterlife.  Two thousand years ago the average human lived in a universe where gods were abundant, fought each other, had petty human qualities, and where the appropriate ritual or incantation to the proper god would guarantee a good harvest.  Each of these universes were self-consistent.  The ideas we now think are stupid were seen as “common sense,” and to question them could, at times, send you to your death as a heretic.
What is urgently explained by Mr. Harrison is that our current universe is also not The Universe, but yet another filter by which we view ourselves and our world, and our place in it.  In the future our universe may be seen as ridiculous and wrongheaded, just as we see the universes of past people’s sometimes.  The Universe itself never altered, but our human-created vision of what the universe is and was changes as humans develop intellectually.  One big problem is that humans very rarely are able to step outside the confines of their world-picture to see the bigger universe they collectively reside in, or to step out of their culture’s universe to grasp things at the level of The Universe.  Not all universes are beneficial to humanity, just as some world-pictures are twisted and demented.  For 400 years the western world lived in a universe where witches and Satan were active players in day to day life, where no matter how many innocent people were burned at the stake for witchcraft, the Inquisition would always find more and more.  This was a universe in direct odds with the one described in the Bible, but by this time the word of theologians and church leaders took on more weight than the very scripture they supposedly based their religion on.  Corruption can affect even whole universes of thought.
Books such as these are invaluable to me because they help remind me that those people who seem ignorant because they espouse a world-view that I do not follow or agree with, are all floating around in a universe they did not create, and which they are grasping to understand, just like we all are.  It also helps me somewhat understand the minds of the early humans and the universe they lived in, before organized religion or a designated order of humans who are the intermediaries between humanity and the gods.  The universe that ancient humans lived in was alive in ways that our universe cannot approximate, and which will never come around again.  Each universe is self-consistent.  In a universe where witches run the show, you will find evidence of witches everywhere you look.  In a universe where all things are divine and have a spirit/soul then it makes perfect sense to worship the cave in which you found shelter, or to yell at the rock which stubbed your toe, so it knew you were mad and would never do it again.
At least one soothing thought comes to my mind.  The Universe has been and is and will be here whether or not our own personal universes are true, or whether our world-pictures are erroneous.  Life, energy, matter, and everything that comes with them are an inherent part of The Universe, and our “universes” are the mental structures that us humans create to try and make sense of The Universe, of which we will only ever be allowed an exceedingly tiny glimpse at.  Better a tiny glimpse than no glimpse at all!